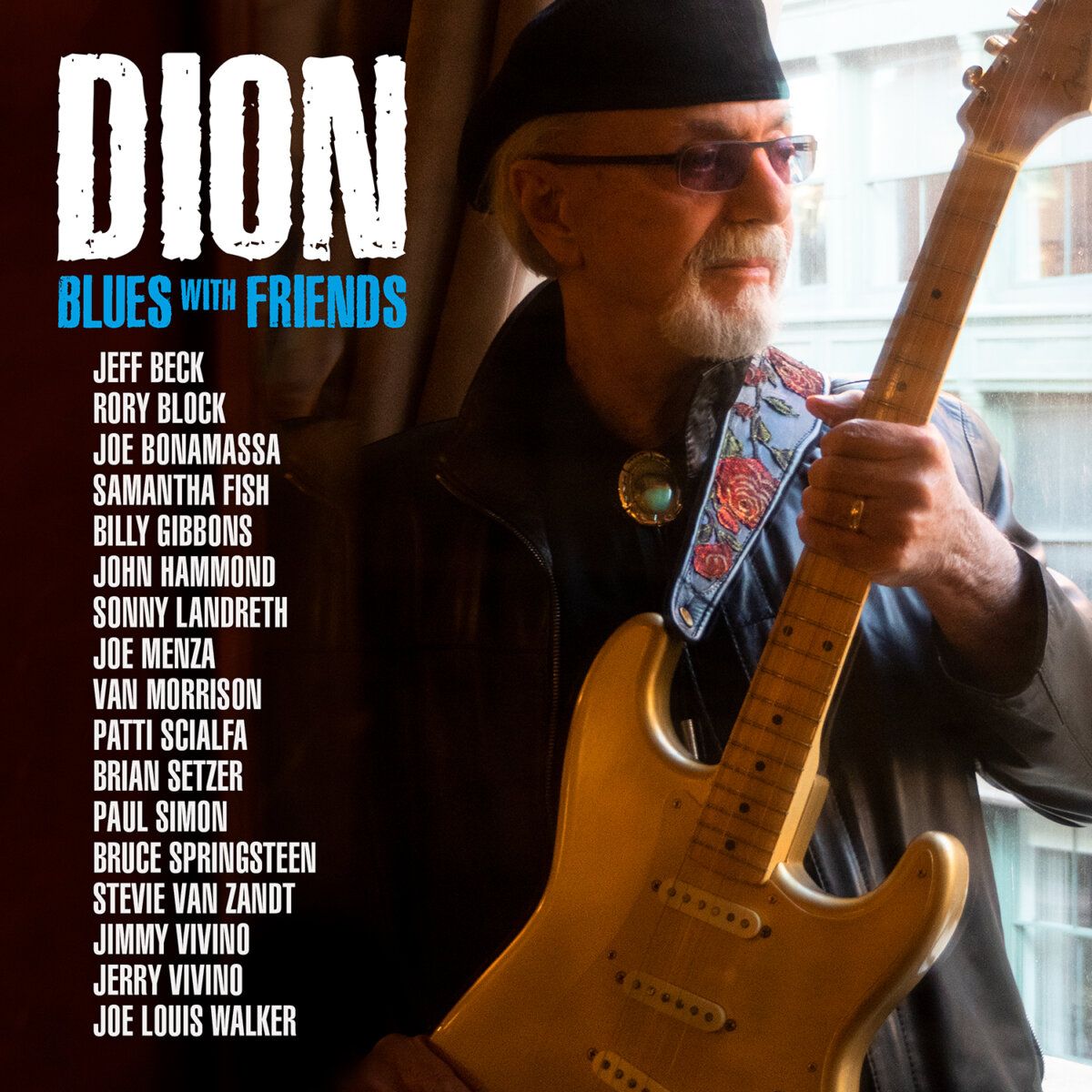 Dion’s Blues With Friends, CD out June 5, represents the fulfillment of a lifelong vision. Dion explains the album’s impetus, “I wanted an album of songs that were strong and memorable and told stories that were worth telling.” His songwriting efforts were supported by a cadre of great players, each of whom jumped at the chance to collaborate with a music legend they think of in heroic terms. He’s quick to point out just how enduring this creative relationship has been, “The blues have been at the heart of my music since the early 1960s. ‘The Wanderer’ is a twelve-bar blues and I was covering Willie Dixon and Jimmy Reed in my early years at Columbia — much to the dismay of my corporate masters.” That’s the way it’s long been for the man Lou Reed inducted into the Rock and Roll Hall of Fame more than thirty years ago. That night the normally taciturn Reed exalted, “And then there was Dion — whose voice was unlike any other I had heard before — a voice that stood on its own, remarkable and unmistakably from New York. Bronx soul.”

As one of the very few first-generation rock ‘n’ rollers still seriously pursing new avenues of expression, Dion’s Bronx soul is very much in evidence on this new album, a full-tilt blues offering. The blues songs therein are not “covers” nor Dion’s versions of blues standards. These compositions are, in fact, blues originals, destined to become classics in their own right. He came up with the music and words for twelve of them and finished those with co-writer Mike Aquilina. The two exceptions are “Hymn
To Him” which Dion wrote with Bill Tuohy and “Kickin’ Child,” written with Buddy Lucas.

To tell those stories, Dion recruited help from a few notable friends and admirers. He thought, “I needed to round up the best guitarists and musicians alive and pick them from every generation, every variation of blues.” And that’s just what he did, surrounding himself with those who feel the blues spirit as he does.

The album’s guests include the cream of the contemporary scene’s blues-rooted slingers including Jeff Beck, Billy Gibbons, Joe Bonamassa, Brian Setzer, Sonny Landreth, Samantha Fish, John Hammond Jr., Joe Louis Walker, Rory Block , Jimmy and Jerry Vivino, vintage guitar guru Joe Menza as well as icons Stevie Van Zandt, Patti Scialfa, Bruce Springsteen, Van Morrison and Paul Simon. Yes, that’s a whole lot of star power but each participated not because of his or her marquee appeal but because of what each could add musically. The result is one reflective of nuanced devotion to the blues rather than a gratuitous display of individual virtuosity. It’s very much Dion’s album and those bold face names participating are most convincingly there for him.

For this outing, Dion worked with producer Wayne Hood in whose Florida studio the basic tracks were recorded. “From the first day, I was at home. We hit it off like brothers on a mission. We caught the same vision and sound and off we went.” Over the course of the last part of 2019 and the first part of 2020, the album began to take shape. Dion had the songs and the collaborators began to reveal themselves. As Dion tells it, he ran the album’s first track, “Blues Comin’ On,” past Joe Bonamassa. He noted, “It’s funny how a song evolves. For me it usually starts with a few words. In this case it was “If I didn’t know better” wanted to sing those words, so I wrote a song around them. Joe Bonamassa is a monster and took the song to a whole new level.” Joe would be the first of many of Dion’s Blues With Friends co-conspirators.

Ever the no-nonsense sage, Dion bottom lined just what makes Blues With Friends a project for the ages: “Great songs, great guitarists. What more do you need?” he asks.

Dion’s Blues With Friends will be released on June 5th through Keeping The Blues Alive Records, a new label started by Joe Bonamassa and his manager Roy Weisman and is an offshoot of Keeping The Blues Alive Foundation, Bonamassa’s non-profit that aims to conserve the art of music and the rich culture and history of the blues. The label’s objective is to provide a platform for musical talent in blues and blues-rock based music and to help encourage the careers of extraordinary musical talent. 10% of all profits from the label will be donated back to the Non-Profit for promoting music education to students and schools in need. The album will be preceded by a staggered release of album singles as follows: 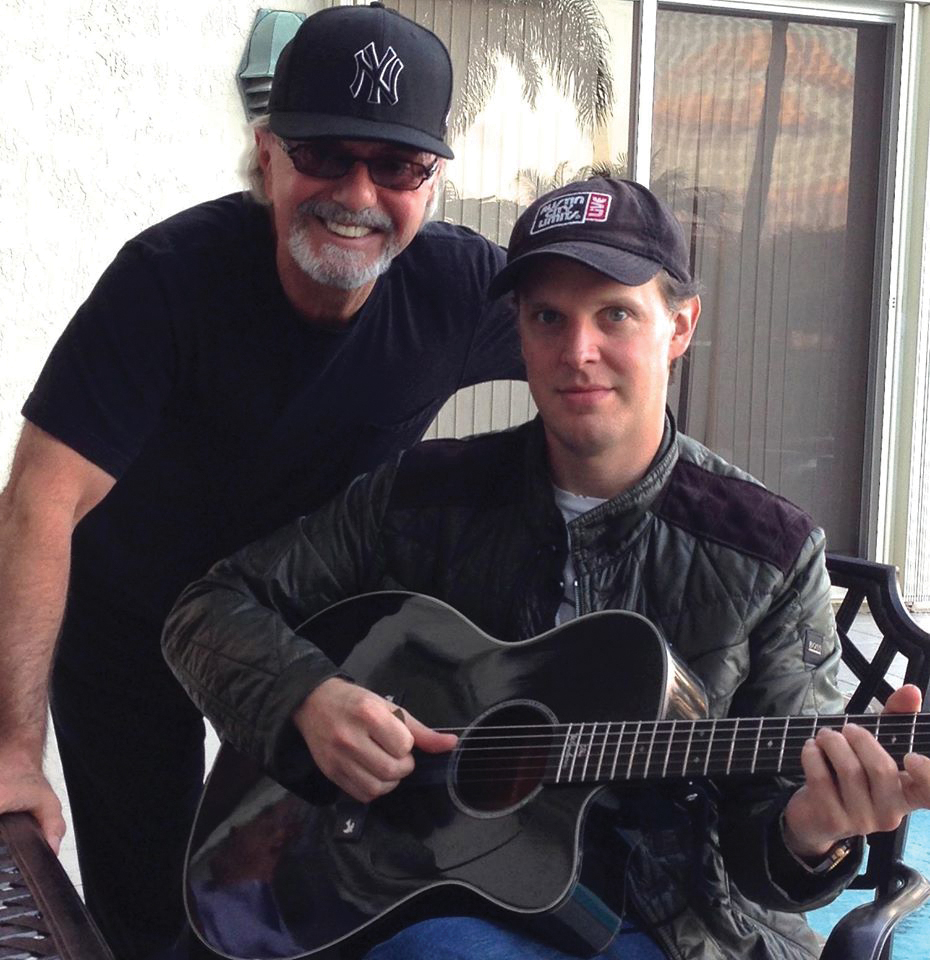 In addition to the aforementioned “Blues Comin’ On,” Dion provided some analytical introspection for the album’s other thirteen tracks, all guests on guitar unless otherwise indicated.

“Kickin’ Child” (with Joe Menza) “I was the first rock-and-roll artist signed to Columbia Records, but they thought rock was a passing fad and wanted me to be the next crooner of standards from the Great American Songbook, but I wasn’t going there. I recorded what I wanted, and it mostly stayed in the vault. I first wrote and recorded this song in 1965; Tom Wilson produced a version of it. In 2017 I released an album with “Kickin’’ Child” as the title track but it wasn’t where I wanted it, so I rerecorded in here. Joe Menza knew where I wanted it to go.”

“Can’t Start Over Again” (with Jeff Beck) “My earliest influences were country blues, especially Hank Williams. Any money I earned I took to the neighborhood record store, where the owner used to razz me about my “hillbilly” tastes. I guess I still have that hillbilly inside. For my last album I wrote a song called ‘I Can’t Go Back to Memphis,’ but I go back there with this number. It’s about love and loss and heartache, the classic themes. I believe it’s a true blues song. I asked Jeff Beck to play something on it, he said yes! What can I say, it’s Jeff Beck.”

“My Baby Loves to Boogie” (with John Hammond Jr., harmonica) “John Hammond and I go back to the ’60s at the Gaslight coffee house in Greenwich Village. I’ve always admired John. He’s a dear friend. I played him this song and he said he heard harp on it. Well, friends, now you could hear exactly what he was talking’ about. It sounds like “Boogie Beyond.”

“I Got Nothin’” (with Van Morrison, vocals, and Joe Louis Walker, guitar) “You know when you sit down and you want to write a song, but nothing comes to mind? I was having one of those days. So, I went with the feeling and this is what I got. I got nothin’, and nothing is enough! It’s more than enough, actually, when you’re singing it with Van Morrison and Joe Louis Walker complemented us perfectly.”

“Stumbling Blues” (with Jimmy Vivino and Jerry Vivino, sax) “This is one of those melodies that came out of nowhere and it feels like it’s been drifting on the wind since the beginning of time. It’s built on a classic blues progression. I didn’t really hear it till I was sitting in Van Morrison’s dressing room and he asked me to play something new. For whatever reason, I knew while I was singing it that it was something extraordinary.”

“Bam Bang Boom” (with Billy Gibbons) “This is another song that started as phrases I wanted to sing. ‘I stepped into love.’ The lyric does a good job of describing what happened when I first met Susan. We were both teenagers. She was new to my very Italian neighborhood in the Bronx and she was a redheaded transplant from Vermont. Bam bang boom! Billy Gibbons was a joy to work with on this. There’s nobody like him.”

“I Got the Cure” (with Sonny Landreth) “The blues aren’t always about being down and out. When you aren’t crying, you’re bragging about what you can do. It’s what I did in songs from ‘The Wanderer’ to ‘King of the New York Streets’ to “Gangster of Love.’ Here I go again.”

“Song for Sam Cooke (Here in America)” (with Paul Simon, vocals) “I wrote this tune back many years ago. At first I just had the melody and the refrain ‘Here in America.’ A friend suggested I use an episode from my memoir about walking southern streets with Sam Cooke in 1962. I finished the song, but it felt too personal, so I put it aside. Then in 2019 I saw the movie Green Book and after that I couldn’t shake the song. My friend Paul Simon wanted to record it what he was hearing on the tune; it’s a story we both share. Thank you Paul. Rest in peace, Sam.

“What If I Told You” (with Samantha Fish) “Same old story: suspicion. The challenge is to make it new and fresh and I think I did. If I put out the same amount of energy and emotion that Samantha Fish put into this song, I wouldn’t be able to walk for three weeks. EPIC!!!”

“Told You Once in August” (with John Hammond, slide guitar on right, Rory Block, slide guitar on left and vocals) “One of my favorite guitars is a little Cordova travel model that I bought for practically nothing. One day I was fooling around on it and I got this sound that reminded me of those old backwoods Appalachian blues recordings. I tried to capture the slow anger of a man who gradually realizes he’s been done wrong by his woman.”

“Way Down (I Won’t Cry No More)” (with Stevie Van Zandt) “It started with a rhythm. It got me and wouldn’t let go. My dear friend Stevie Van Zandt just rocked it with his grit and nasty grunge guitar. We had a lot of fun in the studio and then we went out to eat to celebrate.”

“Hymn to Him” (with Patti Scialfa, vocals, and Bruce Springsteen, guitar) “I first recorded this song for my 1987 gospel album Velvet & Steel. But songs are never finished… I kept hearing this with Patti’s voice, so I asked her to help me remake the song. When she started singing and layering her vocals down, I got a big surprise. Bruce walked into the studio with his guitar and asked to play a solo. They made it something sublime.”

“Dion knows how to sing, and he knows just the right way to craft these songs, these blues songs. He’s got some friends here to help him out, some true luminaries. But in the end, it’s Dion by himself alone, and that masterful voice of his that will keep you returning to share these Blues songs with him.”
Excerpt from Bob Dylan’s liner notes for Blues With Friends

Blues With Friends is available for Pre-Order worldwide at: KTBArecords.com