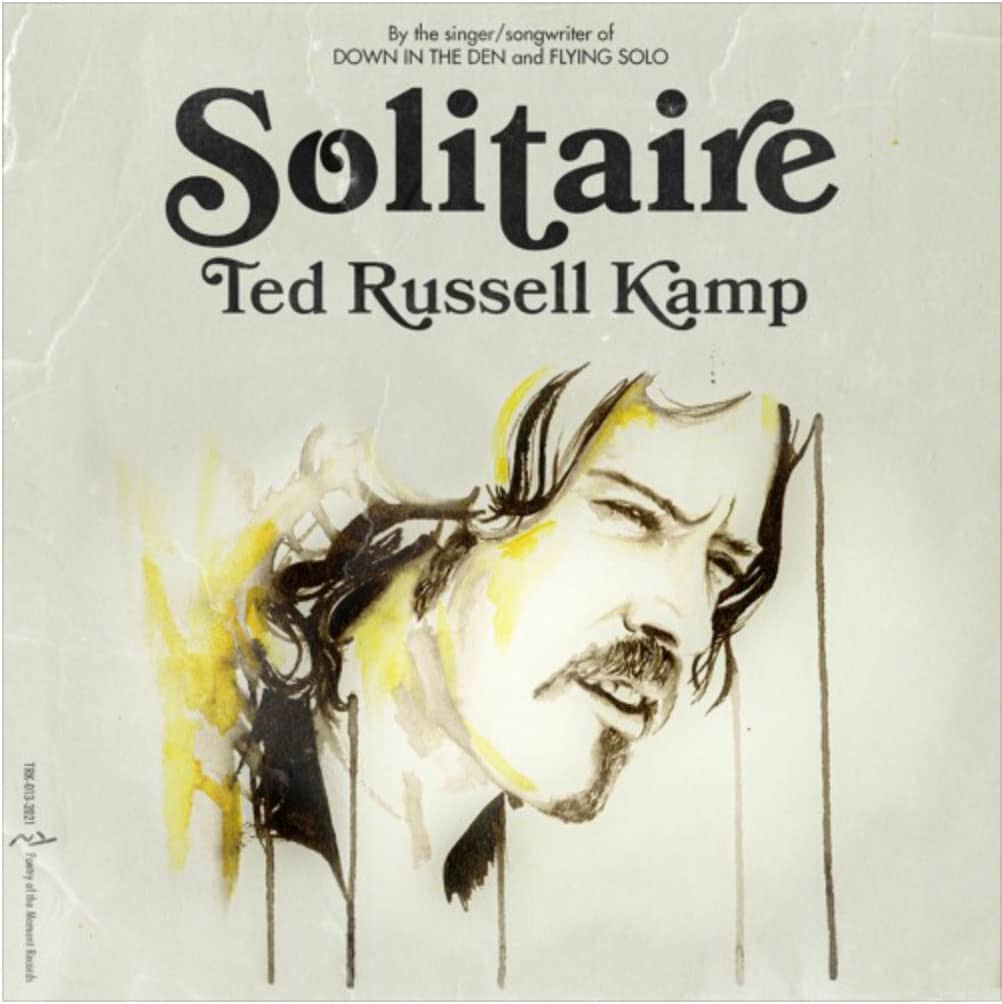 Seeking Comfort In Soulful New Music During These Hard Times

Before the pandemic, Ted Russell Kamp traveled the world playing about 200 shows a year, playing his own blend of roots and Americana music as well as being the longtime bass player for Shooter Jennings. He also began working as producer in his home studio—The Den – where he has now produced numerous well-received albums for fellow artists such as Emily Zuzik, Funkyjenn, AJ Hobbs, Creekwood, Brian Spence, Travis Napier, Rayna Day, Richie Allbright, Grant Langston and more. When the pandemic hit, it was The Den where Kamp found his haven to craft and cultivate the songs that would become his latest record.

Solitaire is Kamp’s 13th full album release. It consists of 14 songs recorded mostly alone at home during the last 9 months of the lockdown. The songs and overall feel of the album have a more intimate and singer-songwriter quality. Kamp wanted them to sound more like solo performances, but with some extra spice added, reflecting the loneliness of being at home in quarantine: isolated from friends and the chance to play live. “I think it echoes what a lot of us have been going through this year; the loneliness and doubt as well as the day dreaming and not wanting to give up. I wanted to put these songs out there because we have all been going through similar things.”

The music on Solitaire is indeed 90% Kamp as he plays a majority of the instruments on the album but he has again collaborated with several artists and friends known in the Americana genre, but this time remotely. “Almost everything I did was in my studio with all of the guest overdubs recorded by them in their own home studios. This was a true quarantine record in that sense. Most played or sang harmony on just the songs I wrote with them.” But to create the sound of a full band at times, Kamp had “just a few socially distant recording sessions, with John Shreffler (harmony vocals, pedal steel), Jim Doyle (drums) and Brian Whelan (harmony vocals) to be a part of several tracks of the album. It was an incredible breath of fresh air to actually see friends again and to reconnect and play with them.”

The first track on the album, “My Girl Now” was actually a song co-written several years ago by Kamp and Micky Braun from Micky and the Motorcars (and was included on their 2014 album, Hearts From Above). Kamp’s version has a less twangy and more buoyant chorus, adding elegance to the song.

“Path of Least Resistance” uses only electric bass and acoustic guitar, giving it a vintage folk feel, and on “You Can Go To Hell, I’m Going To Texas” (written with the ladies of Granville Automatic) you hear a distinctive California country rock sound.

Kamp wrote the gospel-sounding “As Far As The Eye Can See” with pal, Matt Szachetka and is one of the few songs on the record featuring mainly bass and vocals, a minimalist approach that has become one of Kamp’s trademarks. The folky, “Western Wind” was written via a FaceTime session with co-writer Shane Alexander who then sang harmonies on the songs, as well.

“Exception To The Rule” was written with Ed Jurdi (Band of Heathens) on some downtime at a music festival in Mexico they played together last year. They revisited and reworked the song via email and then Ed added his harmony vocals and a delicate George Harrison style slide guitar solo. The bonus track, “Lightning Strikes Twice” is of note, as it’s the first bluegrass song Kamp has written and he played every instrument on the track.

Some of the other artists Kamp collaborates with on Solitaire include; Josh Morningstar, Braid Raisin, Mark Mackay, Tony Scalzo, Pete Murcott and Don Gallardo, but on the title track, Kamp is the only writer and performer—just an acoustic guitar and his vocals with no guests and no overdubbing. “This is one of my favorite songs on the record and from a songwriting perspective, the one I’m most proud of,” he confesses. “I was actually playing a lot of the card game solitaire the first few months of quarantine and thought that it would be a great album title for being at home in a kind of solitary confinement. Then I got the idea to write this song.” At this point in modern life, anyone can relate to these lyrics: “I got something on my mind been trying to find the words–one leads to the next then they scatter like the birds–fighting with a feeling like I’m alone inside a maze–don’t know what’s in the cards but I been circling round for days”.

Kamp’s last album, Down in the Den was a very fully arranged full band record with lots of guests, horns, guest vocalists and instruments, while Solitaire reflects Kamp almost solely on his own.  “Knowing I was recording an acoustic, moody record like this also helped me choose the songs that I knew would work well arranged this way,” he explained. “I think it’s very different and speaks to what a lot of us have been going through this year. I wanted each song to feel different so I added mandolin, dobro and banjo to some – and Wurlitzer , accordion and Hammond to others. It’s also the first time I played my old dulcimer on a record. When I start touring again, most of these songs will be great additions to my solo show and some will also be great for my full band electric sets. It was really satisfying using the quarantine to write on my own, but also to co-write and reconnect with friends as we were all going through a hard year.”

Solitaire provides Kamp with yet another approach to his music, but ultimately it’s connecting with his audience that matters to him most.

Ted Russell Kamp – Down In The Den