Ted Russell Kamp – Down In The Den

A ROOTS ROCK COLLABORATION FULL OF SOUND AND SOUL 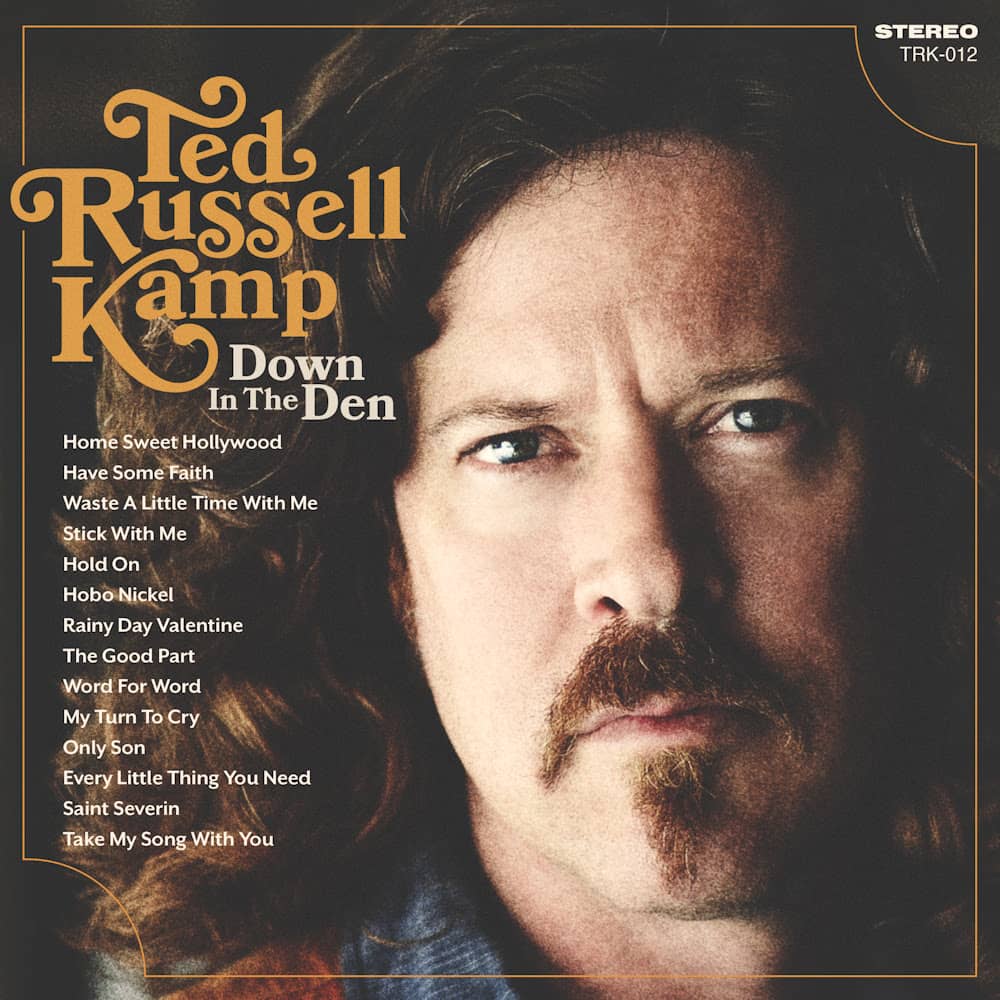 Ted Russell Kamp is a musician who wears many hats and all of them well. Aside from focusing on his own career, he is a well-known bass player holding down the bottom end for bands as diverse as Shooter Jennings, Jessi Colter, Whitey Morgan, and others.  He recently played on the 2020 Grammy winning Country Album of the Year, Tanya Tucker’s While I’m Living and has produced several well-received albums for fellow artists, working out of his home studio, known as The Den.

Kamp writes, records and travels the world performing his own brand of country/roots/Americana music and Down in the Den marks record number 12 with Kamp as the artist and frontman. Down in the Den is a 14-song record featuring Kamp playing bass and singing lead vocals on all of the songs. He also plays acoustic guitar, keyboards and percussion on most of the songs as well as adding his trumpet, trombone, dobro and banjo to the mix.  Some familiar names in the Americana genre add their talent and/or voice; Jon Schreffler, Matt Szlechetka, Bart Ryan, Brian Whelan, Jamie Douglass, Eric Heywood, Sarah Gayle Meech, Kirsten Proffitt, and more (see credits for full list).

“I am co-writing more now than I used to,” Kamp acknowledged. “I had a publishing deal in Nashville for 4 years and really liked co-writing.  I work a lot playing in the Shooter Jennings Band and with other people and I spend a lot of time producing records for other people, so I don’t often have time to write on my own. I’m also a very social and collaborative person. Creating a song with someone based on our conversation and common experience has been really wonderful and valuable for me.”

Down in the Den has more of a soul and New Orleans influence than many of Kamp’s earlier records.  Trumpet was Kamp’s first instrument and he brought back his Dad’s old Conn trumpet for this record. “It was my Dad’s trumpet that we both played in our high school and college years. I also play an old valve trombone that was given to me by one of my Dad’s old jazz-loving friends.  It was apparently owned by a trombone player for KC and the Sunshine Band and the backstage pass is still in the case.”

“Originally this was going to be a real Memphis Southern soul record,” Kamp added.  “Some of the first songs I wrote for it were ‘Word For Word’ and ‘Every Little Thing You Need’ and I even considered naming the record “Ted in Memphis”. Then I realized I wanted it to be a more eclectic record so I could include some more of the sensitive singer-songwriter moments like, ‘Take My Songs With You’ and ‘Stick With Me’. I definitely wanted to lean towards soul and gospel still with songs like ‘Hold On’ and ‘Saint Severin’.”

Shooter Jennings duets with Kamp on the lead track, “Home Sweet Hollywood”—a tongue-in-cheek song about keeping the music more important than the money or accolades. “You can find a gig or maybe get a new rig/put a studio in your garage/You gotta live it, love it, never get enough of it/’cause fame is a mirage”.

“Stick With Me” is one of the first songs on any of his albums where Kamp is using the fingerpicking guitar technique and “Hobo Nickel” has a rare banjo performance from the artist. “The melody for the verse on ‘Hobo Nickel’ came to me first and I wanted to write a cool Mungojerry ‘In The Summertime’ kind of song.  Then I read an article about an annual Hobo festival in Iowa and got really inspired and started learning about the era of the American hobo,” Kamp noted. “Then I wanted to write a song about a Zen hobo/traveller as a metaphor for me as a traveling musician.  I had the first few verses and then finished the song with Brian Wright, a friend and great musician and songwriter from Nashville.”

“Take My Song With You” is the last song on the record and was written with Kirsten Proffitt who duets with Kamp on it, as well). “I really like this song as a sentimental closer to the record,” said Kamp. “It kind of says thanks for listening, I hope this music can provide a little comfort and help you through some hard or lonely times.”

The fact that Kamp can play many genres of music convincingly and then blends them all is an impressive feat. It makes him harder to classify as a musician—he’s not a blues guy or a country musician or a classic singer-songwriter with an acoustic guitar. He is a combination of all of them.

“There are only a few truly visionary artists like Hendrix, The Beatles, Frank Sinatra or Brian Wilson. For the rest of us, the key is combining the things we love, adding our story and tastes and making what music that only we can make. What inspires me to do this is sheer joy and satisfaction of coming up with a new riff or progression or poetic little idea and then following where it leads until it’s a song. Then bringing it to life when I play it with other musicians and record it and finally having other people listen, enjoy it and get moved by it is truly amazing.   I think this is a soulful and beautiful record with some really well-written songs that I’m very proud of.”

Ted Russell Kamp
Down In The Den