The Mannish Boys – Shake For Me (CD)

THE MANNISH BOYS
“SHAKE FOR ME”

“It is both refreshing and encouraging to see a song selection that favors
a broad range of little-known gems respectfully presented by a deep
stable of talent.” – Living Blues Magazine

2010 heralds the passing of the five year anniversary mark of the birth of Delta Groove Music. Likewise, The Mannish Boys, for whom the label was originally conceived, are similarly celebrating five years of electrifying the blues for audiences the world over. The fundamental concept of the band was simple; assemble a group of like-minded musicians to capture the spirit and joy of this timeless music, and reintroduce it for a whole new generation to appreciate and discover. This project, which was only initially envisioned as a one-time testimony to the power of the blues, has now given way to a new institution privileged with the task of preserving this music and presenting it as a vital, living, breathing entity.

The Mannish Boys fifth album, “Shake For Me,” carries forth the tradition established by their very first effort, “That Represent Man,” by presenting an inspired program of deep, lowdown blues supported by a surprising and ever-revolving unit of world class musicians. Reprising their all-star roles in the band are Finis Tasby, Bobby Jones, Kirk Fletcher, Frank Goldwasser, and Randy Chortkoff, joined here by an entirely new and outstanding rhythm section comprised of Willie J. Campbell on bass (The James Harman Band, The Fabulous Thunderbirds) and Jimi Bott on drums (Rod Piazza & The Mighty Flyers, The Fabulous Thunderbirds, Woodbrain).

As is customary on any Mannish Boys release, special guests abound. Rounding out the party for this truly distinguished gathering and cause for celebration are Rod Piazza, Johnny Dyer, Mitch Kashmar, Lynwood Slim, Arthur Adams, Kid Ramos, Nick Curran, Mike Zito, Fred Kaplan, Rob Rio and Andy Kaulkin. But no festivity would be complete without at least one surprise party crasher and with that the Boys proudly introduce Dutch harp player and singer extraordinaire Pieter “Big Pete” van der Pluijm. Guaranteed to blow the roof off the joint, this towering Dutchman pays homage to Lester Butler on the storming New Orleans romp “Way Down South,” bringing to a close another chapter in what will surely be considered The Mannish Boys’ finest hour yet. 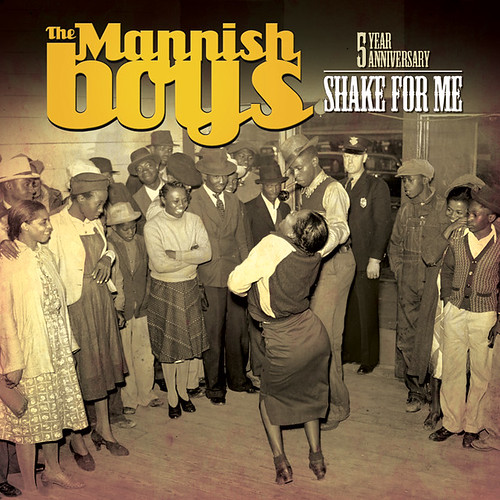 Recensie: Sugaray Rayford – In too deep