Jeff Beck is true rock legend. From his time with the Yardbirds in the sixties, through the Jeff Beck Group and throughout his solo career his unique guitar style and constant desire to explore new musical areas and sounds has won him the admiration of his peers and the adoration of legions of fans.

In 2007 Jeff Beck performed a series of concerts at the renowned Ronnie Scott’s club in London. They became the must have ticket of the year with a packed audience every night of the famous and the fans. This CD features performances recorded across the different nights and presents the best version of each track. 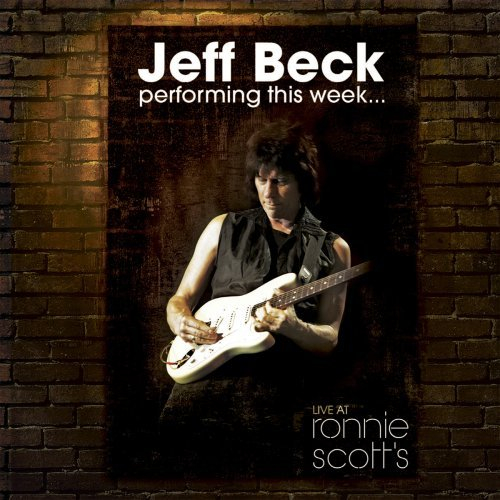 On 30 March 2009 Eagle Rock Entertainment are proud to release a sensational live Blu-ray and DVD from Jeff Beck, “Performing This Week… Live At Ronnie Scott’s”. A new Jeff Beck release is always an event and this is the first ever concert Blu-ray approved for release by Jeff Beck

[DVD released simultaneously] and includes special guest appearances by Imogen Heap, Joss Stone and Eric Clapton. This release features live versions of classic tracks from across Jeff Beck’s stellar career including: “Beck’s Bolero”, “Led Boots”, “Scatterbrain”, “Where Were You”, “Angels (Footsteps)”, “Cause We’ve Ended As Lovers” and his now iconic version of “A Day In The Life”. Eagle was the first visual music company to embrace HD and their commitment to the new technology continues with new additions to their Blu-ray catalogue.

Jeff Beck is true rock legend, described by The Telegraph as ”the first of the great guitar showmen”. Jazzwise hailed, ”an absolutely jaw-dropping display of the most exciting, imaginative and inspirational jazz-rock guitar witnessed in years.” This Blu-ray / DVD features performances recorded across the different nights and presents the best version of each track. “Performing This Week… Live At Ronnie Scott’s” captures a stunning talent at his best, The Times review of the show lauded, ”Perhaps the greatest living guitar virtuoso… Combining astonishing technique with a blissful nuance he exercised an almost supernatural control of his fretboard.”

As an exclusive to the Blu-ray release, Eagle include a seven track rockabilly set with the Big Town Playboys:
01) Race With The Devil
02) Crazy Legs
03) Train Kept A Rollin’
04) My Baby Left Me
05) Matchbox
06) Baby Blue
07) Honky Tonk.

London Lite raved about Beck’s “visceral, fluid music-making that other guitarists can only dream of”. With a stunning band complementing Jeff Beck perfectly [the full line up was Jeff Beck – guitar, Tal Wilkenfeld – bass, Vinnie Colaiuta – drums, Jason Rebello – keyboards] this is an essential purchase.

Video : Eric Clapton with The Allman Brothers Band “Why Has Love Got To Be So Sad” (Crossroads Guitar Festival 2013)