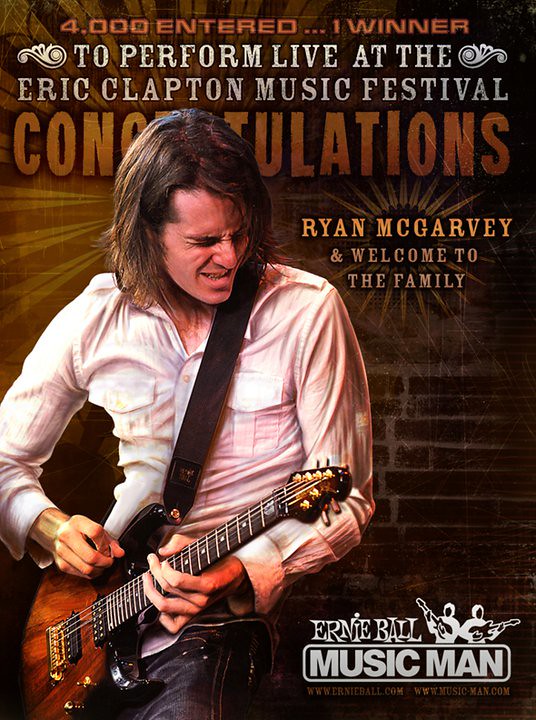 At age 23, Albuquerque, New Mexico native Ryan McGarvey has in a relatively short amount of time not only gained a national, and international fan base, but admiration from his personal idols as well. In the past few years of Ryan’s career he has had the honor, and the pleasure of sharing the bill with such top name act’s as Blue Oyster Cult, Shemekia Copeland, Shannon Curfman, Chris Duarte, Ian Moore, John Hammond Jr., Joe Bonamassa, Back Door Slam, Gov’t Mule, The Fabulous Thunderbirds, and many more. His debut CD release “Forward In Reverse” recently reached the top 20 (out of over 200,000 Artist’s Cd’s) on the best sellers list on CDBaby.com (The worlds largest online independent distributor). With rave reviews complimenting everything from his fiery guitar chops, which range from everything from delta slide to heavy rock, his unique vocals, or mature songwriting skills, Ryan McGarvey’s live shows will leave you breathless and wanting more. Absorbing influences from everything from early delta blues, to classic hard rock, to more contemporary blues/rock artist’s of today. In 2006 Ryan was named Guitar Center ’s “Guitarmaggeddon: Next King Of The Blues” champion of New Mexico . For three consecutive years (2007-2009) he was named “Blues Act Of The Year”, and was runner up for “Singer/Songwriter Of The Year”, as well as was named “Best Guitarist Of The Year” for 2009 in The Weekly Alibi’s Annual Readers Poll. In 2007 Ryan took home the New Mexico Music Award for “Blues Song Of The Year” for his song “Cryin’ Over You”, and was nominated for “Mainstream Rock Song Of The Year” for his song “The One That Got Away”. In 2008 Ryan was once again nominated for “Blues Song Of The Year” for his blues ballad “Blue Eyed Angel Blues”. Most recently Ryan was featured by the editors of Guitar Player Magazine twice during the Summer of 2008 in their publication. And, was named “Best Musician” from Albuquerque The Magazine’s Annual “Best Of The City” Readers Poll. In 2010 Ryan and his band were chosen out of some 4,000 bands (worldwide), and approved to perform a set at Eric Clapton’s Crossroads Guitar Festival in Chicago.With a solid rhythm section backing him, Ryan McGarvey and his band are embarking on bigger and better things…


“Ryan’s playing has the passion and exuberance of youth, but its further lifted by a deep dedication to his craft.
His technique is awe-inspiring, but its the dawning subtleties and emotional range that hints of the greatest possibilities–”
– Ian Moore

”Look for this young lion in the future because he’s looking for his own sound and what I’ve heard so far; I like it.”
– Chris Duarte

” I met Ryan 4 years ago and was very impressed at the depth of his influence and his ability to put said influences together in his own way..
To watch him grow as a artist and to hear his name mentioned to me as much as it has is a testament to his hard work and skill. ”
– Joe Bonamassa