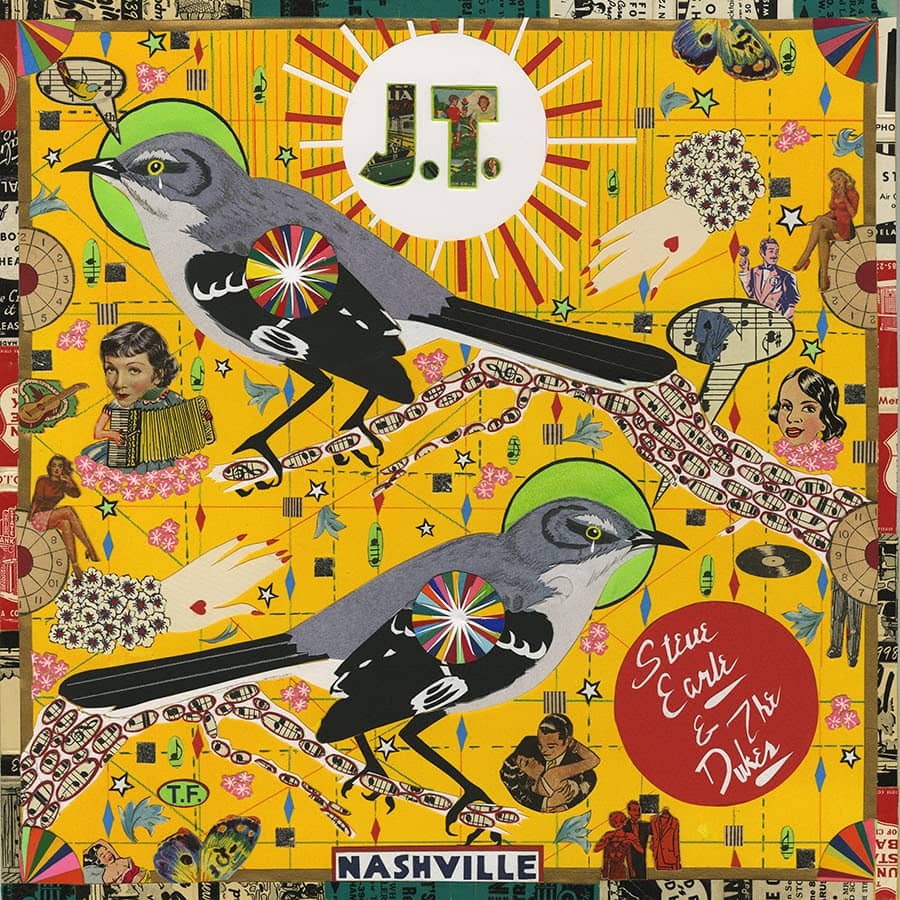 On the forthcoming album, J.T., Steve Earle & The Dukes pay tribute to Steve’s late son, Justin Townes Earle (J.T.), who passed away on August 20, 2020 in Nashville. The album will be released digitally on what would have been Justin’s 39th birthday, January 4, 2021, via New West Records.

“The record is called J.T. because Justin was never called anything else until he was nearly grown. Well, when he was little, I called him Cowboy,” explains Steve Earle. “For better or worse, right or wrong, I loved Justin Townes Earle more than anything else on this earth. That being said, I made this record, like every other record I’ve ever made… for me. It was the only way I knew to say goodbye.”

The poignant “Harlem River Blues” is one of Justin’s best-known compositions and took Song of the Year honors at the 2011 Americana Music Awards ceremony following Justin’s win in the Emerging Artist of the Year category in 2009.

J.T. finds Steve Earle & The Dukes covering 10 of Justin’s songs – from “I Don’t Care,” which appeared on his 2007 debut EP, Yuma, and a trio of selections from his full-length debut album, The Good Life (“Ain’t Glad I’m Leaving,” “Far Away In Another Town” and “Lone Pine Hill”) to later compositions like 2017’s “Champagne Corolla” and 2019’s “The Saint Of Lost Causes,” which was the title track of Justin’s eighth and final studio album. J.T. closes with “Last Words,” a song Steve wrote for Justin. See below for track listing.

Penning Justin’s obituary for The New York Times, Ben Sisario noted, “from the start Mr. Earle drew the respect of critics and a…devoted following, writing songs of heartbreak, loss and family with a dark narrative undertow and a sepia-toned folk-rock style that could hark back to Mr. [Townes] Van Zandt or Hank Williams.”

100% of the artist advances and royalties from J.T. will be donated to a trust for Etta St. James Earle, the three-year-old daughter of Justin and Jenn Earle. While somber in parts, the album is ultimately a rousing celebration of a life lived with passion and purpose. The recording features the latest incarnation of Steve’s backing band, The Dukes – Chris Masterson on guitar, Eleanor Whitmore on fiddle & vocals, Ricky Ray Jackson on pedal steel, guitar & dobro, Brad Pemberton on drums & percussion, and Jeff Hill on acoustic & electric bass.

On December 13, Steve Earle, Luck Productions and City Winery will host the 6th Annual John Henry’s Friends Benefit Concert for Autism. This year’s event will be a virtual one, featuring performances by Steve Earle & The Dukes, Emmylou Harris, Graham Nash, Jackson Browne, Lucinda Williams, Jason Isbell & Amanda Shires, and many more. 100% of donations will go to The Keswell School – an institution close to Earle’s heart at which his youngest son and the event’s namesake, John Henry, is a student. For further details, please go to luck.stream. The show is by donation.

Steve Earle is one of the most acclaimed singer-songwriters of his generation. A protege of legendary songwriters Townes Van Zandt and Guy Clark, he quickly became a master storyteller in his own right, with his songs being recorded by Johnny Cash, Waylon Jennings, Joan Baez, Emmylou Harris, The Pretenders, and countless others. 1986 saw the release of his debut record, Guitar Town, which shot to number one on the country charts and is now regarded as a classic of the Americana genre. Subsequent releases like The Revolution Starts…Now (2004), Washington Square Serenade (2007), and TOWNES (2009) received consecutive GRAMMY® Awards. Restlessly creative across artistic disciplines, Earle has published both a novel and collection of short stories; produced albums for other artists such as Joan Baez and Lucinda Williams and acted in films, television (including David Simon’s acclaimed The Wire), and on the stage. He currently hosts a radio show for Sirius XM. In 2009, Earle appeared in the off-Broadway play Samara, for which he also wrote a score that The New York Times described as “exquisitely subliminal.” Recently, Earle wrote music for and appeared in Coal Country, a riveting public theater play that dives into the most-deadly mining disaster in U.S. history. Ghosts of West Virginia, his 20th studio album, was named as one of “The 50 Best Albums of 2020 So Far” by Rolling Stone. Mr. Earle was recently (Nov 2020) inducted into the Nashville Songwriters Hall of Fame.