Recorded in Chicago’s House of Blues during the critically acclaimed 10 Days Out: Blues From The Backroads tour, Live in Chicago showcases Kenny and his band, Noah Hunt, Chris Layton, Scott Nelson and Riley Osbourn, along with special guests, Hubert Sumlin, Willie “Big Eyes” Smith,Buddy Flett, Bryan Lee and Tommy Shannon (of Double Trouble).  Though an illness nearly kept Kenny from performing that night, his heartfelt commitment to the music (and quite a lot of adrenaline) ensured that he took the stage, sharing with the audience one of the most spectacular performances of his career, and one that fans can now hear on Live in Chicago.

A genuine guitar hero, Kenny has been playing since childhood, when he learned Muddy Waters licks by listening to his father’s record collection.  By 16, Kenny had a deal with Giant Records, and recorded his first album while still in high school.  Since then, Kenny has enjoyed two platinum and one gold albums, six Top 10 singles, and his album Trouble Is holds the distinction of being the longest running album on the Billboard Blues Charts, hitting the 2 year mark.  Over the course of his storied career, Kenny has amassed four Grammy nominations, two BillboardMusic Awards, two Orville H. Gibson Awards, the Blues Foundation’s “Keeping the Blues Alive” award and a Blues Music Award.  In 2008, Fender released the Kenny Wayne Shepherd Signature Series Stratocaster.  2007’s CD/DVD 10 Days Out: Blues from the Backroads was nominated for two Grammy Awards, aired on PBS television nationwide and has been certified RIAA Gold as a Long Form Video. 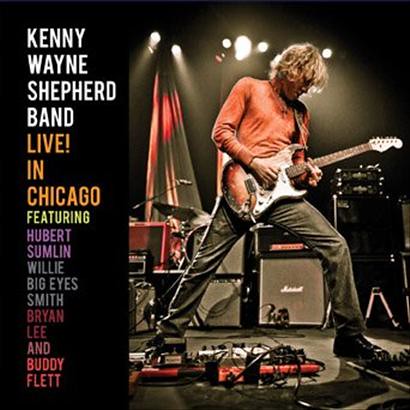 HUBERT SUMLIN
A living legend, Hubert Sumlin is a hero to all of our guitar heroes.  Growing up playing his guitar with harmonica great James Cotton, it was not long until, in 1949, at the young age of 18, he became Howlin’ Wolf’s lead guitarist, a position he held for the next twenty-five years, intercut only by a brief tenure in Muddy Waters’ band.    Hubert has also played with Pinetop Perkins, Willie Dixon, The Rolling Stones, Chuck Berry and countless others.

WILLIE “BIG EYES” SMITH
As the longtime drummer for the incomparable Muddy Waters, Willie “Big Eyes” Smith has suffused his trademark “shuffle” style into the heart and soul of Chicago-style blues.  At 17, he ventured to Chicago from Arkansas to see his first Muddy Waters performance.  Instantly hooked, he stayed in Chicago, joining Muddy Waters in 1957.  After his time with Waters, Willie found his niche in the Delta Blues sound, co-founding the Legendary Blues Band with Pinetop Perkins, Louis Meyers, Calvin Jones and Jerry Portnoy.  The band went on to win six Grammy awards, record four critically acclaimed albums and have played with Buddy Guy, Howlin’ Wolf, Junior Wells, Bob Dylan, the Rolling Stones and Eric Clapton.

BRYAN LEE
Born in Two Rivers, Wisconsin, Bryan Lee had completely lost his eyesight by the age of eight.   His early penchant for rock and blues was fostered through the 1950’s by listening late night to Nashville’s WLAC AM, where he first encountered the sounds of Elmore James, Albert King and Albert Collins.  Bryan remembers not understanding the music, but knowing that’s what he wanted to play.  By January 1982, he was headed south to New Orleans, landing a steady gig at the Old Absinthe House.  Lee performed there for 14 years alongside his Jump Street Five, becoming a treasure of the city’s French Quarter, a claim he cherishes to this day.

BUDDY FLETT
Currently residing In Shreveport, LA, Buddy Flett began his career in 1975 at the legendary Lake Cliff Roadhouse and the infamous Bossier Strip, where Elvis Presley, Hank Williams, Sr. and Hank Williams, Jr. all performed.  He has written for John Mayall, Percy Sledge, and was featured in the new documentary, Robert Mugge’s Rhythms n’ Bayous.  Flett’s band, the Bluebirds, backed Kenny on his first public performance when Kenny was only thirteen.