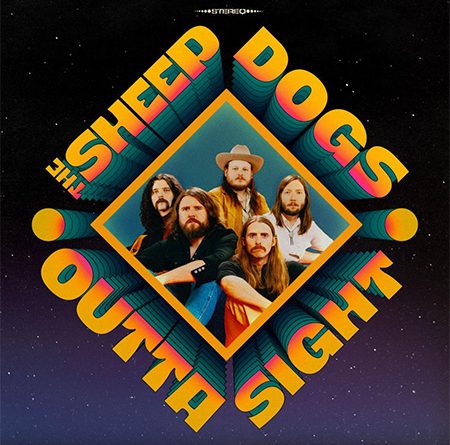 Hardworking and hard-living Canadian band The Sheepdogs took all of their pandemic-induced feelings from the past two years and channeled them into the one thing that made sense; good, old-fashioned, non-bummer rock and roll music. Hailing from Saskatoon, Saskatchewan, the band—Ewan Currie, Ryan Gullen, Sam Corbett, Jimmy Bowskill, and Shamus Currie—were, like the rest of us, confused, cast ashore, and feeling isolated during COVID, but their output during that time produced the grooviest, simplest, and most penetrating album of their career, Outta Sight. With no roadmap and an overall uncertainty hanging over the universe, the band circled up, plugged into their amps, shared riffs and melodies, and leaned on each other for inspiration. The guys say it was the least prepared they’ve been cutting a record since their self-titled album in 2012, but bassist Ryan Gullen calls the music they made a “life raft,” claiming that their initial sessions for Outta Sight saved them from their anxieties. “Playing rock music kept us grounded…kept us going.”
The Sheepdogs shared another piece of Outta Sight—out June 3rd via Warner Music—with album-track “So Far Gone,” a J.J. Cale-sounding slow burner recorded with a vintage Rhythm Ace drum machine and fuzzy, straight-into-console electric guitars. Keeping with a simple “get in the room and play the song” mentality, the band landed on most of the album’s final tracks within three or four takes, letting a vibe, rather than a concept, guide their hands.

The strength of The Sheepdogs in full throttle straight-up appeals to your senses. Without pretension, it’s urgent, rhythmic, clear, and fun; it’s a break from slick production and gazing at your navel and proclaims the joy and jubilation of drums, bass, horns, and electric guitar. The Sheepdogs make tunes that make you nod your head. The artistry, however, beneath the stadium riffs—the harmonies, the multiple guitar parts, the groove behind a rhythm section that hangs out together when they’re not on the clock—is battle-honed and spit-shined between vans, garages, thousands of soundchecks, and, yes, headlining shows.
“A no-bullshit approach, a workmanlike ability to put our heads down and play resulted in a real feeling and vibe on the record that I think is special,” says Currie. “It’s something that just might have saved us and the feeling on the album is us taking that negative pandemic energy and expressing it, transferring it, through non-bummer straight-ahead rock ‘n’ roll.” Outta Sight is the biggest, brightest, beer-swillingest, lighters lit in the cheap seats, smile-inducing COVID stadium rock record to emerge from the pandemic blues. It’s got humor, it’s got chops, and it’s performed and recorded by five brothers from Saskatoon, Saskatchewan who are grateful to get together and play for rock fans.
“Rock ‘n’ Roll is about cheering us up. Simple as that,” says Currie. “We hope our music does the same for the listeners at a time where things still can feel very tough. There’s no greater truth than rock ‘n’ roll.”