Grammy Award-winning blues legend Koko Taylor, 80, died on June 3, 2009 in her hometown of Chicago, IL, as a result of complications following her May 19 surgery to correct a gastrointestinal bleed. On May 7, 2009, the critically acclaimed Taylor, known worldwide as the “Queen of the Blues,” won her 29th Blues Music Award (for Traditional Female Blues Artist Of The Year), making her the recipient of more Blues Music Awards than any other artist. In 2004 she received the NEA National Heritage Fellowship Award, which is among the highest honors given to an American artist. Her most recent CD, 2007’s ‘Old School’, was nominated for a Grammy (eight of her nine Alligator albums were Grammy-nominated). She won a Grammy in 1984 for her guest appearance on the compilation album ‘Blues Explosion’ on Atlantic.

Born Cora Walton on a sharecropper’s farm just outside Memphis, TN, on September 28, 1928, Koko, nicknamed for her love of chocolate, fell in love with music at an early age. Inspired by gospel music and WDIA blues disc jockeys B.B. King and Rufus Thomas, Taylor began belting the blues with her five brothers and sisters, accompanying themselves on their homemade instruments. In 1952, Taylor and her soon-to-be-husband, the late Robert “Pops” Taylor, traveled to Chicago with nothing but, in Koko’s words, “thirty-five cents and a box of Ritz Crackers.”

In Chicago, “Pops” worked for a packing company, and Koko cleaned houses. Together they frequented the city’s blues clubs nightly. Encouraged by her husband, Koko began to sit in with the city’s top blues bands, and soon she was in demand as a guest artist. One evening in 1962 Koko was approached by arranger/composer Willie Dixon. Overwhelmed by Koko’s performance, Dixon landed Koko a Chess Records recording contract, where he produced her several singles, two albums and penned her million-selling 1965 hit “Wang Dang Doodle,” which would become Taylor’s signature song.

After Chess Records was sold, Taylor found a home with the Chicago’s Alligator Records in 1975 and released the Grammy-nominated ‘I Got What It Takes’. She recorded eight more albums for Alligator between 1978 and 2007, received seven more Grammy nominations and made numerous guest appearances on various albums and tribute recordings. Koko appeared in the films ‘Wild At Heart’, ‘Mercury Rising’ and ‘Blues Brothers 2000’. She performed on ‘Late Night With David Letterman’, ‘Late Night With Conan O’Brien’, CBS-TV’s ‘This Morning’, National Public Radio’s All Things Considered, CBS-TV’s Early Edition, and numerous regional television programs.

Over the course of her 40-plus-year career, Taylor received every award the blues world has to offer. On March 3, 1993, Chicago Mayor Richard M. Daley honored Taylor with a “Legend Of The Year” Award and declared “Koko Taylor Day” throughout Chicago. In 1997, she was inducted into the Blues Foundation’s Hall of Fame. A year later, Chicago Magazine named her “Chicagoan Of The Year” and, in 1999, Taylor received the Blues Foundation’s Lifetime Achievement Award. In 2009 Taylor performed in Washington, D.C. at The Kennedy Center Honors honoring Morgan Freeman.

Koko Taylor was one of very few women who found success in the male-dominated blues world. She took her music from the tiny clubs of Chicago’s South Side to concert halls and major festivals all over the world. She shared stages with every major blues star, including Muddy Waters, Howlin’ Wolf, B.B. King, Junior Wells and Buddy Guy as well as rock icons Robert Plant and Jimmy Page.

Taylor’s final performance was on May 7, 2009 in Memphis at the Blues Music Awards, where she sang “Wang Dang Doodle” after receiving her award for Traditional Blues Female Artist Of The Year. 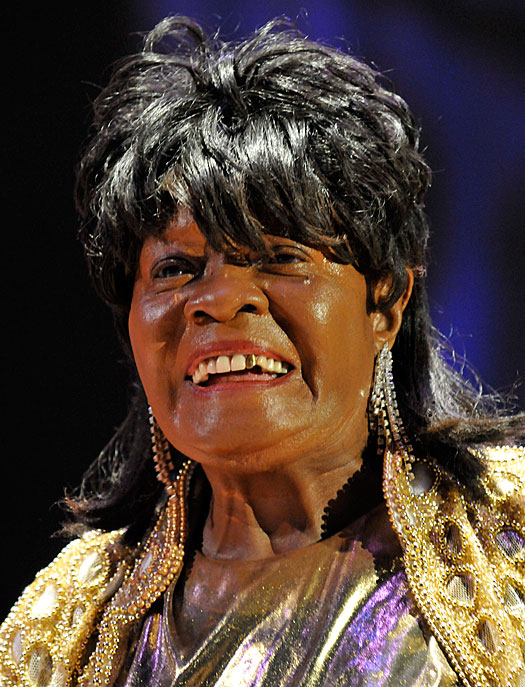 Koko Taylor is a national treasure…she packs firepower a lot of youngsters only wish they had.
– Chicago Tribune

Koko Taylor is the blues…a growling goddess of down-and-dirty. Sheer, unstoppable shouting power, full steam ahead and damn the torpedoes. There are many kings of the blues but only one queen. Koko’s voice is capable of pinning a listener to the back wall.
– Boston Globe