M for Mississippi: A Road Trip through the Birthplace of the Blues (DVD + CD) 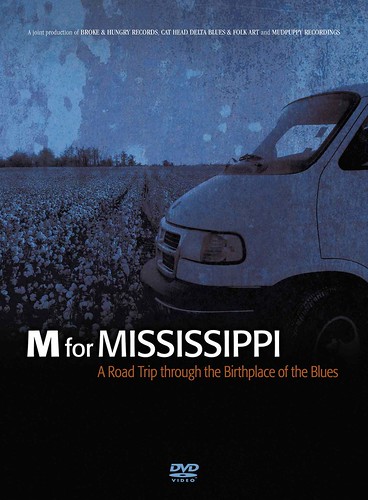 A hotly anticipated new film celebrating the raw, raucous spirit of Mississippi’s surviving blues scene had its worldwide premiere on Saturday, Oct. 11 at the Delta Cinema at #11 Third Street in downtown Clarksdale, Miss. The film, M for Mississippi: A Road Trip through the Birthplace of the Blues, follows blues producers – Roger Stolle of Cat Head Delta Blues & Folk Art and Jeff Konkel of Broke & Hungry Records – on a weeklong journey across Mississippi visiting a dozen of the state’s most fascinating blues figures in rustic environments ranging from juke joints to cotton fields.
“We planned this road-trip movie for two years,” said Stolle. “We avoided big concert stages and rock-star narrators in favor of intimate houseparties and rockin’ Delta juke joints. The results speak for themselves.”

M for Mississippi, which was filmed early this spring, is a co-production of Broke & Hungry Records, Cat Head Delta Blues & Folk Art and Mudpuppy Recordings. The motion picture follows Konkel and Stolle as they travel the dusty highways and byways of Mississippi, calling on such seminal blues figures as James “T-Model” Ford, Robert “Wolfman” Belfour, Terry “Harmonica” Bean, Wesley “Junebug” Jefferson, Jimmy “Duck” Holmes, Pat Thomas, L.C. Ulmer, Robert “Bilbo” Walker and more. Joining Stolle and Konkel on the journey were filmmaker Damien Blaylock and co-producer Kari Jones of Mudpuppy Recordings. Recording engineer Bill Abel followed in his weathered Volvo station wagon packed with recording equipment. Over the next week, the tiny caravan traversed the state of Mississippi visiting some of the state’s most original blues figures while the camera rolled.
The resulting film shines a long-overdue spotlight on these men, their music and the land from which the blues sprang. More than just a collection of concert performances, M for Mississippi collects the sounds, the images and the feel of both the performers and their native landscape – an environment essential to their livelihoods and inseparable from their art.
“We aimed to capture the essence of the Delta’s blues survivors and show why the blues simply had to come from a place like Mississippi,” explained Konkel.
The film has been released on DVD this fall along with a companion CD soundtrack. Orders are being accepted through the film’s official Web site at www.mformississippi.com. The DVD’s bonus features include deleted/extended scenes, closed captioning, behind the scenes footage and more. 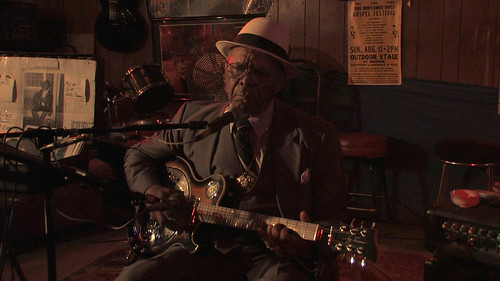 This timely road movie will explore the thriving underbelly of a dying American art form in the land where it began – Mississippi.

Planned as a weeklong journey through the birthplace of the blues, M for Mississippi seeks to capture the proverbial “real deal” in its home where it is most comfortable and authentic – the jukes, the front yards, the cotton fields. More than just a collection of concert performances, the film will collect the sounds, the images and the feel of both the performers and their native landscape – an environment essential to their livelihoods and inseparable from their art.

Cultivating the fertile ground between such landmark theatrical travelogues as Buena Vista Social Club and Deep Blues, M for Mississippi aims to appeal to more than just the average blues fan. By showcasing such a fascinating foreign land so close to home, the filmmakers hope to inspire countless others to make their own road trips down Mississippi’s blue highways.