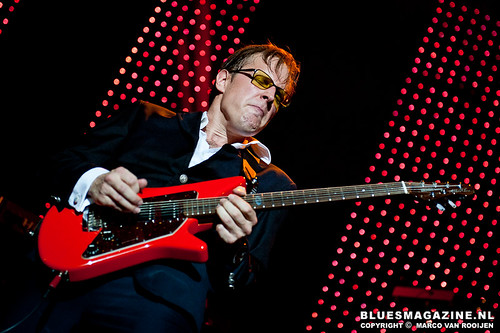 On Dust Bowl, my mission statement was to re-establish myself as a solo artist. I wanted to make a rootsy blues record and remind people that I’m not from England or Greece, which some fans may think. Getting some earthy grit on the tracks was important, but at the same time, I wanted to make a blues album that was different. Basically, I didn’t want to compete with myself. “If you listen to my last few albums, you hear a progression. Last year, though, I did an about-face and made a big rock record with Black Country Communion. Obviously, I knew I shouldn’t try to out-rock that!

[laughs] But I didn’t want to repeat what I had already done solo-wise. So I had to look for new places creatively…mentally, spiritually. It was challenging. “A few people have remarked to me that Dust Bowl sounds more ‘mature,’ and I thought, Well, I made my last record a year ago… I’m not that much older!

The UK’s premiere classic rock radio station “Planet Rock” will air an hour-long radio special about Joe Bonamassa’s upcoming album “Dust Bowl” on Saturday March 19th at 7pm GMT. The show will include interviews with Joe Bonamassa and record producer Kevin Shirley about the making of the album. The radio exclusive will dovetail the worldwide release of Bonamassa’s 12th solo album, released in the U.K. on Monday March 21st, followed by North American release on Tuesday March 22nd.

Online listeners worldwide can listen live to the radio special via the official Planet Rock website www.planetrock.com. For those people who miss the original transmission, will be able to play the interview back from the website by clicking on the on-demand button on the home page of the Planet Rock website from 8:30pm GMT, 30 minutes after the show has aired. Listeners will also be able to access the Planet Rock radio special on digital radio, Sky 0110, Virgin 924, and Freesat 730.

Bonamassa, a guitar prodigy at 12, started playing with blues legend B.B. King. Since then he has toured with numerous artists including Foreigner, Robert Cray and Stephen Stills to name but a few. In May 2009, he played London’s Royal Albert Hall where he was joined onstage by Eric Clapton. Since then he has released a solo album ‘Black Rock’ and formed the Anglo/American classic rock band Black Country Communion with Glenn Hughes, Jason Bonham and Derek Sherinian. Joe also won ‘Best Live Act’ of 2010 in the Planet Rock end of year listener poll.