ELECTRIFIED / CHEAT YOU FAIR – THE STORY OF MAXWELL STREET (DVD)

ELECTRIFIED / CHEAT YOU FAIR – THE STORY OF MAXWELL STREET

THE FINAL HISTORY CAUGHT ON DVD

Chicago’s Maxwell Street was one of America’s great outdoor markets. People from every nationality assembled freely in this 14 square block area in the heart of the ghetto, “the Ellis Island of the Midwest.” It was a safe place, a refuge for the poor and downtrodden where you could always find a bargain. It was where the American hot-dog was born.

Maxwell Street was also “the New Orleans of the North,” where partnerships between blacks and Jews spawned the earliest recording studios and launched both the modern blues and the earliest rock and roll.

In 1994, Maxwell Street, the birthplace of the modern blues, was lost to urban renewal and campus expansion by the City of Chicago and the University of Illinois/Chicago.

For more information about this fantastic, on of a kind documentary visit:
www.electrifiedthemovie.com / www.cheatyoufairthemovie.com 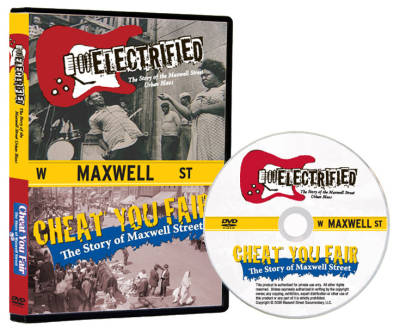 Electrified: The Story of the Maxwell Street Urban Blues tells the definitive history of the Chicago blues. Written, directed and produced by Phil Ranstrom and narrated by actor Joe Mantegna, the film chronicles how the urban neighborhood of Maxwell Street created a unique environment of commerce and cooperation that led first to the hard-driving sound of the urban blues, and ultimately to rock and roll.
Interviews with many of the legendary bluesmen who “studied at Chicago’s Maxwell Street school of music,” including Buddy Guy, Junior Wells, Charlie Musselwhite, Jimmie Lee Robinson and the “father of rock and roll” Bo Diddley, complement the film’s historical narrative and create an exceptional history of this important era in American music.
The world premiere screening of the film in January 2008 during the Sundance Film Festival featured a live performance by acclaimed blues guitarist Kenny Wayne Shepherd and blues legend Hubert Sumlin.

Cheat You Fair: The Story of Maxwell Street documents the last days of the historic Maxwell Street market. One of the largest, best known open air markets in the world, with more than 20,000 visitors per day, the home of the hotdog and the Chicago landmark that saw the birth of both the urban blues and rock-and-roll, the original Maxwell Street was the victim of urban gentrification in the 1990s.
The film premiered to critical acclaim at the Chicago International Documentary Film Festival in April 2007, and was recently shown at the Amnesty International venue at Sundance from January 18-20 and the Gene Siskel Film Center in Chicago on February 2.
Says Ranstrom: “Maxwell Street’s demise had to be investigated and told. While the gentrification of an historic neighborhood is not altogether unique, it is instructive for audiences to see how the forces come about to bring down such a vital and interesting area as well as the price we pay as a society when we lose places like Maxwell Street.”

You can order this DVD in The Netherlands via www.bluesdvd.nl