‘Already Free’ was self-produced by Derek at his new home studio in Jacksonville. In addition to the core members of the dTb, the album offers collaborations with a close circle of family and friends including Doyle Bramhall II, Oteil Burbridge, Susan Tedeschi, Duane Trucks and more. The album came to life organically in Derek’s backyard as friends stopped by to write and rehearse in the new studio. Derek explained in a recent interview:
“When we went in the studio originally it was just to write and kind of get comfortable in the space. It wasn’t to do a record, so there was no pressure. There were some times when everybody would go out to dinner and I would stay behind. If I got an idea, I would run into the control room, hit ‘play,’ then run out into the recording room and set up a mic. You’d hear this thing banging around and then this guitar part comes in. A lot of the album was completely done by the seat of our pants, and a lot of the sounds we got, it was just so in the moment.”

Original material makes up a major part of this record, largely due to a luxury Derek isn’t used to: time off. His hectic schedule finally opened a window for Derek to write at home with band mates and friends. “Everyday I would get up, and me or Susan would drive our two kids to school,” Derek says. “I’d come back, have some coffee and then head to the studio and start messing around with a guitar and hope a song idea appeared. Somehow without fail, there was at least a song written every day, or some great cover idea that came to us and we recorded it. So there was a good three or four-week period where every day we were writing and recording a song. That was different for me.”

In addition to the wealth of original material on Already Free there are some choice cover songs interpreted and revived as only the dTb can do, including the single being released in November. “Down in the Flood,” from Bob Dylan and the Band’s Basement Tapes, is a tune that may have more portent now than when Dylan wrote it in 1967. “That was one that was kind of an afterthought,” admits Derek. “We just went in and tracked it. I think it really turned out to be one of the most powerful songs on the album. Lyrically, it’s pretty timely. Crash on the levee, down in the flood, are significant post-Katrina. They are good metaphors, as there are in most Dylan tunes.” 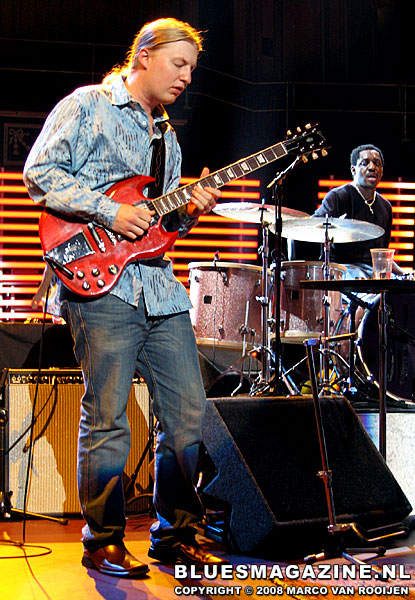