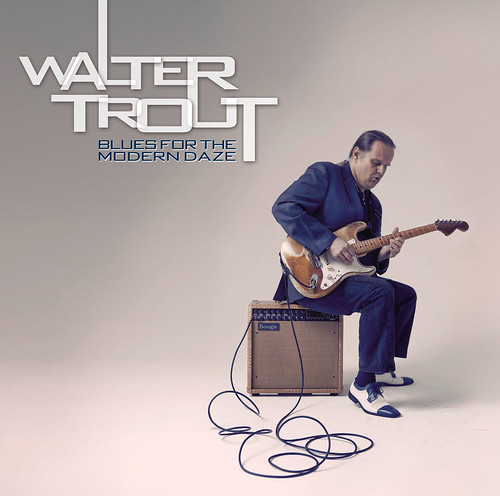 Walter Trout’s passionate new Blues for the Modern Daze cuts right to the core of his art and his heart. His 21st album returns the contemporary guitar legend to his hard-core blues roots and finds his songwriting at a creative and personal zenith. On tour in March!

Walter Trout’s 21st album Blues for the Modern Daze will be released in Europe on Monday 23rd April (24th April in the US). The new album showcases the contemporary guitar legend’s return to his hardcore blues roots, with songwriting at a creative and personal zenith. Blues For The Modern Daze is Trout’s sixth recording for Provogue Records, a division of the Mascot Label Group, and his first full-fledged blues album in 23 years as a bandleader.

The real turning point for Trout was his tenure with British blues giant John Mayall. Trout became part of the Bluesbreakers’ lineage of great guitarists along with Eric Clapton, Peter Green and Mick Taylor.

Beginning in 1984 he shared six-string duties with Coco Montoya in Mayall’s band, creating a flexible guitar dynamic that helped provide the Bluesbreakers a renaissance that returned the group to the apex of the international blues touring circuit.

Trout began leading his own group in 1989 and cut his debut album Life In the Jungle, and rapidly became a star in Europe. His first US release, 1998’s critically heralded Walter Trout, made him a permanent fixture of the American blues-rock scene that he is today.

Trout’s travels over the past 39 years, and his wide appreciation of his predecessors, yield a significant influence on his new album Blues For The Modern Daze.

“My main inspiration for this album,” says Trout, “was the country bluesman Blind Willie Johnson, an early blues innovator who recorded such timeless gospel informed blues numbers as Soul of a Man and Nobody’s Fault But Mine. His music is beautiful, primal, direct and deeply spiritual. I wanted to feel it at my back when we were cutting these songs.”

Continues Trout, “The new album explores a side of my music that’s rooted in my first musical love, and it reveals something about me, too. It sums up the thoughts and attitudes of somebody who is getting a little older and is feeling like he’s a part of another era, with different values and a different perspective on life that’s prevalent today. I stand behind compassion, authenticity and honesty, as strongly as I stand behind my music.”

Blues for the Modern Daze was recorded at Entourage Studios in North Hollywood, California, with Trout and engineer Eric Corne producing. It’s the fifth time Trout has collaborated with Corne, who contributed to the arrangements and sonic palette of the songs that Trout wrote and demoed on acoustic guitar during the year before the sessions.