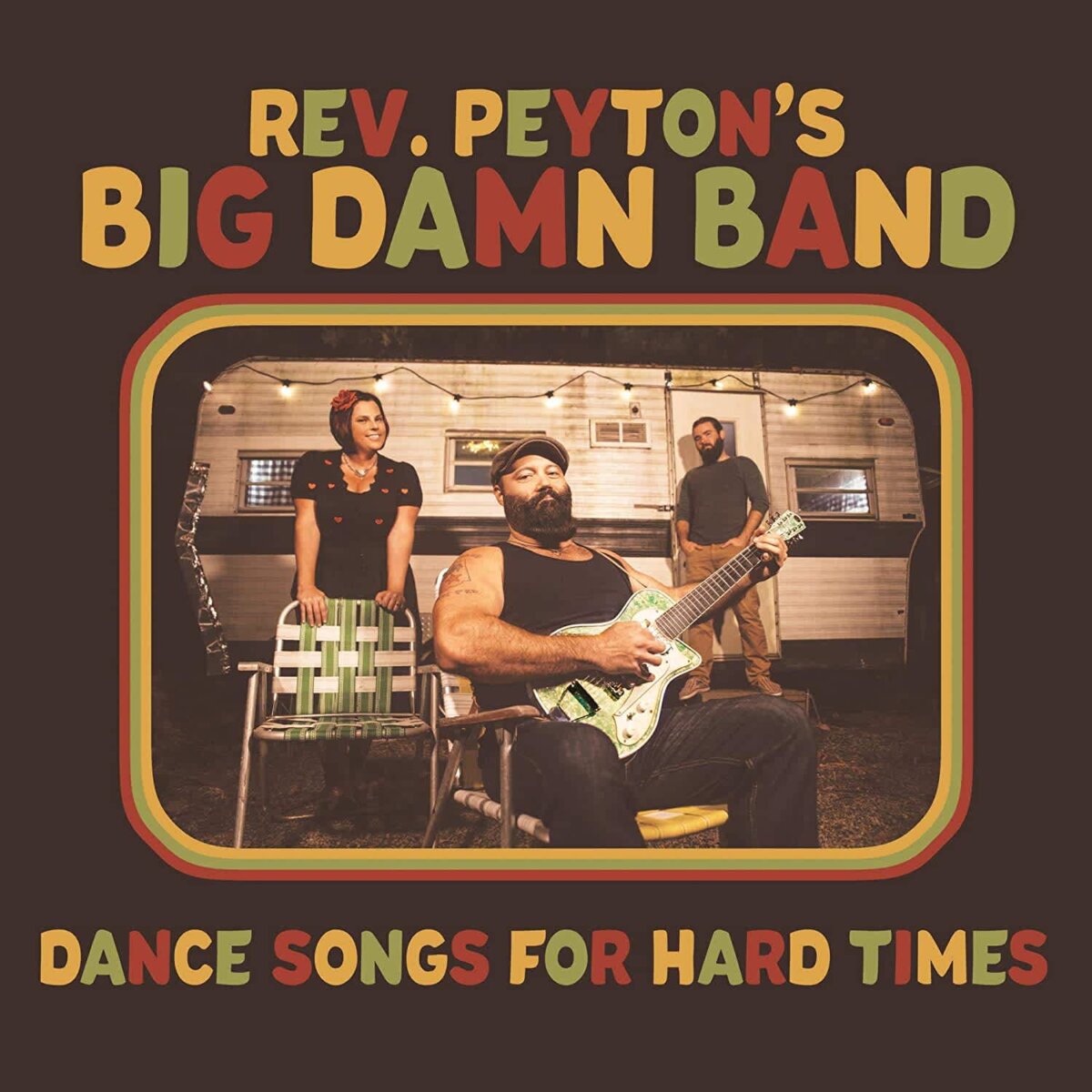 The Reverend Peyton’s Big Damn Band are the greatest front-porch blues band in the world. They are led by Reverend Peyton, who most consider to be the premier finger picker playing today. He has earned a reputation as both a singularly compelling performer and a persuasive evangelist for the rootsy, country blues styles that captured his imagination early in life and inspired him and his band to make pilgrimages to Clarksdale, Mississippi to study under such blues masters as T-Model Ford, Robert Belfour and David “Honeyboy” Edwards. The band has built through their legendary live shows. Playing as many as 300 shows each year, the band has one of the most dedicated followings out there. This following is sure to eat up the band’s latest offering, Dance Songs For Hard Times, a country blues record that was made the right way — two feet on the ground and both hands getting dirty.

The new album from Reverend Peyton’s Big Damn Band was written by candlelight and then recorded using the best technology available . . . in the 1950s.

But listeners won’t find another album as relevant, electrifying and timely as Dance Songs for Hard Times.

Scheduled for independent release April 9, 2021 via Thirty Tigers, Dance Songs for Hard Times conveys the hopes and fears of pandemic living. Rev. Peyton, the Big Damn Band’s vocalist and world-class fingerstyle guitarist, details bleak financial challenges on the songs “Ways and Means” and “Dirty Hustlin’.” He pines for in-person reunions with loved ones on “No Tellin’ When,” and he pleads for celestial relief on the album-closing “Come Down Angels.”

Far from a depressing listen, Dance Songs lives up to its name by delivering action-packed riffs and rhythms across 11 songs. The country blues trio that won over crowds on more than one Warped Tour knows how to make an audience move.

“I like songs that sound happy but are actually very sad,” Peyton says. “I don’t know why it is, but I just do.”

Of course, the greatest front-porch blues band in the world found itself sidelined from a relentless touring schedule because of the coronavirus pandemic. Peyton says he was surprised when his mind and soul unleashed a batch of new songs in March and April of 2020.

“I think it was the stress of everything,” he says. “At the time, we were watching everything we know crash down. I didn’t know what was going to happen with our career, with our house, with food, with anything.”

Peyton wasn’t alone in uncertainty. It’s a feeling that gripped the world. Added to Peyton’s concerns were a lingering illness — perhaps undiagnosed COVID-19 — affecting “Washboard” Breezy Peyton, his wife and Big Damn Band member, as well as a cancer diagnosis for his father. A metaphorical wallop arrived when unpredictable weather in the rustic wilds of Southern Indiana knocked out power at the Peytons’ 150-year-old log cabin. For multiple days.

While Breezy rested and recovered, Peyton crafted songs in near darkness.

“It’s been a struggle the entire time,” he says. “Nothing’s been easy. Other than the music. The music came easy.”

“Too Cool to Dance” might be interpreted as the album’s centerpiece for its message of not taking things for granted. The seize-the-moment anthem offers the chorus, “We may not get another chance. Oh, please don’t tell me you’re too cool to dance.”

“I was thinking about all the times where I’ve been somewhere and felt too cool to dance,” Peyton says. “I didn’t want to be that way. Not being able to do anything last year, I had this feeling of, ‘Man, I’m not going to waste any moment like this in my life — ever.’ ”

Peyton, the cover subject of Vintage Guitar magazine’s January 2020 issue, showcases his remarkable picking techniques on “Too Cool to Dance.” It’s rare to hear a fingerstyle player attack Chuck Berry-inspired licks with index, middle and ring fingers while devoting his or her thumb to a bass line. Yet the multi-tasking Peyton has made an art of giving the illusion he’s being accompanied by a bass player, despite the Big Damn Band’s roster featuring no one beyond himself, Breezy on washboard and Max Senteney on drums.

“Too Cool to Dance” heats up thanks to Peyton’s 1954 Supro Dual Tone electric guitar. Once known exclusively for playing acoustic guitar in the country-blues tradition of Mississippi icons Charley Patton and Bukka White, Peyton has seemingly migrated north and plugged in with Chicago giants Howlin’ Wolf and Muddy Waters.

“It’s crazy,” Peyton says of “Too Cool to Dance.” “It almost feels like a song from the 1950s that’s been lost. At the end of the day, it still somehow feels like us.”

To document the livewire immediacy of Dance Songs for Hard Times, the Big Damn Band — including a healthy Breezy — made a pandemic road trip to Nashville to record with producer Vance Powell (four-time Grammy Award winner whose resume includes work with Chris Stapleton and Jack White).

Peyton embraced Powell’s suggestion to turn back the clock and record no more than eight tracks of audio to analog tape. Minimal overdubs are heard on Dance Songs for Hard Times, and Peyton sang while playing guitar live in the studio.

“Vance likes the gear that I like,” Peyton says. “And he has a bunch of cool gear I would only have in my wildest dreams.”

Visually, Dance Songs for Hard Times is led by a video to accompany the song “Ways and Means.” Defined by pastel colors and confident dance moves, the video was made at an old-school laundromat to match the song’s Bo Diddley-boasting on a limited budget: “My knife is sharp, my guitar never flat … king of the laundromat.”

“The song ‘Ways and Means’ was written for all those folks who have the moves, the style, the substance, the talent, but maybe not the seed money or the famous last name,” Peyton says. “All those people who had to work extra hard because they didn’t get to start way ahead. Folks who have been playing catch-up since they were born and had to get really good just to make it to zero.”

As 2020 progressed, Peyton’s father was declared free of cancer following surgery. A new Patreon page (http://www.Patreon.com/bigdamnband) helped the band connect with fans and make up some lost wages.

And Big Damn Band supporters around the world check in monthly for pay-what-you-can livestream performances that originate at the Peytons’ log cabin.

Conditions aren’t ideal when compared to pre-pandemic adventures that allowed the Big Damn Band to play for audiences in nearly 40 countries. But those days will return, and in the meantime we have Dance Songs for Hard Times.

“Despite the hardships of this moment in history, it created this music that I hope will maybe help some people through it,” Peyton says. “Because it helps me through it to play it.” 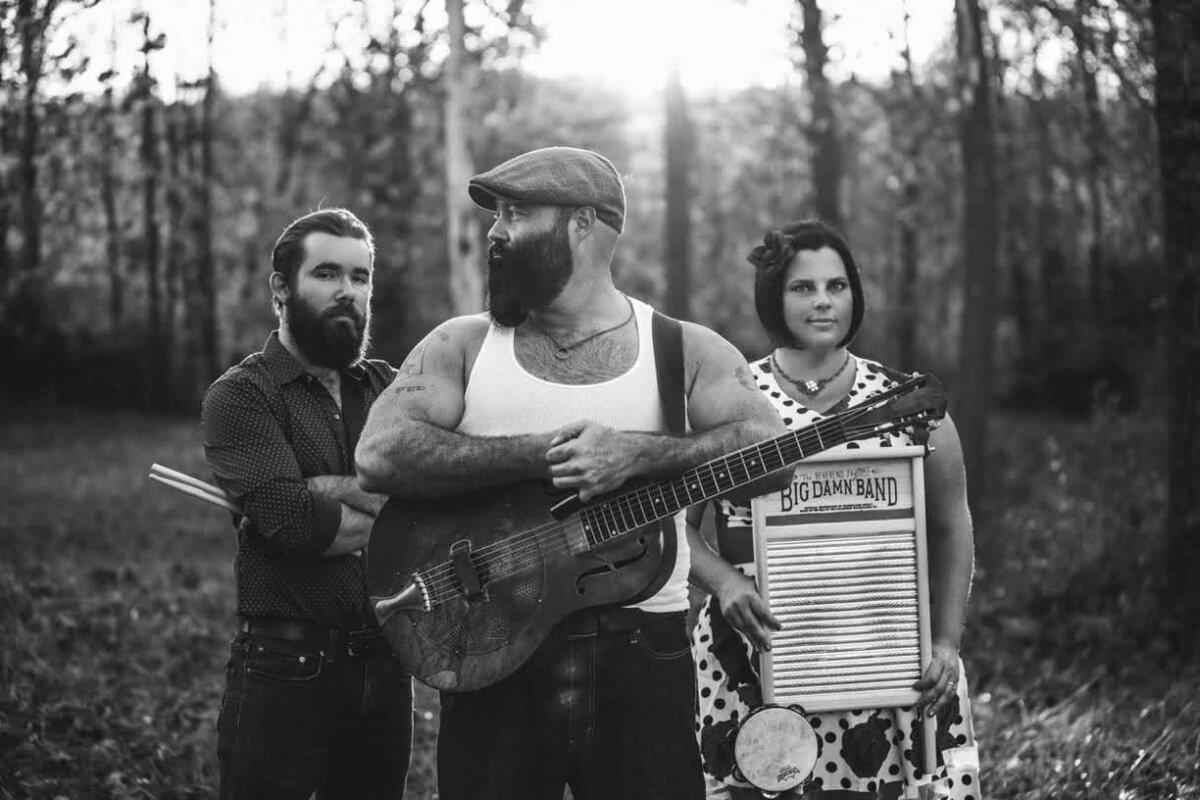