The career of American bluesman, roots radical, and pioneer of world music Taj Mahal is set to be celebrated next year with the release of TAJ MAHAL – THE COMPLETE COLUMBIA ALBUMS COLLECTION.  This deluxe box set will include all ten of the two-time Grammy Award®-winning artist’s original Columbia albums, plus one movie soundtrack and the two previously-unreleased albums which comprised last year’s The Hidden Treasures Of Taj Mahal: 1969-1973 package.   Fifteen CDs in all, covering 170 tracks.  The box will be available everywhere February 5, 2013, through Columbia Legacy, a division of SONY MUSIC ENTERTAINMENT.

As with previous volumes in Legacy’s Complete Album Collections series, each of the discs in THE COMPLETE COLUMBIA ALBUMS COLLECTION is packaged in a replica mini-LP sleeve reproducing that LP’s original front and back cover artwork.  The accompanying booklet includes complete discographical information for each album, along with a liner notes essay written by blues and jazz and roots music commentator Miles Mellough.

The release of THE COMPLETE COLUMBIA ALBUMS COLLECTION coincides with Black History Month in February 2013.  The release also finds the perennial road warrior, who celebrated his 70th birthday on May 17, 2012, in the midst of a busy tour schedule.  Among his most recent gigs, he could be found aboard the Holland America Line’s MS Nieuw Amsterdam from January 20-27, for the all-star “Legendary Rhythm & Blues Cruise,” featuring Dion, Mavis Staples, Elvin Bishop with Mickey Thomas, Big Head Todd & The Monsters, Tab Benoit, Rod Piazza & The Mighty Flyers, and dozens more.

Taj Mahal is nothing less than a force of nature whose global sensibility is without precedent or peer.  He was not “ahead of his time” but rather of his time, an embodiment of the awakening world collective consciousness that has run from Selma and the first Be-In in San Francisco, all the way to Tahir Square and Occupy Wall Street.  This is affirmed by David Rubinson, the former Columbia Records staff producer who produced Taj’s first five albums.

“It has been my enormous fortune to have known, admired, enjoyed, revered, loved and survived with, my great friend Taj Mahal for damn near fifty years” says Rubinson.  “As this amazing collection illustrates, he was one of the very first to embody and make manifest a truly universal global humanism, a world without borders, risen from a deep inquiry and understanding and love of human beings in all their shapes and forms and shades and sounds.  Taj Mahal is not a curator or archeologist, but the unique summation of a vast repository of human, African, and African-American experience.  His uniqueness is matched by his universality.”

Taj Mahal’s life and times are well documented.  Growing up in a musical family of South Carolina and West Indian heritage in Massachusetts, he fell under the folk and blues spell of the burgeoning Cambridge coffee house scene in the late 1950s and early ’60s.  His first lesson in guitar came from childhood neighbors from North Carolina.  After graduating from U-Mass at Amherst, he headed west to pursue music.  He was 23 years old when he recorded his first tentative album for Columbia Records in 1965, material which remained unissued for more than 25 years.  By 1967, however, working with Columbia staff producer David Rubinson, his official self-titled debut LP was completed and released early the following year.

The Natch’l Blues found Taj Mahal expanding his base and staking out the first soundings on his own turf.  In addition to tributes to Otis Redding (“You Don’t Miss Your Water”) and Estes’ long-time partner Yank Rachell (“She Caught the Katy and Left Me a Mule To Ride”), the album featured three originals by Taj (“I Ain’t Gonna Let Nobody Steal My Jellyroll,” “Going To Move Up To the Country, Paint My Mailbox Blue,” “Done Changed My Way Of Living”), and a couple of arrangements of traditional folk-blues (“Corinna,” “The Cuckoo”).   When the album was reissued on CD in 2000, it included an alternate version of “The Cuckoo” and two songs that don’t appear anywhere else in the Taj Mahal discography, “New Stranger Blues” and “Things Are Gonna Work Out Fine.”  The expanded edition tracklist is included in this box set.

Bursting with musical ideas, the next project with Rubinson was the ambitious double-LP of 1969, Giant Step/De Ole Folks at Home.  A collection of nearly two dozen songs, it was Taj Mahal’s  first entry into the top 100 of the Billboard albums chart and stayed in print in the Columbia catalog for two decades.  Meanwhile, over the course of the next two years the band morphed, as Ry Cooder and Jesse Ed Davis began solo recording careers.  Taj Mahal established a partnership with jazz tuba virtuoso Howard Johnson (who became a cornerstone of his band) that was introduced on another double-LP, The Real Thing, recorded live at the Fillmore East in February 1971.

The Real Thingreprised many familiar numbers and audience favorites (“Fishin’ Blues,” “Ain’t Gwine To Whistle Dixie (Any Mo’),” “Going Up To the Country, Paint My Mailbox Blue,” “Diving Duck Blues”), some of them in extended versions that gave Johnson’s brass section plenty of room to stretch out.  It also included enough new material to keep the program lively (“Sweet Mama Janisse,” “Big Kneed Gal,” Blind Willie Johnson’s “You’re Gonna Need Somebody On Your Bond,” “Tom and Sally Drake,” “John, Ain’t It Hard”).  The penultimate jam occupied one full LP side, the 19-minute “You Ain’t No Street Walker Mama, Honey But I Do Love the Way You Strut Your Stuff” (edited to 11:45 on CD).  The 2000 reissue reinstated “She Caught the Katy and Left Me a Mule To Ride,” which had been shelved due to time limitations of the double-LP, and that expanded edition is contained in this box set.

Taj Mahal’s career blossomed over the next five years as his musical scope grew to encompass the blues of Chicago, Memphis and Detroit, and the rhythms of Jamaica and the West Indies.  He began to produce his own albums for Columbia in 1972, and recorded the soundtrack to 20th Century-Fox’s Sounder that same year.  He parted ways with Columbia in 1976 and moved on to Warner Bros., Gramavision, Private Music, Hannibal, Rhino Kids, and Music Maker, to name a few, recording countless fascinating album projects and collaborations along the way.

“In hindsight,” Mellough sums up, “we now know that Taj Mahal indeed was, and still is the real thing.  More so, we also realize that he was a man very much ahead of his time, employing the entire spectrum of blue.  Taj utilized indigo shades from all of the mighty river’s feeders, deftly incorporating them into that voice he was so steadfastly sculpting back in those early years.  Today, some four decades later, we should count our lucky stars that someone like Taj Mahal had the foresight, the degree of interest, and the love for the blues to dip his toes into the music’s many streams and help keep them alive and flowing.” 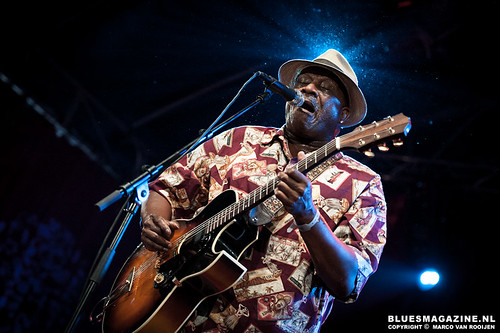 Taj Mahal And Ry Cooder – Get On Board