Son House – Forever On My Mind

Forever On My Mind was recorded in the fall of 1964 (ahead of 1965 “rediscovery” album) and never released.
Features first-time-on-record title track “Forever On My Mind,” plus never-heard recordings of “Death Letter” and “Preachin’ Blues” 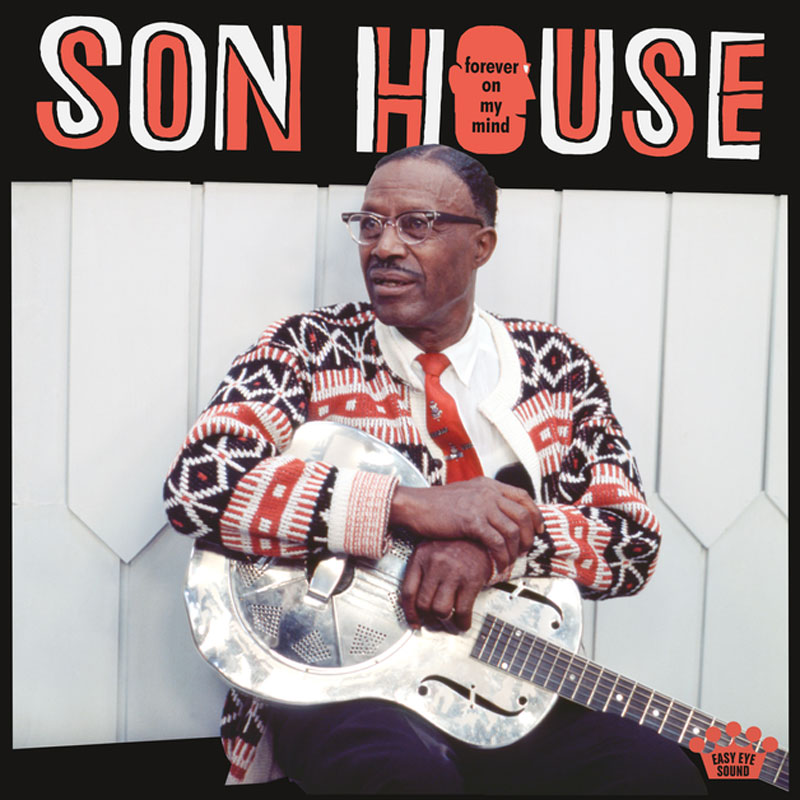 Son House
Forever On My Mind

On the evening of June 23, 1964, a red Volkswagen Beetle bearing three blues enthusiasts arrived in Rochester, N.Y. The young men were following a trail of clues in their search of a legend, and they found him sitting on the steps of an apartment building at 61 Greig Street.

“This is him,” Son House said.

Born Eddie James House, Jr. in Lyon, Mississippi in 1902, Son House at that time had not played music for more than two decades. But the re-release of his early work — commercial 78s issued by Paramount Records in 1930 and two field recordings by Alan Lomax for the Library of Congress in 1941-42 — by Origin Jazz Library and Folkways Records had excited fresh interest in a growing community of blues aficionados.

Within months of his rediscovery by Dick Waterman (who became House’s manager and handler), Nick Perls and Phil Spiro, the once-obscure 62-year-old musician was thrust into the public eye by a story in Newsweek magazine and a series of performances at folk music festivals and college campuses around the country.

Forever On My Mind, the new album of previously unreleased Son House recordings from Easy Eye Sound, the independent label operated by Dan Auerbach of The Black Keys, is the premiere release from Waterman’s personal cache of ’60s recordings by some of the titans of Delta blues. His collection of quarter-inch tapes — which are being restored to remarkable clarity by Easy Eye Sound — have gone unreleased until now. The collection is due out March 18, 2022.

Waterman says, “I always knew that I wanted this body of tape that I had to come out together, as The Avalon Collection or The Waterman Tapes, as sort of my legacy. They were just here at my home, on a shelf. I had made a few entrees to record companies, but nothing had really come through. I thought that Dan Auerbach would treat the material with reverence and respect.”

Auerbach says, “Easy Eye Sound makes blues records, and not many people make blues records anymore. This record continues where we started off, with our artists Leo Bud Welch and Jimmy ‘Duck’ Holmes and Robert Finley. It also is part of my history — some of the first blues music I heard was Son House. I was raised on his Columbia LP, Father of Folk Blues. My dad had that album and would play it in the house when I was a kid, so I know all those songs by heart.”

Forever On My Mind is the earliest issued full-length House solo performance recorded after his rediscovery, at an appearance captured on November 23, 1964 at Wabash College, a small men’s school in Crawfordsville, Indiana. In terms of power and intensity, it rivals, and in some cases surpasses, the Columbia album, cut five months later in a New York City studio. It also reflects a sharp musical focus that diminished in House’s later concert appearances and recordings.

“As he toured in ’65 and ’66 and ’67,” Waterman notes, “he developed stories — they were self-deprecating stories, with humor and things like that. So, he became sort of an entertainer. But these first shows in ’64 were the plain, naked, raw Son House. This was just the man and his performance. He didn’t have any stories or anything to go with it.”

In the wake of his rediscovery in Rochester, House — who had labored as a foundry worker, railroad porter and cook, among other jobs, after moving from Mississippi to New York in 1943 — decided to make a return to music at the urging of his enthusiastic young fans. Waterman explains, “He had been living in a [retirement] home with his wife, and they weren’t doing anything but living on Social Security. So, it was the opportunity to make some money that put us out on tour.”

House was outfitted with a new steel-bodied National resonator guitar, the instrument he had played on his early recordings, and Alan Wilson, later famous as the guitarist and singer of the Los Angeles blues-rock band Canned Heat, gave the sexagenarian musician a refresher course in his own music.

House, who to date had only performed before Black audiences in Southern juke houses, would now be introduced to a young and entirely new group of listeners. Waterman says, “He hadn’t played in front of white people at all.”

After some initial appearances that summer at the Unicorn coffeehouse in Cambridge, Mass., then a center of the American folk music renaissance of the ’60s, and an August 1964 set at the Philadelphia Folk Festival, House and Waterman set off on a modest tour of Midwestern campuses in November in the manager’s new Ford Mustang.

The manager recalls, “I wrote letters to [university] student activities committees, one after the other after the other. So we went out, and the first date, I remember, was at Antioch in Yellow Springs, Ohio, and then Wabash was one of the first ones after that.”

The college engagements included Oberlin College in Ohio, Shimer College in Mt. Carroll, Illinois, and the University of Chicago, where local blues fan Norman Dayron recorded at least part of the November 21, 1964, show; a single track later surfaced on the 1980 Takoma Records LP Rare Blues. But the Wabash College appearance two days later was caught on tape in full.

“Wabash did the taping, and then they later gave me the reel-to-reel tape,” Waterman remembers. “The show was held in kind of an assembly hall. There were a few dozen [in the audience] — there may have been up to 50 people, something like that. They were quiet and polite during the performance … There were no barriers, there were no filters between him and the audience. He was just giving them the plain, unvarnished Delta material, as he knew it and as he sang it.”

Five of the eight songs heard on Forever On My Mind were later released in studio versions on House’s Columbia LP. Another two songs that he played at Wabash College, renditions of his Delta contemporary Charley Patton’s “Pony Blues” and the gospel blues standard “Motherless Children,” were recorded by the label but went unreleased until 1992.

The first number heard on the Easy Eye Sound release, the titular “Forever On My Mind,” was never attempted in a recording studio, but it would be essayed from time to time in House’s concert performances; there is film footage of him playing it at the 1966 Newport Folk Festival. On the present album, the song, which contains snatches of his friend Willie Brown’s classic “Future Blues” and his own “Louise McGhee,” serves as a living lesson in the improvisatory Delta blues tradition.

“There are certain songs that he would play, go into an open G tuning,” Waterman says, “and just play things in a certain meter. And some of these songs borrowed verses from each other.”

House’s 1964-65 live appearances and his Columbia album placed him in the pantheon of such other great, recently rediscovered Delta blues musicians as Skip James, Mississippi John Hurt, Bukka White, and Rev. Robert Wilkins. Forever On My Mind now re-introduces House at the height of his renewed powers in an essential, previously unheard document of unique force and sonic clarity.

Says Auerbach, “He sounds like he’s in a trance, and his singing is so nuanced here. He’s very playful with his phrasing, just right on the money with his singing and playing. It sounds so right to me — top form Son House.”

For more information on House and his music, see Preachin’ the Blues: The Life and Times of Son House by Daniel Beaumont (Oxford University Press).