Seasick Steve to release album ‘Man From Another Time’, October 2009 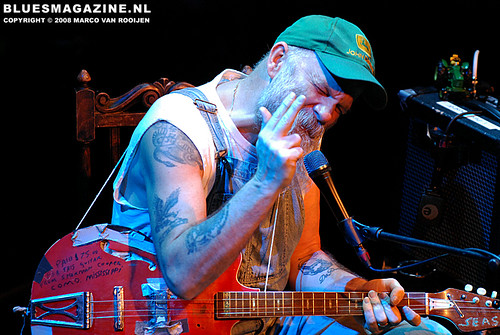 Produced, written, recorded and engineered by Seasick Steve (with the assistance of engineer Roy Williams), ‘Man From Another Time’ is a resolutely organic album that eschews modern studio trickery in favour of the warm style of ‘live’ analogue recording. Everything on the album was performed by Seasick Steve, aside from drums which are credited to his longstanding Swedish sticksman Dan Magnusson.

Seasick Steve utilised a variety of favourite guitars on the album including a one-string Didley-bo (a 2×4 with a string nailed to it), a guitar made out of an old cigar box (with four strings), his famous 3-string Trance Wonder guitar and an old beat-up acoustic guitar. His array of guitars were complimented by a tattered Fifties Fender Tweed Deluxe amp, old Forties ribbon mics and other weird and wonderful vintage microphones. The natural sounds and echoes of the recording rooms were used for reverb and any delays were done with tape. This is a down-in-the-dirt record. Feast your ears!

“I hope by making records like this, that it’ll make people want to hear music that’s recorded without the use of digital equipment, and that people’s ears can get a little rest from all that shit,” commented Seasick. “But if not, at least it was nice for me. Me and computers do not see eye to eye.”

‘Man From Another Time’ was mixed by Vance Powell at Nashville’s Blackbird Studios and mastered by Ray Staff at Air Studios, London.

Tracklisting ‘Man From Another Time’