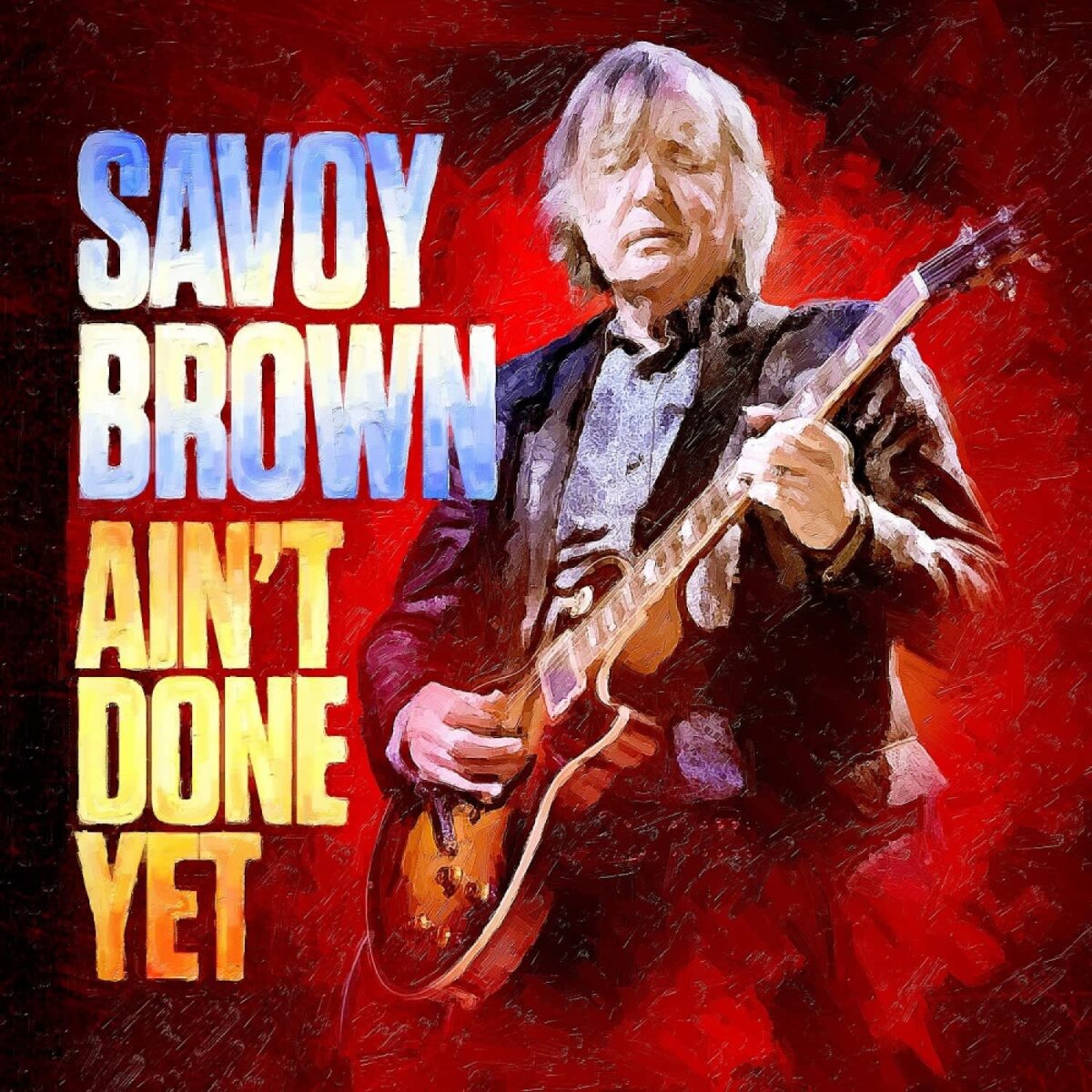 Legendary British Blues Rock band Savoy Brown, led by founding member Kim Simmonds, is releasing their exciting new album, Ain’t Done Yet, on Quarto Valley Records. The new album follows Savoy Brown’s critically acclaimed 2019 album, City Night. “The new album continues the approach I’ve been taking with the band this past decade,” says guitarist/singer/songwriter Kim Simmonds, who formed the band in 1965 in London, England, and is one of the longest running Blues Rock bands in existence. “The big difference with the new album is the multi-layer approach I took to recording the guitar parts. It’s all blues-based rock music. I try to find new and progressive ways to write and play the music I’ve loved since I was a young teenager.”

Simmonds has been the group’s guiding hand from the first singles released in 1966 through this newest effort, Savoy Brown’s 41st album release. On the new record, Simmonds (guitar harmonica, vocals) is joined by his long-running bandmates Pat DeSalvo (bass) and Garnet Grimm (drums). “Ain’t Done Yet” was recorded at Showplace Studios, Dover, New Jersey. I produced the album and worked closely with studio owner and engineer Ben Elliott. It’s a studio I’ve used many times before and it has a rich history of blues rock musicians recording there including Keith Richards, Eric Clapton and Leslie West.”.

“This is the sixth album I’ve made with Ben Elliott since the 1990’s, and on previous ones I’ve had various guests join me including Hubert Sumlin, Lonesome Dave Peverett and Duke Robillard,” continues Kim. “Shortly after making “Ain’t Done Yet,” Ben Elliot died. I have dedicated the new album to him. It will be the last album recorded at Showplace Studios.”

Energetic blues has been the calling card of the band from the beginning, but Simmonds infuses the 10 tracks on “Ain’t Done Yet” with a new spirit and vitality – plus some serious guitar chops – in a variety of styles and roots sounds that transcend the Blues Rock idiom. “I emphasized song content on the new album, and left room for band improvisation,” he admits. “For instance, there are two acoustic-based songs and also two six-minute songs where I’m able to stretch out on guitar solos.”

All Gone Wrong
I’ve always liked the lead off album song “All Gone Wrong” and it is one of my favorites on the album. The song is just my take on someone looking back at the past and that person feeling that life hasn’t quite worked out as expected. I used my Gibson Flying V for the solos.

Devil’s Highway
This song is about someone living a life (pick whatever aspect of life you imagine) and having to put up with all that goes with it. The good and the bad. I layered guitars using my Gibson 335.

River on the Rise
This is an acoustic based song and I play slide guitar as the lead instrument. I was thinking along George Harrison lines and how he played slide. Therefore, I used my Dean Tagliare guitar, which is a Stratocaster type instrument. It has single coil pick-ups along with humbucking pick-ups. It even sounds raga inspired to me.

Borrowed Time
About an older person looking around and feeling that the end of life isn’t that far away. Ben Elliott had an old “Multivox FullRotor” piece of equipment that I used to get the unique guitar tone. I felt the guitar needed a special character to add weight to the lyrics.

Feel Like A Gypsy
I’ve had this song in some form or other for years. My friend John Shelmet helps me sort out the songs I write – good, bad, and indifferent. He suggested this one and I am glad I took his advice. It took me awhile to find the right key and sort out the lyrics…what to keep and what not to keep. It is one of the songs where I do a long improvisation at the end.

Jaguar Car
I always like to play a boogie. It is part of the bands history and stems directly from the influence that John Lee Hooker had on me as a young teenager. This is a track I played harp on. The story is about a guy owning a Jaguar car and it being his reason to be. There is a sensual undertone to the
lyric.

Rocking In Louisiana
It is my nod to where the music I love was born. The story is about a person going to Louisiana to forget responsibilities and to simply have a good time. I used my steel dobro to give the song the traditional vibe and that acoustic feel runs under the whole track.

Soho Girl
I have had this song for years but was not happy with it. Originally, the song was recorded for an earlier album. My initial idea was to write about a London Soho girl but there is also a Soho neighborhood in New York City. Either way, it is about having an exotic girl as a girlfriend.

Crying Guitar
I’ve also had this instrumental in the vaults for ages and again John brought it to my attention. It has been a tradition of mine from the very first Savoy Brown album to feature an instrumental. This slow and moody one was perfect as an album closer.