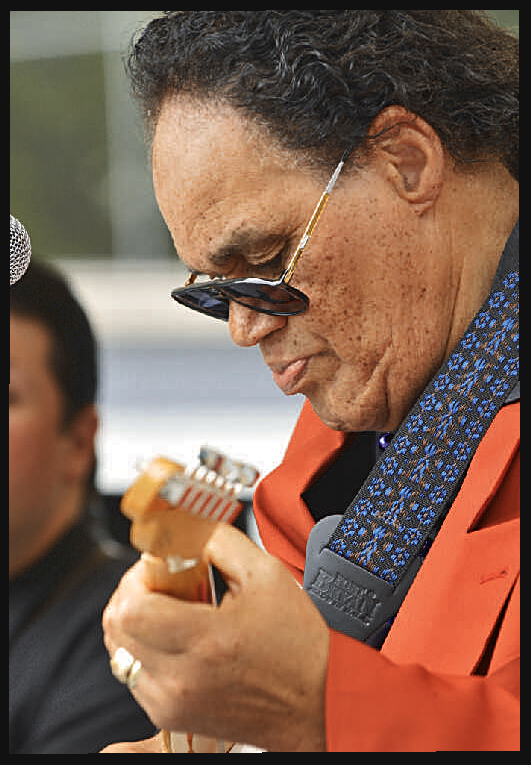 It is with a heavy heart that we report the passing of one of the greatest and most beloved traditional blues artists. Louisiana Red died this afternoon at a hospital in Germany after a few days in a coma brought on by thyroid imbalance. He was 79. Louisiana Red was a powerful downhome blues artist who could channel his teachers (among them Muddy Waters, Elmore James, Robert Nighthawk, Lightnin’ Hopkins and John Lee Hooker) into his own heartfelt musical conversation, delivered with such moving passion and honesty that it would leave his audiences indelibly touched. He was fine singer with a distinctive voice, and an amazing guitarist who could play all of the traditional blues styles and excelled as one of the world’s greatest slide guitarists. He could create moods and textures, both musically and spiritually, and had the ability of falling so deep into his own songs that he would go to tears, making his audience cry with him. That was the gift of this great artist.


Wikipedia lists Louisiana Red as being born in Bessemer, Alabama but his own reports have fluctuated from various Southern towns and cities. Red lost his mother at birth and his father was killed in a Ku Klux Klan lynching when Red was just 5 years old. He lived in an orphanage in New Orleans for a few a his childhood years until his grandmother took him to Pittsburgh to live. A few years later she bought him his first guitar, a $12 Kay. Red would play along with records and the radio and begged some guitar lessons from his first mentor, Crit Walters. It was early in life that Red made the decision to become a blues musician. In the late 1940s Red would follow his passion to Detroit where he would become friends with Eddie Burns and John Lee Hooker. He would make his first recordings in Detroit for producer Joe Von Battle under the moniker of Rocky Fuller, a pair of these recordings were leased to Chess records. He would accompany John Lee Hooker on a session for Modern Records and you can hear Red shouting “Lord Have Mercy” in the middle of JLH’s “Down Child”. Red would also land a 1953 recording session in Chicago for Chess in which he is accompanied by Little Walter on the brilliant “Funeral Hearse At My Door” which remained in the vaults unreleased for decades. Red’s next stop would be New York where he would record for producer Bobby Robinson and for Atlas Records. But it was Louisiana Red’s 1962 Roulette label recordings that garnered him national recognition as a bluesman. His single “Red’s Dream” with its humorous political commentary became a major hit and was followed by the Roulette album The Lowdown Back Porch Blues. This was followed by the 1965 release of Louisiana Red Sings The Blues on Atco. In the mid 70s he became the cornerstone of the Blue Labor label cutting two excellent solo acoustic albums; Sweet Blood Call and Dead Stray Dog and also appearing on that label as a featured sideman on albums by Johnny Shines, Roosevelt Sykes, Brownie McGhee, and Peg Leg Sam. He was romantically involved with folk legend Odetta for a small period of time in the 1970s. European promoters and booking agents took an interest, and Red found a new audience with his annual overseas tours. Labels such as L+R from Germany and JSP from England began recording Red, the latter debuting their catalog with Red, Funk and Blue, a duet album with Sugar Blue. Red appeared as himself in the movie Come Back featuring Eric Burdon of Animals fame. Red lived in Chicago for awhile in the early 1980s where he worked at the Delta Fish Market. He would then move to Phoenix in late 1981 where he lived and played with Bob Corritore for about a year.

Red left Phoenix for a European tour in late 1982, and it was then and there that he met his true love, Dora, who he married and spent the rest of his life with. Dora gave Red an uncompromised love and the constant companionship and protective looking-out-for that Red needed. Dora also provided the family situation that Red yearned for in his life as Red took great pride in his love and adoption of Dora’s sons. The positive impact and dedication that Dora provided Red was simply amazing. Red would live in Hanover Germany for the rest of his life with Dora and each year in January, the two would vacation in Ghana, Africa, Dora’s country of origin. He found work so plentiful in Europe that for a period of time he rarely would come to the USA. In 1995 Earwig Records would release Sittin’ Here Wondering. which had been recorded by Bob Corritore in 1982 and sat on the shelf for over a decade. This CD created a relationship between Red and Earwig label chief Michael Frank who would record 2 more records by Red and book annual US tours. Releases followed on High Tone and Severn as well as a documentary DVD released only in Europe. In 2009 Little Victor struck gold with his production of Red’s Back To The Black Bayou CD released first on the Bluestown Label and then picked up by Ruf Records. Victor had idolized and studied under Red for years and lovingly coaxed this brilliant album from his mentor. Back To The Black Bayou swept Europe and the US with awards and nominations. Simultaneously, Red’s collaboration with pianist David Maxwell produced You Got To Move, and in 2010 Red would go to the Blues Music Awards with 5 nominations and receive 2 wins! Little Victor also produced Red’s final critically acclaimed CD Memphis Mojo.

It is sad to say goodbye to the loving persona of this great bluesman who’s music warmed our hearts Louisiana Red’s vulnerability became his strength and he filled his heart with an unstoppable passion for music and acceptance. His legacy is great and his friendships are many. He can now rest in peace after a lifetime of giving us everything he had through his amazing blues. God bless you Red.

CD recensie: Louisiana Red – Back To The Black Bayou