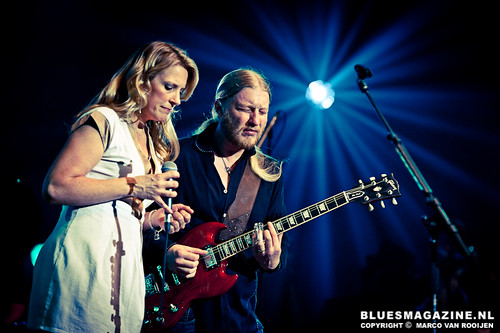 Everybody’s Talkin’—to be released on May 22, 2012 —is the title of the uplifting, energy-packed sophomore recording by Tedeschi Trucks Band, the 11-piece ensemble led by husband-wife team Derek Trucks and Susan Tedeschi that recently marked their first anniversary with a Grammy win for their debut album Revelator. TTB (as their fans know them) shows off a stunning rate of musical progress onEverybody’s Talkin’, eleven tracks selected from a year’s worth of concerts from around the globe plus one new track (“Nobody’s Free”). The performances—a hearty blend of originals and spirited covers of rock, R&B and even gospel classics—capture the group’s roots-rich musical mix, laced with Truck’s signature slide-guitar sound and fronted by Tedeschi’s pliant, honey-to-husky voice (as well as her own gritty guitar-work). The collection also includes all of the joyful, spontaneous energy that has helped TTB build a growing circle of fans and earned them an unprecedented string of triumphs in just the past few months.


Besides the Grammy for Best Blues Album of the Year in February, Trucks himself, along with TTB bandmate Oteil Burbridge, were honored with a Grammy Lifetime Achievement Award for their membership in The Allman Brothers Band. In March, Tedeschi and Trucks were invited to perform at the White House with B.B, King, Buddy Guy, and yes, President Barack Obama himself (who sang a verse of “Sweet Home Chicago”). A week later, they appeared at the Apollo Theater, joining Eric Clapton, Keith Richards, and a host of guitar heavyweights in an all-star tribute to bluesman Hubert Sumlin. On April 30th Tedeschi and Trucks will perform at the United Nations General Assembly in New York at a concert to celebrate International Jazz Day. Other featured performers include: Herbie Hancock, Esperanza Spalding, Wynton Marsalis and others.

“I really never imagined it would have turned out quite like this, especially the last few months. The momentum picked up and it just really started rolling—everything kind of happened at once,” says Trucks, who maintains that his focus, and that of TTB have remained steadfast on the music itself. “As over the top as a lot of that stuff is, the one thing I notice is, it doesn’t really feel any different than being on the road and having successful shows. The way the band took shape musically around the time that we decided to record a live record was pretty exciting.” 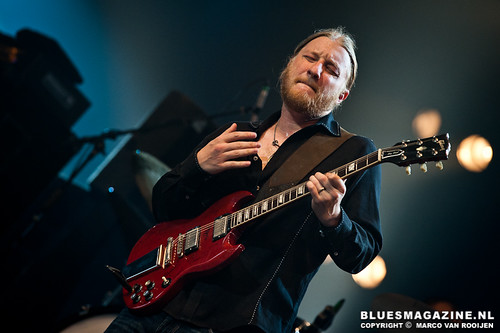 True to its intent, the tracks on Everybody’s Talkin’ flow one into the next with the collective spirit and lift of a typical TTB concert—raising the roof with a Saturday night sense of abandon, and gently concluding with a Sunday morning spiritual. Featured are versions of tunes from Revelator that are already crowd favorites—”Bound For Glory”, “Love Has Something Else To Say”—some with added details, like the fresh horn part that pushes “Learn How To Love” a notch higher than the studio original, or the tasteful, quotes of “Swamp Raga” and “Little Martha” on slide-guitar that set the stage for “Midnight in Harlem”. Other songs portray the group’s abiding affection for a truly wide range of soulful and gritty forebears, including Stevie Wonder (“Uptight”), Elmore James (“Rollin’ And Tumblin'”), Bill Withers (“Kissing My Love”), Joe Cocker (“Darling Be Home Soon”), Bobby Bland (“That Did It”), Harry Nilsson (“Everybody’s Talkin'”) and the traditional gospel (“Wade In The Water”).

Beyond the song list, the most attention-grabbing aspect of Everybody’s Talkin’ is the marked progress of the group itself, as this past year has seen TTB develop at a jaw-dropping rate into a fully mature ensemble. What was at the outset a powerful lineup of players that drew its power from a rich brew of roots music—blues, gospel, soul, and rock— has matured like a fine wine. Tedeschi’s vocals and Truck’s guitar-work are front-and-center as in the beginning, yet have become more intuitively intertwined. Tedeschi’s own guitar-playing is more strident and assured. TTB’s ace rhythm section works together with a deeper sense of funk, and a more liberated jazz feel. As an ensemble, they build a song from a tender whisper to a soul-rending scream, and often extend the close of a well-chosen R&B number into a thrilling, open-ended jam. Onstage, they exhibit interplay on the level of a group with years of experience together, improvising with almost telepathic link between all the musicians.

As Everybody’s Talkin’ is assuredly a group album, so TTB stands as a true musical collective, as opposed to the standard lineup of bandleader-with-backup. It helps that the eleven-member ensemble is one overflowing with talent and musical familiarity: besides Tedeschi and Trucks who are married and have two children, Mike Mattison (former lead singer with the DTB) and Mark Rivers handle harmony vocals, while brothers Oteil Burbridge (longtime member of The Allman Brothers Band) and Kofi Burbridge (another DTB member) play bass, and keyboards and flute, respectively. The lineup also includes a pair of drummers—J. J. Johnson and Tyler Greenwell—and a horn-section with trumpeter Maurice Brown, tenor saxophonist Kebbi Williams, and trombonist Saunders Sermons (Sermons will also step forward for a vocal feature now and again, as he does on “Kissing My Love”).

Trucks compares the rapid growth of TTB favorably with that of his first group, The Derek Trucks Band. “I remember the last five years with the DTB we started really feeling that the thousands of shows in front of 30 people in bars were finally starting to pay off, to the point that there was this wave of goodwill with people rooting for the band to make it. But I feel like this band went through that same thing in a smaller time scale.” 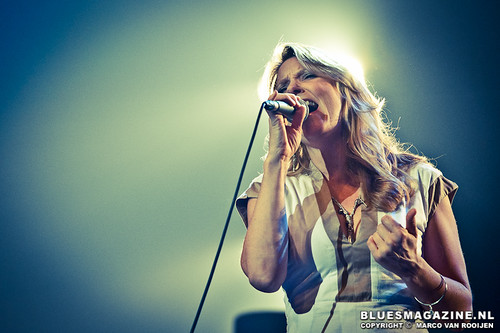 According to Tedeschi, the group’s accelerated progress owes much to the way that her husband leads the band—more like a jazz ensemble, allowing enough freedom for the group to find and nurture its own strengths. “Derek is a great leader in the way that he knows the potential of everyone in the band and has a really nice way of trying to show off all the talent in this group. Because it’s such a big band, we only have so much time to play all the songs and make sure they’re done right, but then you want to showcase people. I think he has a really good handle on how to make that work.”

As evidence of this more democratic approach, Tedeschi points to the notion of TTB as a group that encompasses many possible lineups, depending on who’s taking the spotlight or even onstage at any given moment. “There are times when I’ll leave the stage or the horns might step away and it will just be a trio or a quartet out there, with Derek, Oteil and maybe J.J. doing their thing. Then slowly the others will start coming up and adding to the music. Every show is exciting but it’s not always 11 pieces blaring at you. There’s always a different mix and there’s so much going on.”

The mix Tedeschi speaks of is one that TTB shares with their audiences every time they hit the stage—gleefully delivering concerts that never fail to connect with their listeners. Everybody’s Talkin’ serves both as evidence of the smiles they leave behind as they continue to tour and develop, as well as a catalog of the group’s first triumphant year, with a promise of more progress and adventures to come.

With a marked sense of pride, Trucks admits that at this point, “the only goals are to continue refining what we have, to keep the flame lit and keep rolling.” “The great thing about this band,” Tedeschi adds, “is that we realize we don’t have to please anybody other than ourselves. And honestly if you can make this eclectic group happy, that’s an accomplishment! It’s moving fast in a really great direction.”