From the air-raid guitar riff that opens Lead Us Away, Simon McBride’s Crossing The Line is an album that demands your attention. Following two releases that made the Belfast bandleader’s name, this third studio album stretches his talent, rejects the conventions and clichés of blues-rock, and delivers his greatest set of songs to date. Crossing The Line: it’s an apt title for an album with no limits.

Crossing The Line is a tale of two cities. The sleeve photos were shot by the railway tracks near Belfast’s Titanic Museum, and Simon’s hometown was also the backdrop for the recording of his rhythm guitar parts. Just as pivotal was Annapolis, Maryland, where the 33-year-old was personally invited by Paul Reed Smith – founder and namesake of the legendary US guitar firm that has endorsed Simon since adolescence – to track lead guitar, vocals and other instruments in his private recording studio. Given his association with icons like Carlos Santana and Dave Navarro, it’s testament to Simon’s talent that Smith rates him so highly, and the luthier was surely thrilled by what he heard shaking through the walls.

Flanked by the world-class engine-room of Carl Harvey (bass) and Paul Hamilton (drums), Simon is on fire throughout Crossing The Line. The fans who hang off the security rail waiting to be scorched by his fretwork will find plenty to admire, from the furious break in Go Down Gamblin’, the fuzzy wah stomp of Heartbreaker, the twisty acoustic fingerstyle of A Rock And A Storm, and the glorious moment in No Room To Breathe when the tension explodes into an epic emotive solo. But he’s always been more than a guitar slinger, and this third album is also a showcase for Simon’s songcraft and character-soaked vocals, which spin tales of girls, gambling and corporate avarice (“All this wealth and money,” runs his opening gambit on Lead Us Away, “is nothing but selfish greed…”). 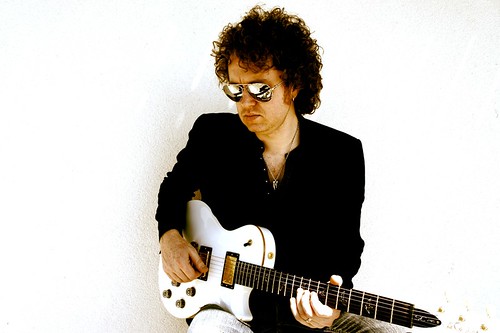 Simon himself produced the record, bottling a powerhouse sound that was naturally achieved using PRS equipment, most notably the HXDA amplifier, whose vintage tone was created by studying the circuitry of the actual ’60s Marshall head used by both Jimi Hendrix and Duane Allman. By the time these 11 tracks reached New York for the mix by Peter Denenberg (the veteran producer and engineer whose CV takes in everyone from Deep Purple to Robert Cray), it was clear Simon was armed with an album that truly delivers on his potential.

And what potential. Rewind to the early-’90s, and you didn’t have to squint to spot future greatness in the unassuming kid from Belfast, who picked up his first guitar at ten and eschewed formal lessons to bend his fingers around the music of Free, Jeff Beck and Hendrix. Aged 15, Simon won Guitarist’s hotly-contested Young Guitarist of the Year competition in a Wembley Conference Centre showdown, and at 16, he turned pro, leaving education behind to wow the world as a hired gun in projects than ranged from metal with Sweet Savage, to R&B and soul with ex-Commitments vocalist Andrew Strong.

Even by the lofty standards of Northern Ireland, where drinkers still raise a toast to the audacious talent of the late Rory Gallagher and Gary Moore, this young maestro’s name was soon starting to be dropped in the same reverential breath. Certainly, Simon is a fan, and the energy and aggression of his live show recalls those much-missed Irish masters, but when he inked a solo deal with the boutique Nugene label and released debut album Rich Man Falling in 2008, it was clear this musician was nobody’s heir, but rather his own artist.

Initially targeted at the continental blues market, Rich Man Falling hit the international scene like a train, with Simon showcasing his original material at European festivals, building the buzz with UK support slots for heavyweights like Jeff Beck, Joe Bonamassa and Derek Trucks, and scoring accolades in the British press (“Hugely accomplished,” said Mojo, while Classic Rock declared the album “Blues rock par excellence”). The inclusion of Free’s Be My Friend and Hendrix’s Power Of Soul showed his ability to make a cover his own, but as the financial bubble burst, Simon’s own writing already showed rare maturity on moments like Rich Man Falling, with its tail of a destitute City hot-shot.

Simon McBride had arrived. Even so, the rising songwriter found another gear with his 2010 follow-up album, Since Then, which announced a sharpening of his songcraft on its 14 original cuts, and earned plaudits from leading music magazines (“There is a new star on the horizon,” noted Guitar Techniques). A UK tour opening for guitar wizard Joe Satriani gave this second album a boost, while Simon proved his appeal reached far beyond guitar nuts with a set at Glastonbury 2011, and Don Airey’s Soul & Blues Festival.

By now, as proved by his fistful of British Blues Awards nominations, Simon was no longer the blues-rock scene’s best-kept-secret, but one of its leading lights. He even began passing on his enthusiasm in his role as a visiting tutor at the Dublin faculty of BIMM (Brighton Institute of Modern Music).

This year has already been Simon’s busiest to date. In March, he offered website visitors a free download of fan-favourite Rich Man Falling, reworked in an intimate acoustic format and accompanied by a video performance streamed on YouTube. In April, his incendiary Nine Lives album – featuring nine cuts recorded during his 2011 UK tour – reminded us what a screamingly exciting live performer he is, and moved Classic Rock to describe it as “sounding like the best night out in town”. Four bonus acoustic tracks, meanwhile, underlined the power of his music, even when it’s stripped to the bone.

It’s all been building up to September 24, and the international release of Crossing The Line: the album that will recruit more followers to Simon’s fanbase, raise the bar for blues-rock, and kick out a chair at the top table of the genre. This is the sound of a world-class talent. Get in line.

Recensie: Simon McBride – Show Me How To Love (EP)