Release : Rory Block – Shake ‘Em On Down: A Tribute to Mississippi Fred McDowell

RORY BLOCK IS READY TO SHAKE ‘EM ON DOWN WITH NEW TRIBUTE TO MISSISSIPPI FRED MCDOWELL ALBUM COMING MARCH 29, 2011 FROM STONY PLAIN RECORDS

Shake ‘Em On Down is Rory’s second album for Stony Plain and follows her critically acclaimed 2008 label debut, Blues Walkin’ Like A Man, her tribute to the legendary Son House. Along with her 2006 Robert Johnson tribute CD, The Lady And Mr. Johnson, and her last album, Ms. Block has now recorded a trilogy of albums saluting three of her mentors on acoustic blues guitar. Shake ‘Em On Down includes Rory’s scintillating takes on several of McDowell’s classic sides, such as “Kokomo Blues,” “Worried Mind,” “Write Me a Few of Your Lines,” “Woke Up this Morning” and the title track; covers of a few lesser-known McDowell songs plus Sonny Boy Williamson’s “Good Morning Little School Girl;” and four originals written by Rory that focus on her musical relationship with the blues icon. The CD is also being released in conjunction with her long-awaited autobiography, “When A Woman Gets The Blues.”

“I met Fred McDowell at a time in my life when I was most impressionable, and when the effect would deeply inspire and educate,” recalled Block in the new CD’s extensive liner notes. “That experience – along with meeting other surviving country blues masters such as Son House, Mississippi John Hurt, Skip James, Bukka White and Reverend Gary Davis – would become a life-long influence. These experiences are the foundation of my on-going new project, ‘The Mentor Series,’ a growing collection of tribute albums to the masters who I had the distinct privilege of meeting face to face. It was the edge of an era, the fleeting moment when one generation passes the mantle to another. Everything is different now, but the been-there-done-that remains indelibly imprinted on my soul. In the process I am experiencing a kind of rejoicing, a sense of completion and fulfillment of purpose.

“With Fred McDowell I chose to apply an inspired overlay that moved between the old and the new, blues with a tinge of jazz, and my own technique added to the mix… and thus I have a tribute which seemed to derive energy from the man I knew in person in 1965, but which ultimately lives comfortably in 2011. McDowell’s iconic style was a direct bridge between the early acoustic techniques of House, Patton, Waters and Brown—and the electric blues of Bonnie Raitt and other contemporary players.

“Fred was famous for saying ‘I don’t play no rock ‘n’ roll’ – but in fact he did… or if he did not, he practically invented it. He (much like Muddy Waters) taught electric players how to take the rock solid groove of the soul of country blues and bring it into modern music. McDowell was a player who laid down a beat and didn’t let up. His music was formed in a day when the need for the diversion of endless changes didn’t seem to exist. People valued the drive—they wanted to dance and tap their feet. They didn’t require the bridges, choruses, or clever formats our entirely glitzy music business demands today.” 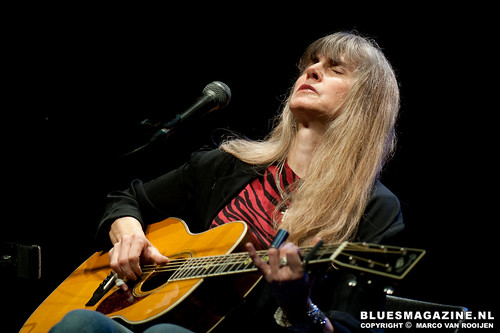 Since her teenage years, Rory Block has been on a blues path that has brought her international recognition as (Guitar Extra proclaimed) “one of the world’s most important preservers of the roots of American music…a national treasure in the form of an uncompromising mature blues artist.”The New York Times summed up a Rory Block performance by stating: “Her playing is perfect, her singing otherworldly, as she wrestles with ghosts, shadows and legends.”  And The Blues Foundation said, “Today she is widely regarded as the top female interpreter and authority on traditional country blues worldwide.”

In addition to the critical plaudits she’s received over her extensive career, Rory has won five W.C. Handy Awards (now known simply as Blues Music Awards) from The Blues Foundation: two for “Best Traditional Blues Female Artist” and three for “Acoustic Blues Album of the Year.” She also tours constantly all over North America and throughout Europe.

Shake ‘Em On Down Complete Tracklist:

Recensie : Jeff Beck – Live and Exclusive from the Grammy Museum