At age 65, West stands entirely undiminished on The Unusual Suspects, a proud mix of boogies, blues, rockers and ballads that puts his songwriting skills at the fore in tunes like the hard rocking “Mississippi Queen” flashback “Mudflap Mama” and the sweet, soulful love song “You and Me.”

West’s title for the album was inspired by his handpicked roster of A-list six-string co-stars, which includes Z.Z. Top’s Billy Gibbons, Slash, ex-Ozzy Osbourne foil Zakk Wylde, blues-rock firebrand Joe Bonamassa and L.A. session giant and Toto leader Steve Lukather. The other distinguished guest is drummer Kenny Aronoff, whose powerhouse style has made him a first-call accomplice for John Fogerty, John Mellencamp, Willie Nelson, Rod Stewart and many others.

“These guys don’t show up to play on everybody’s albums,” West declares. “They’re all stars in their own right, and fantastic players — every one with their own sound and style, and about as far from ‘the usual suspects’ as it gets.” 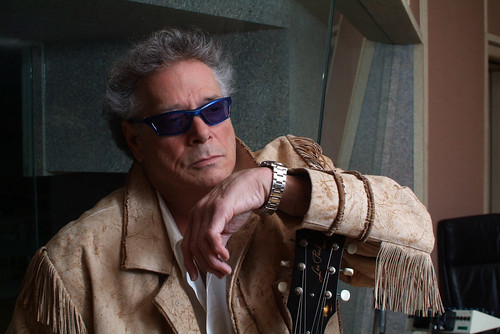 Legendary guitarist and Mountain founder Leslie West will release a brand new solo album entitled Unusual Suspects on Monday September 19th 2011. The album is his first since 2006’s Blue Me.

“These guys don’t just show up to play on everybody’s albums,” says West on his special guests and the album’s title. “They’re all stars in their own right, and fantastic players — everyone with their own sound and style, about as far from ‘the usual suspects’ as it gets.”

Leslie West has long been a popular personality on the Howard Stern Radio Show in America. It was Stern whom he gave an interview in late June 2011, from his hospital bed, mere days after undertaking life-saving surgery which saw his leg amputated above the knee.

On June 17th, West (a long-time sufferer of type 2 Diabetes) was aboard a long-haul flight to Mississippi to perform at the Hard Rock Hotel and Casino, when the limb began to swell. He was rushed to the emergency room and lost consciousness. The decision to proceed with the operation was made by his wife, Jenni, who remarks “It was his leg or his life.”

Such a life-changing ordeal would surely deter other artists, but West is already looking firmly forward, insisting that Unusual Suspects’ release date was not altered because of his condition. “Now I’ve got to figure out how to play the guitar [whilst standing] on one leg,” he states, under no illusions regarding the size of the task ahead. “The prosthetic ones they have these days are really good, but of course I’m used to balancing my weight on two feet. I’m going to have to retrain myself.”