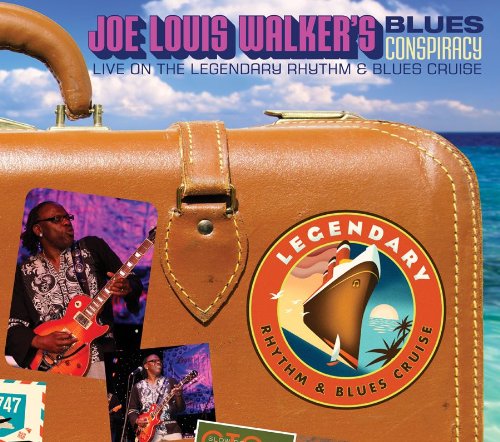 Joe Louis Walker has announced he will release a live album in September, his first album since winning the Blues Music Award for Album of The Year for his stellar “Between A Rock & The Blues”.
Walker will release Blues Conspiracy: Live On The Legendary Rhythm & Blues Cruise September 28, and as the title implies the music was recorded during his appearances as part of the Legendary Rhythm & Blues Cruise

The spirit of blues tradition of collaboration was alive and well on the cruise as Walker was able to get some of the biggest names to join him onstage. Among those who jammed with him and feature on the record are Johnny Winter, Curtis Salgado, Nick Moss, Tommy Castro, Jason Ricci, Watermelon Slim, and Duke Robillard.

The 11-track live album features songs from Walker’s recent recordings – “Witness To The Blues” and “Between A Rock & The Blues” – and some well-chosen covers. Walker says he’s been asked for years by fans when he’d release another live record. Walker thinks Blues Conspiracy was worth the wait and hopes fans will, as well.
“I would like to thank all the great musicians involved in this project for giving their heart, soul and talent to this collaboration,” says Walker. “This was not about money, ego and so called fame. It was about the music. As you can see, these artists are a mixture of ages and styles.
‘
The one thread running through us all is the blues. For all the fans of live music, what you hear on this CD is what the audience heard at the performances. There are no enhancements or overdubs. In other words, what you hear is what it was and what it is. What a tribute to the quality of all the wonderful musicians involved.”

Recensie: The BB King Blues Band – The Soul Of The King