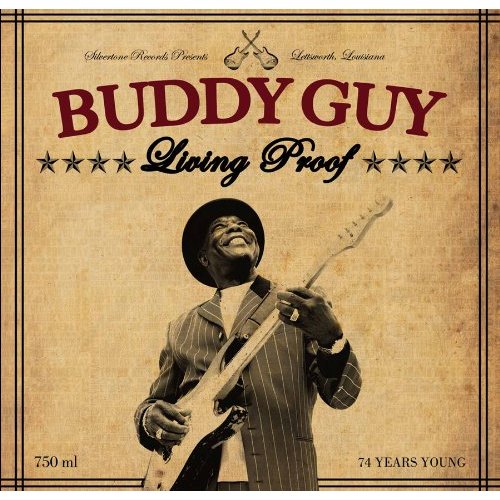 “When I was 21,” says Buddy Guy, “some of my older friends, who are no longer with us, they’d say, ‘You’re still a baby.’ And then they said the same thing when I was 31, then 41, and I thought, ‘Man, when do I get old?’ I’ve been hearing that ever since I first went to Chicago—’You’re still wet behind the ears.’ So when do I get dry?”

With his new album, Living Proof, Guy takes a hard look back at a remarkable life. At age 74, he’s a Rock and Roll Hall of Fame inductee, a major influence on rock titans like Jimi Hendrix, Eric Clapton, and Stevie Ray Vaughan, a pioneer of Chicago’s fabled West Side sound, and a living link to that city’s halcyon days of electric blues. He has received 5 Grammy Awards, 23 W.C. Handy Blues Awards (the most any artist has received), the Billboard magazine Century Award for distinguished artistic achievement, and the Presidential National Medal of Arts. Rolling Stone ranked him in the top 30 of its “100 Greatest Guitarists of All Time.”

Yet as the album’s opening track declares, today Buddy Guy is “74 Years Young,” still searching for new sounds and fresh ideas. The start of each new decade always seems to inspire him (see 1981’s Stone Crazy, 1991’s Damn Right, I Got the Blues, and 2001’s Sweet Tea), and on Living Proof, such songs as “Thank Me Someday” and “Everybody’s Got to Go” are strikingly personal meditations on his past, his legacy, and his mortality.

“The life I’ve lived is what we’re singing about,” he says. “These songs are exactly what I came up through in my life, what I’ve experienced.” He credits producer/drummer Tom Hambridge (who co-wrote all the songs on Living Proof, and has previously worked with such artists as Johnny Winter, Delbert McClinton, and Susan Tedeschi) with helping to capture and preserve his innermost thoughts. “He would come in with a pad and a pencil,” says the guitarist, “and while we were having conversations, he was writing down things I said and making songs out of them.”

Still stinging from the restrictions that the legendary Chess Records put on him during his youth (“they said I was just playing noise, and wouldn’t let me get loose like I wanted to”), Guy also says that his music continues to benefit from the support of his record company and the team around him. “These guys said, ‘It’s your guitar, your studio, you just go be Buddy Guy’—and I’ve been trying to be that for 50 years,” he says. “I had the freedom of playing with only me to say, ‘Let me try that again.’”

Though Buddy Guy will forever be associated with Chicago, his story actually begins in Louisiana. One of five children, he was born in 1936 to a sharecropper’s family and raised on a plantation near the small town of Lettsworth, located some 140 miles northwest of New Orleans. Buddy was just seven years old when he fashioned his first makeshift “guitar”—a two-string contraption attached to a piece of wood and secured with his mother’s hairpins.

On “Thank Me Someday,” he recounts his early efforts with the instrument, and his ability to keep his faith when his family chased him out of the house for making a racket. “I would go out in the yard, on the levee, to practice,” he says. “We didn’t have electric lights or running water—you could hear that guitar a mile away in the country, so I’d have to go a long way away so they didn’t say ‘Get out of here with that noise!’”

In 1957, he took his guitar to Chicago, where he would permanently alter the direction of the instrument. His incendiary style—still in evidence all over Living Proof—left its mark on guitarists from Jimmy Page to John Mayer. “He was for me what Elvis was probably like for other people,” said Eric Clapton at Guy’s Rock and Roll Hall of Fame induction in 2005. “My course was set, and he was my pilot.”

Though the name Buddy Guy will always be associated with the blues, this set of songs illustrates the true range of his playing. Songs like “Much Too Soon” and the blistering instrumental “Skanky” come directly out of the roadhouse rhythm & blues tradition. To Guy, though, such genre distinctions are meaningless afterthoughts.

“Before the ‘60s, we were always just R&B players,” he says. “Then they branded us—there was Chicago blues, Memphis, Motown, and so we were considered blues players. But in Chicago, if you wanted to keep your gig, you had to be able to play all the top tunes on the jukebox, whether that was Lloyd Price or Fats Domino or Ray Charles. Now if you play a Little Richard song, the audience looks at you like you’re crazy, but we always had to do that for a black audience back then.”

Perhaps the most significant landmark on Living Proof is that, for the first time, the incomparable B.B. King stopped by to play and sing on a Buddy Guy album. The two giants reel off the introspective “Stay Around a Little Longer” like the old friends they are—but Guy still doesn’t take his relationship with the King of the Blues for granted.

“B.B. created this style of guitar we all play,” he says. “I grew up listening to people like him, T-Bone Walker, Muddy Waters, and I still take 95% of my playing from him. So to have someone like that in the room with you makes chillbumps come up on your skin.”

The only other guest on the mostly stripped-down Living Proof is Carlos Santana, who joins Guy on the slinky “Where the Blues Begins.” Noting that he and Junior Wells covered Santana’s “Vera Cruz” more than three decades ago, Guy says, “When I’m playing with someone that good, I just have to close my eyes and say, ‘Here I come!’”

Asked what exactly it is that he considers himself Living Proof of, Buddy Guy answers modestly—he doesn’t mention his talent or his influence, but focuses instead on his perseverance. “Do you know how many guys I started out with who just threw up both hands and quit?” he says. “My first wife said to me, ‘It’s me or the guitar,’ and I picked up my guitar and left. We still laugh about that. But I’m still picking away at it, I don’t know nothing else.

“The other day, I heard B.B. King say, ‘I can’t slow down, because I still think there’s somebody out there who doesn’t know who I am yet.’ But, you know, blues players don’t stop, they just drop. It’s like my mother used to say about religion—I’m too far gone to turn around!”