Five time Grammy Award and Grammy Lifetime Achievement Award winners The Blind Boys of Alabama will release a traditional country-gospel album for the first time in their 70-year career on May 3rd, 2011 (Saguaro Road Records). One of country music’s most acclaimed and compelling artists, Jamey Johnson, co-produced the album and performs on it along with Vince Gill, Willie Nelson, Hank Williams Jr., Lee Ann Womack, and The Oak Ridge Boys, backed by an A-list of top Nashville studio musicians. The result is a stunning, powerful testament to the deep, historic relationship between country and gospel music.

“There wasn’t one person who didn’t bawl like a baby or bust their heart open at least once,”Johnson recounted to the New York Timesrecently, remarking on the intensity of the recording sessions. “It’s been a dream of mine to do a country gospel album and we couldn’t have found a better partner than Jamey” said Jimmy Carter, the last original Blind Boy still touring with the band. “This album beautifully combines two of the seminal roots of the American music tree, gospel and country music. The Blind Boys, Jamey and their hand-picked guests deliver this music in a searingly authentic way,” adds Mike Jason Senior Vice President, Retail for Saguaro Road Records

The concept for the collaboration started with original Blind Boy Jimmy Carter’s longstanding love of country music and his desire to do a traditional country-tinged gospel album. Last year, his idea started to take shape when the Blind Boys were asked to curate a series of shows at the prestigious Lincoln Center Festival. One of the sold-out nights featured country artists Ralph Stanley, Ray Benson (Asleep At The Wheel) and Allison Moorer. Soon after, they met Jamey Johnson and asked him to join them in singing the traditional song “Down By The Riverside” at the Alabama Music Hall of Fame induction ceremony. Their mutual respect and shared passion for old-time gospel music made for a powerful performance, and that magical moment led to the Blind Boys asking Jamey to produce their next CD. The band had already been planning to make a country record with their Grammy-winning production collaborator Chris Goldsmith, who had enlisted the help of veteran Nashville drummer Chad Cromwell (Neil Young, Mark Knopfler). Jamey then brought in bassist Kevin ‘Swine’ Grantt (Brad Paisley, Daryl Worley) and additional top-notch Music City players, including legends such as guitarist Reggie Young, to join them in the studio. A fantastic array of guest vocalists – Vince Gill, Willie Nelson, Hank Williams Jr, Lee Ann Womack and The Oak Ridge Boys – added to the recording sessions while new friendships were quickly formed and soulful sounds were crafted out of a shared love of real and authentic spiritual music.

The result is a remarkable album, which mines the profound connections between traditional country and gospel music. The amazing spirit and soul of the Blind Boys is celebrated through the songs, some time-tested like Hank Jr.’s energetic re-working of his father’s “I Saw the Light,” and some more recent chestnuts like Danny Flower’s underground classic “I Was a Burden.” Recorded live in just a few days at Ben Folds’ Javelina Studio, the album has the soulful feel of an old-school country classic. In fact, the word got out during the session that something special was going on at the old RCA soundstage, and guests like George Jones, Bill Anderson, and Bobby Bare dropped by just to observe the proceedings. All of them were visibly touched by what they experienced.

This record follows in the renowned Blind Boys tradition of reaching across musical boundaries to collaborate with other artists (from Peter Gabriel and Lou Reed to Anthony Hamilton, Ben Harper and Third Day) to create music that is appreciated as heart-warming, innovative, and inspirational by people from all walks of life.

The Blind Boys of Alabama continue to tour the world, performing over 150 concerts each year.  Honored by both the Grammys and The National Endowment for the Arts with Lifetime Achievement Awards, inducted into the Gospel Music Hall of Fame, and winners of five Grammy® Awards, The Blind Boys have attained the highest levels of recognition in a career that spans over 70 years and shows no signs of diminishing. Longevity and major awards aside, The Blind Boys have earned praise for their remarkable interpretations of everything from traditional gospel favorites to contemporary spiritual material, and now country, by acclaimed songwriters such as Curtis Mayfield, Prince and Tom Waits. Their performances have been experienced by millions on “The Tonight Show,” “Late Night with David Letterman,” the Grammy® Awards telecast, “60 Minutes II,” and on their own holiday PBS Special. The Blind Boys’ live shows are roof- raising musical events that appeal to audiences of all cultures, as evidenced by an international itinerary that has taken them to almost every continent. In 2007, they released the Grammy winning album, Down in New Orleans, their first for Saguaro Road Records, which was followed in 2008 by a companion DVD, Live in New Orleans. In 2009, they released Duets, a collection of songs recorded with artists including Bonnie Raitt, Ben Harper and Randy Travis. 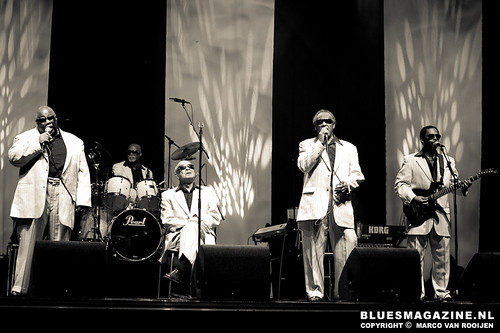