Quinn Sullivan has been a music professional for more than 75 percent of his life. He’s shared the stage with Buddy Guy, Eric Clapton, Los Lobos, The Roots, Derek Trucks & Susan Tedeschi and Joe Bonamassa, and he opened for B.B. King, who later invited him to play his treasured “Lucille” guitar. He has performed on concert and festival dates throughout the United States – including at storied venues like Hollywood Bowl, RFK Stadium and Madison Square Garden – traveled overseas – performing at both the Montreux Jazz Festival and India’s Mahindra Blues Festival – and played several editions of the Experience Hendrix Tour, backed by Jimi’s original bassist Billy Cox. He’s also appeared on national TV, with guest appearances on The Tonight Show with Jay Leno, Oprah, Late Night with Jimmy Fallon, Conan and twice on The Ellen DeGeneres show.

Yes, Sullivan has packed some extraordinary experience into his decade-long career, and that’s even more remarkable when you consider that he’s only 17. His third studio album, Midnight Highway, was produced by multi GRAMMY® winner Tom Hambridge – who also does double duty as Quinn’s studio and road drummer – and will be released on January 27th in North America, and on March 24th in the rest of the world. The album is yet another milestone in Quinn’s extraordinary journey, which began with him jamming with the kids music combo Toe Jam Puppet Band at age three, appearing on Ellen when he was six, and being taken under the wing of blues legend Buddy Guy at age eight, whose protégé he remains to this day.

Quinn’s age and enduring relationship with Buddy Guy is certainly notable, but so too is his total dedication to his craft. “I wanted to see how far we could get musically on this album. I had a lot more creative input on this one and was more active in writing, so it’s something of a mixture. I didn’t want to completely break away from the blues – that’ll always be my home ground – but I just wanted to stretch out. Mastering the vocals was important too and was the result of a lot of playing and touring, and studying with a vocal coach. I’ll admit I hit an awkward stage with my voice when it was changing a few years ago, but I like the way things have worked out so far.” 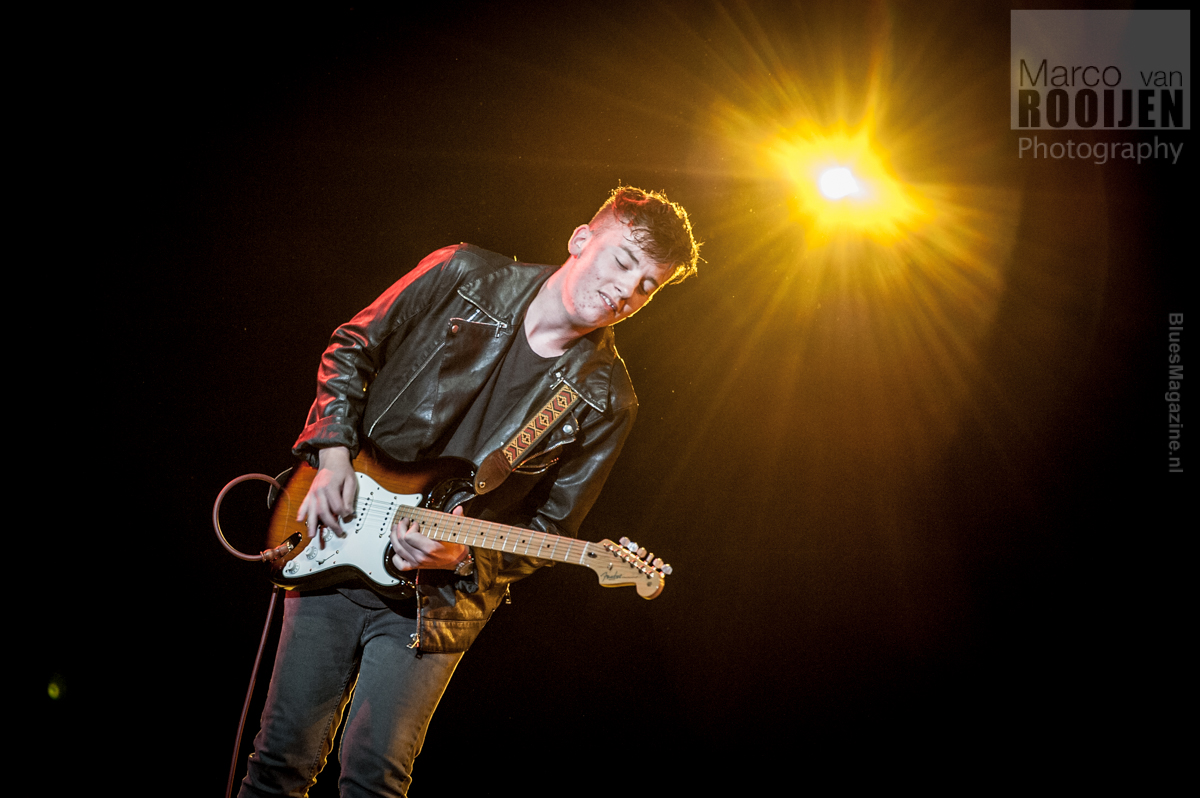 Quinn confides, “My major goal as an artist is to get into songwriting more,” and he’s well on his way with Midnight Highway, for which he had a hand in writing three of the stand-out tracks, “Eyes For You”, “Lifting Off” and “Going.” One of the other songs that Quinn tackled is George Harrison’s “While My Guitar Gently Weeps.” While Quinn will forever be rooted in the blues, he’s extremely passionate about The Beatles, so every effort was made to replicate the Harrison classic as faithfully as possible. Producer Tom Hambridge remarked, “We really tried to make it sound like it was off the White Album, so we researched everything about the track, where the mic placement should be, how to get the organ to sound like the original. Quinn is such a huge Beatles fan so, of course, he really loved the process.”

The album was recorded primarily at Nashville’s prestigious Blackbird Studio with some of the greatest players in Nashville, including many of the same musicians who played on the Buddy Guy albums that Hambridge produced. These include bassists Michael Rhodes and Tom Macdonald, guitarist Rob McNelley, and keyboard player Reese Wynans, a veteran of Stevie Ray Vaughan’s Double Trouble. Hambridge notes, “Quinn was anxious to make an album the way I make those Buddy Guy albums, and he did, in fact, tear it up. Quinn felt the mojo and he ‘brought it’ in a big way.” 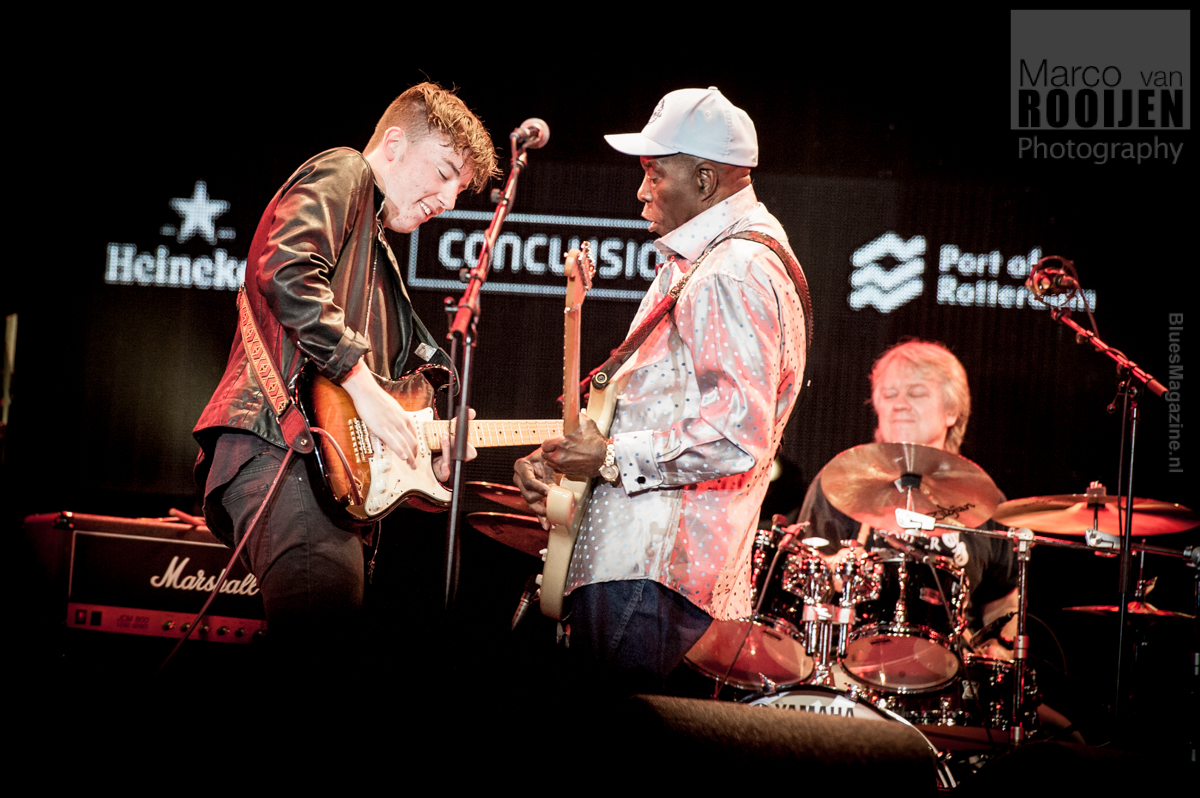 As a young child, Quinn was brought to numerous festivals and concerts by his music-loving parents. He was the “kid with the guitar “ in the audience, who would strum along with what was happening on stage. Through videos, Quinn became enamored with Buddy Guy, so his Dad made arrangements for him to meet his idol when Guy came to his hometown. Backstage before the show, he asked Buddy to autograph his guitar which, of course, he did — but on condition that the boy play it for him. That led to Buddy calling Quinn onstage to join him during his set and an unlikely, though solid bond was then formed between the great Chicago bluesman and the eager youngster from Massachusetts.

Tom Hambridge calls Quinn “a sponge who soaks up everything that’s around him,” adding, “he’s listening all the time and he just so happens to be around great artists. Every time he plays, it’s a little deeper. Buddy Guy is, of course, his mentor, so he channels Buddy’s over-the-top reckless abandon.” That’s completely understandable, as Buddy has, more than once, advised Quinn, “Just go out there and show them why you’re here… make them remember you.”

Off stage, Quinn is well aware of the unique opportunity he’s been afforded and is focused on music as an ongoing pursuit. He contrasts his experience with many of his contemporaries’ – “They’re struggling to come up with what they’re going to do when they’re out of school, but I’ve decided this is what I’m going to be doing for the rest of my life.”