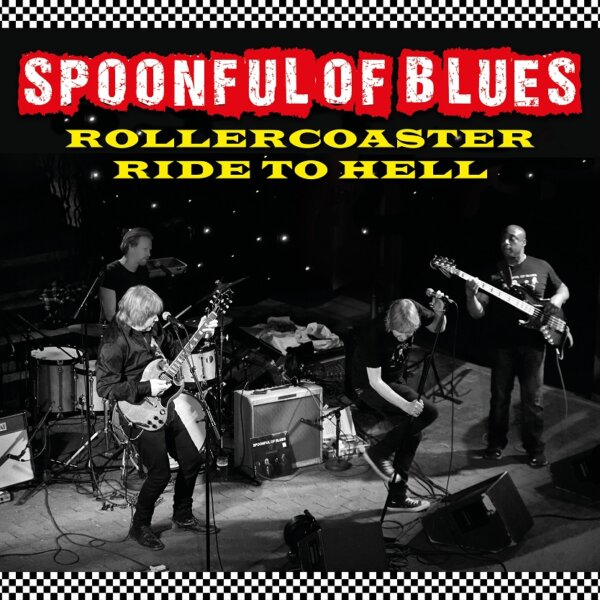 Norwegian blues favorites, SPOONFUL OF BLUES, are debuting their first single, ROLLERCOASTER RIDE TO HELL, from the group’s upcoming album scheduled for release in May 2022.

ROLLERCOASTER RIDE TO HELL has become a “tour de force” blues/roots rocker filled with catchy melody lines and musicianship bursting with energy. The song is written by band members Morten Omlid and Jostein Forsberg and was recorded in the famed Juke Joint Studio owned by the Notodden Blues Festival. A key element for the sound in Juke Joint Studio is the 24 channel Audiotronic Son of Grand mixing console that once used to be in the Stax Studio in Memphis. SPOONFUL OF BLUES hails from Notodden, Norway and this internationally touring band has spent their time well this fall touring and recording. Spoonful of Blues was last seen in the USA at the Tampa Bay Blues Festival 2019.

SPOONFUL OF BLUES has spent the break from touring during the Covid-19 period to write new songs and record. Earlier in the pandemic they released the song CORONA TIME to wide acclaim. Now ROLLERCOASTER RIDE TO HELL is making starting to make waves on radio programs through out Scandinavia and Europe. This past summer and fall the band has been back on the road. A string of sold out shows have once again boosted the band’s energy and reignited their reputation as a crowd pleaser.

SPOONFUL OF BLUES is back full force and ROLLERCOASTER RIDE TO HELL is destined to become a new fan favourite in the live shows of this unique band from the Bluestown of Notodden. For those not in the know, Notodden is a former industry town in the Telemark region of Norway. The town is internationally known for its award winning Notodden Blues Festival.

ROLLERCOASTER RIDE TO HELL will sound familiar and be easily recognizable for the group’s fans with up front guitars and harmonica and the characteristic vocalizing and harmonizing of the band members. The song deals with that we all are all victims of the choices that we make, and that we must be ready for the consequences. There are always consequenses. Making bad desicions will ultimately lead to trouble down the road. Problems on personal levels or in the bigger picture, on the state of our nature and on going climate change. Making right or wrong choices and desicions are crucial in so many ways, but it’s not always easy to stay on the straight and narrow.

“We wanted to release a song now that our audience can relate to, and that could become a new fan favorite at our concerts. The fans should recognize us when we come back out and understand that we have definitely not become “corona-lazy” during the pandemic. We are super ready to tour and entertain with new material», says guitar player Morten Omlid.

ROLLERCOASTER RIDE TO HELL is recorded at the legendary JUKE JOINT STUDIO in Notodden, and is being released by Notoddens own record label, BLUESTOWN RECORDS.

“Juke Joint Studio is perfect for Spoonful of Blues. The vintage equipment from Memphis makes it easy for us to find the sound that we’re looking for. There are be more singles in the pipeline, and the full album is scheduled for release in May 2022. In the meantime we’ll continue to tour and keep the party going with our loyal fans”, says Morten Omlid.