“Comin’ on like a sci-fi hybrid of T-Bone Walker, Little Richard, and Guitar Slim, guitarist/singer Nick Curran is a powerhouse performer who owes a strong debt to blues and rockabilly artists of the ’50s.” – All Music Guide

“Nick and his group mix jump blues, boogie, and greasy rock and roll into a perfect stew.” – Vintage Guitar

“Curran delivers a powerful punch on his latest album. The retro-styled record sounds astonishingly fresh. This is the real deal, baby.” – Guitar Edge

“One of the most authentic and exciting roots musicians of his generation” (All Music Guide) Is Back, Following Awards, Critical Huzzahs & Turn On HBO’s “True Blood”

Called “just a total ass-kicker” by no less an authority than Jimmie Vaughan of The Fabulous Thunderbirds (with whom he played for three years), the Austin-based Curran and his new rock ‘n’ roll roots band, The Lowlifes, pull out all the stops on the new album. Curran recorded ‘Reform School Girl’ on vintage instruments and analog equipment, all the better to recreate the raw, explosive sound of early R&B and rock ‘n’ roll 45’s that he loves.

Tracks such as “Tough Love” and “Lusty Li’l Lucy” show the influence of Little Richard and Chuck Berry, while the title track – with its refrain, “She stole my heart and then she blew this town” – pays homage to girl groups like the Shangri-Las and The Ronettes. “Baby You Crazy” recalls The Sonics at their loudest.

Nick Curran’s previous release, ‘Dr. Velvet,’ garnered the 2004 W.C. Handy Award (now known as the Blues Music Award) for “Best New Artist Debut.” In 2008, Curran performed four songs on the mega-hit HBO series “True Blood.” All Music Guide called him “one of the most authentic and exciting roots musicians of his generation.” 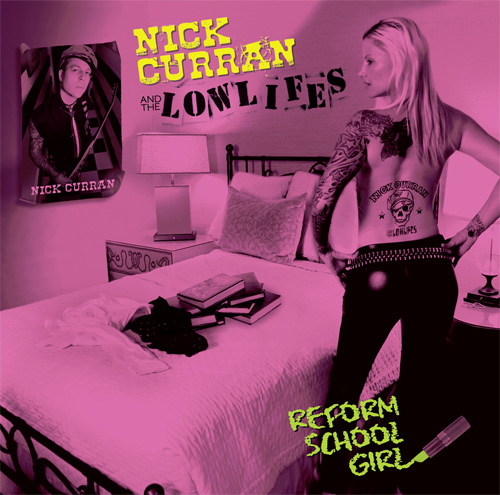 There’s nothing more refreshing than a tall glass of rock and roll – and Nick Curran serves up a potent concoction of music elixir on his new album ‘Reform School Girl,’ out Feb 16 on Eclecto Groove Records.

Check out how Nick describes his sound below, turn your blender up to 11 and drink up.

Put all ingredients into a high powered blender and turn it all the way up! Blend to a delicious cocktail and drink as fast as possible!!!

Nick Curran describes his music as a cocktail consisting of the sounds of no less than seventeen widely differing musicians blended together with a cup of broken glass. That only begins to characterize the wallop packed by the 98-proof elixir of this singer, songwriter and monster guitarist who effortlessly carries the past with him as he blazes across the musical landscape in perpetual forward motion. Curran began his professional career at age nineteen, leaving Maine to tour with Ronnie Dawson. Although Dawson was primarily a rockabilly musician, many blues and punk fans appreciated his performances. He taught Curran not to get pigeonholed. Curran toured next with Texas rockabilly doyenne Kim Lenz, moving to Dallas to join her backup band the Jaguars for two years, and performing on Lenz’s recording, “The One And Only.” Nick would stay with the Jaguars for two years. He is also featured on Lenz’s latest CD, “It’s All True,” and recently toured with her in the summer of 2009.

In 1999 the Texas Jamboree label issued Curran’s debut solo recording, “Fixin’ Your Head.” As he would do on all future CDs, Curran used vintage recording equipment to achieve the feel and sound of old 45s and 78s, and the LPs of the 1950s. To support the recording he formed the band, Nick Curran and the Nitelifes, whose performances whipped audiences to frenzied devotion with their wild ride of retro, yet fresh and edgy rock ‘n’ roll, boogie, R&B, jump blues and a variety of other tasty stylistic devils in the details. A second Texas Jamboree CD, “Nitelife Boogie,” followed in 2001. When Curran moved to Austin, Jimmie Vaughan, who had heard his CDs, invited him to sit in on a set at Antone’s. Vaughan would make a guest appearance on two tracks on Nick’s next recording, “Dr. Velvet,” which garnered the 2004 W.C. Handy Award (now the Blues Music Award) for &qu! ot;Best New Artist Debut.”

From 2004 to 2007 Curran displayed his talents with The Fabulous Thunderbirds, Kim Wilson’s legendary band, appearing on their 2005 recording, “Painted On.” Also during that time, Curran and bassist Ronnie James started the punk band Deguello, saying that it “sounded as if Little Richard sang with The Ramones.” After performing a solo show in November, 2008, Nick was inspired to form the rock ‘n’ roll roots band, The Lowlifes. “Reform School Girl” is a culmination of Curran’s multitude of talents: a throwback to his roots, only amped up to the limit. “I’ve written more songs on ‘Reform School Girl’ than on any other record. I wanted it to have no filler – only good stuff. All my influences are there, from old blues like Lazy Lester and T-Bone Walker to girl groups like The Ronettes and The Shangri-Las, to Guns N Roses.” The album also features a couple of appear! ances by some of Nick’s close personal friends including a duet on the song “Flyin’ Blind,” co-written with Blasters’ frontman Phil Alvin, as well as harmonica ace Jason Ricci on “Reel Rock Party.” Catch Nick Curran as he shakes, rattles and rolls a head-spinning combination of genres and tunes into a cool, irresistible cocktail that is rough and ready for action.