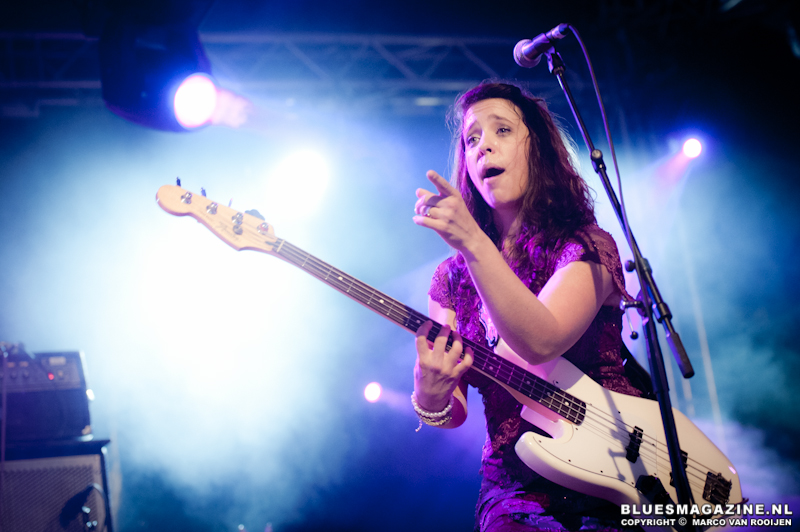 From the first notes of singer-bass player Danielle Nicole’s new album, Wolf Den, one truth becomes self-evident: This girl oozes groove. There’s so much funky, bluesy soul coming out of her, you wonder if her heart beats in syncopated time.

The Kansas City-raised daughter of musicians already had a solid blues foundation, but she found that groove — or new variations of it — in New Orleans, where she worked with GRAMMY®-winning producer-guitarist Anders Osborne to craft her solo debut for Concord Records, set for release on September 25th, 2015.

Having toured the world with her brothers, Nick and Kris Schnebelen, in the sibling band Trampled Under Foot, Nicole was well aware of the Crescent City’s formidable musical mojo. She had no idea she could fall so deeply under its spell, however, until she hooked up with the perfect shaman.

“He’s through and through New Orleans, and he really threw me heavily into the culture,” says Nicole of Osborne. “There’s such a history that you can feel…such an old beauty to it. Being down there was really inspirational and it added a lot more imagery to the songs.”

You can hear and feel that Big Easy influence snaking through each of these 12 tracks, from the tasty jazz-blues licks of “It Ain’t You” to the chunky Voodoo-Chile crunch of the rocker “Didn’t Do You No Good.” The funk gets particularly delectable in “How You Gonna Do Me Like That,” “You Only Need Me When You’re Down” and “In My Dreams,” which showcase Nicole’s versatility and range with nods to gospel and girl-group pop as well. (“Take It All” shows further appreciation of that genre; it’s one more example of Nicole’s willingness to both pay homage to and build on what came before.)

She’s equally fine with the torch-song nuances of “Just Give Me Tonight,” which soars into a downright dramatic showstopper before she brings it back down to earth. The slinky “Easing into the Night” is another charmer in an album so full of them, trying to pick favorites becomes an exercise in indecision.

Nicole calls the sound “blues-based roots,” and it’s clear those roots reach deep — straight to the melting-pot heart of American music. She discovered them early, thanks to her parents and big-band singer grandmother. When Nicole’s father heard her belting out Koko Taylor’s “Never Trust a Man” at age 12, her destiny was clear.

Influenced by artists as diverse as Etta James, Bonnie Raitt, Paul McCartney, the Neville Brothers, Sarah Vaughan and Janis Joplin (the latter of whom she recalls, “…a white girl playin’ the blues; I could relate…”), Nicole started gigging at 14 and picked up the bass at 18, when she and her brothers decided to join forces as Trampled Under Foot. As that band wound down after 13 years, Nicole formed her own band — that’s her regular keyboardist, Mike “Shinetop” Sedovic, tapping the black-and-whites on Wolf Den.

Because of co-architects Moore and Osborne, she says, “The album’s got a great southern feel to it, without even trying.”

Finding a different feel — or at least, stepping outside of her blues-rock comfort zone — was the point. That’s why she agreed to work with a new producer in a new environment. “The beauty of home and what you know is that you can always come back to it if you want,” she notes. “But you should explore.”

And so she did, finding inspiration amid lush, mossy greenery, humidity-dampened air and charming French-Quarter streets. Further inspiration came just from watching Osborne, whom she describes as “a mad scientist.” They share writing credit on six tracks; Nicole also sings Osborne’s “It Ain’t You.”

“He’s real serious. He’d look at these lyrics and just lay down on the floor with his acoustic and his feet propped up on a chair and just start playing chords, and just come up with these beautiful, beautiful arrangements,” she says. “There were songs that I would just say, ‘Here’s how they go; it’s missing a bridge,’ and then there were a few where he’s just there on the floor, writing beautiful progressions. I’d just sit there quietly, Indian-style, barefoot with Anders in his living room, watching him writing tunes, with my jaw open.”

Remarkably, they did most of the writing in a three-day session, and recorded the entire album in six days at Esplanade Studios, a former church filled with natural light — and plenty of vibe. She’s thrilled with the results.

“We really went outside of the box as far as what people are used to me doing,” she says. “But there’s still a real sense of familiarity, and there’s some really good groovin’ blues on there. It’s a way for me to branch out and still stay true to home, throughout the whole record. And it’s really cool the way the songs tie together, but they’re individual, too.”

Though she says she’d love to spend more time in New Orleans and work with Osborne again, Nicole assures she has no plans to leave her beloved hometown, except when it’s time to venture out for shows and festival performances.

“People move to LA and New York to make it big and be famous. I just like to tour the music and play the blues,” she says. “I’d love to have a hit and I write my music with honesty and the full intention of being the best that I can, but I’m not looking for the million-dollar house in the hills. I’m not looking to be a pop princess.”

“That’s what I love about the roots genre: You can have longevity and you can make a decent living at it. And you can explore so many other lanes of music,” she explains.

Yes, you can travel wherever the groove takes you. And with talent like hers, that could be any direction she wants.

Video: On the road with Mariëlla Tirotto & The Blues Federation