Luther Dickinson enters a new phase of his storied musical career with his rollicking and raw new solo album, Rock ‘n Roll Blues. From the propulsive beat and unbridled sound of opener Vandalize, to the insanely catchy Bar Band, it’s clear this is a unique chapter in the acclaimed Southern musician’s songbook. More informed by a youth spent listening to punk rock than the blues and boogie rock of his revered band North Mississippi Allstars, the record consists mostly of acoustic guitar, stand up bass and drums and although not punk in sound, it is in spirit and the DIY ethos. In essence, an autobiography set to music, the 10-track LP traces Luther’s journey from excitable teen to tour-van vet and offers a side of himself seldom seen before.

The son of the late great producer and musician Jim Dickinson, Luther made his recording debut at age 14 and has recorded with a who’s who of musicians including The Replacements, Beck, Jon Spencer, John Hiatt, Levon Helm, Mavis Staples, Ry Cooder and Patty Griffin. He is the lead guitarist and vocalist for the North Mississippi Allstars and widely known as both a talented musician and producer with four Grammy® nominations to prove it – three in the contemporary blues category and one in traditional folk.

Luther initially wrote “Vandalize” — as well as several of the songs on Rock ‘N Roll Blues — many years ago, but they didn’t find a home until now. “When I was a kid, that song was an atonal punk-rock track with
a hip-hop break,” he explains. “These songs didn’t fit onto my past records, but they all fit together. When I realized they told the story of a guy growing into a life in music, it really did make sense as a song cycle and as a solo record.”

One last important note on “Vandalize”: It’s Luther’s four-year-old daughter’s favorite song. “That’s why it’s first on the record, because she makes us listen to it over and over. She says, ‘It just makes me go crazy in my car seat!’ And she laughs hysterically. That’s how I knew I’d succeeded in capturing that youthful feeling of music and life making you feel crazy.”

When Luther Dickinson was growing up in rural Mississippi — just 40 miles south of Memphis, but deep in the hill country — his favorite band was Black Flag, the caustic L.A. punk band that defined the
hardcore movement in the 1980s. That may surprise listeners who have been following his career as a folk-blues-rock innovator. With his brother Cody, Luther is a charter member of the North Mississippi Allstars and has recorded with an amazing array of musicians over the years: Beck, Patty Griffin, Mavis Staples, John Hiatt, Buddy Miller, RL Burnside, Lucero, Jon Spencer, and Robert Plant. He’s also produced albums by Jim Lauderdale, Amy LaVere, and Otha Turner, whose Everybody’s Hollerin’ Goat was named one of the top 10 blues records of the ‘90s by Rolling Stone.

Part of Black Flag’s appeal, of course, was that Luther’s parents just didn’t get it. That’s a good enough reason for a rowdy teenage boy to connect with any band, but it’s especially significant given that Luther’s dad is Memphis maverick Jim Dickinson, who had played with the Stones and Aretha Franklin and had produced landmark albums for Big Star, the Replacements, and Ry Cooder. In 1987, Jim even recruited his 14-year-old son to play guitar on the Mats’ album Pleased to Meet Me. “He didn’t understand Black Flag musically,” recalls Luther with a sharp laugh. “I had found my own music that alienated my rock ‘n roll parents!”

The downside, of course, was that Black Flag rarely played around North Mississippi, and when they did, they never played all-ages shows. It wasn’t until Luther was in seventh grade that he finally saw his heroes play live — at an in-store at Peaches Records in Memphis. It was an amazing experience for the adolescent. And for his dad, too. “When he saw them, he was like, ‘I get it now. It’s like Captain Beefheart and Ornette Coleman meet the Sex Pistols.’ Okay, Dad. Whatever it takes.”

That instance of father-son bonding via abrasive SoCal punk rock informs Luther’s latest album, which is actually his third solo album following recent collections of primitive folk guitar and acoustic gospel. Rock ‘n Roll Blues is not punk like Black Flag, but it does maintain a similarly hardcore DIY ethos. On opener “Vandalize,” he recounts that formative show in the third verse:

There were no all age shows in my day
For free and instrumental was how they played
In a record store, free for the kids…

I got so excited, had to vandalize

“Vandalize” serves as a prologue to an album that is, in essence, an autobiography set to music, tracing Luther’s journey from excitable teen to tour-van vet. He may have innovated blues and boogie rock, but Luther started out as a confused teenager — just like the rest of us. With its rambunctious acoustic strut and barbed chorus hook, “Bar Band” relives his dues-paying youth playing battles of the band and plastering Memphis with concert flyers, while “Blood ‘n Guts” chronicles the transience of a life spent in a van driving from one gig to the next, the steady drums marking the miles along some deserted highway. 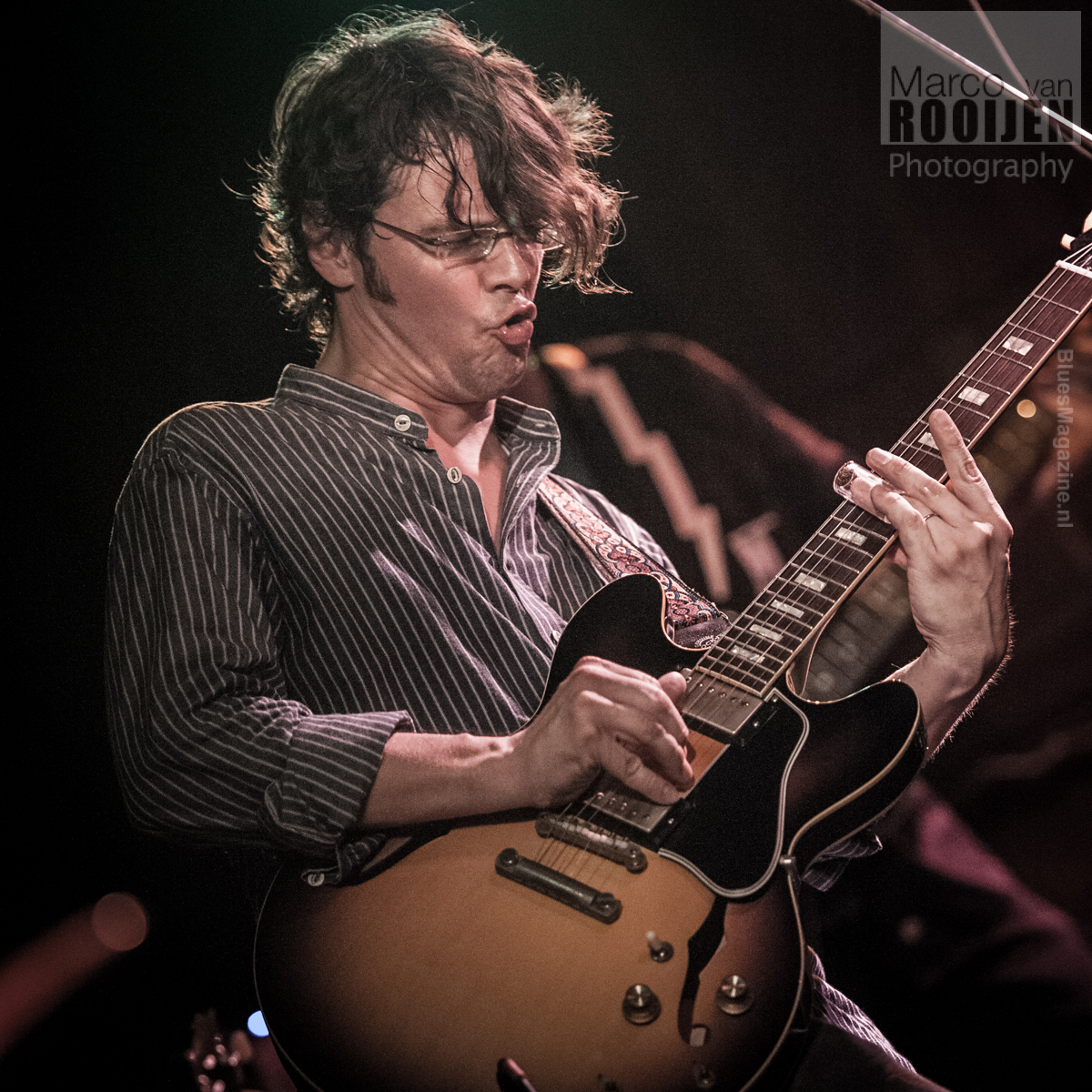 Recorded in just a few days at Zebra Ranch, the Dickinson family home studio, these songs evoke constant struggle: to find the right chords and the right words, to balance van life with home life, to provide for his family financially as well as emotionally. Not that Luther is complaining. No woe-is-me gripe session, Rock ‘n Roll Blues sounds like a celebration of music’s regenerative effects on the human soul. As he sings on closer “Karmic Debt”:

Every night lost in the sound
Sailing my way back, homeward bound
If this ol’ world is surely round
Eventually I’ll hit solid ground

Rock ‘n Roll Blues reveals Luther to be not simply a superb guitar player, but also an acutely observant songwriter. Songs like the bittersweet reminiscence “Some Ol’ Day” and the tragicomic “Goin’ Country” portray an artist striving to honor the musical traditions of his family and his home city while struggling to find and develop his own voice. “These songs didn’t fit onto my past records,” Luther says, “but they all fit together. When I realized they told the story of a guy growing into a life in music, it really did make sense as a song cycle and as a solo record.”

Luther has been living with some of these songs for half his life. “Vandalize” was written before he could legally drink and recorded several times. “When I was a kid, that song was an atonal punk-rock track with a hip-hop break,” he admits. Other songs he recorded with a full band and electric guitars, but they all sounded either overblown or undercooked. To get them right, Luther had to unplug and pare down—way, way down. “I tried to get everything down to the barest essentials—acoustic guitar, stand-up bass, drums, vocals—and let the songs speak for themselves.”

More in line with the South Memphis String Band records or his two Grammy-nominated solo albums than with the North Mississippi Allstars, Rock ‘n Roll Blues is “folk music with juke-joint drums and lots of harmonies,” which means the rhythm section has to be both propulsive and supple, confident yet restrained. According to Luther, these songs finally came alive when he brought in bass player Amy LaVere and drummer Sharde Thomas. LaVere is a celebrated Memphis actress/singer-songwriter with three excellent albums under her name, two of which were produced by Jim Dickinson. Her upcoming fourth album was produced by Luther.

Thomas is the granddaughter of the late great blues fife player Otha Turner (that’s his cane fife she’s playing on “Mojo, Mojo”). “Sharde and I have been playing together at Otha’s picnics for years, since she was a little girl,” Luther says. “Her groove is so earthy, and Amy can play one note and groove so hard on that,” says Luther. “They create such a lovely bed of rhythm for these songs.”

Recensie: Luther Dickinson And Sisters Of The Strawberry Moon – Solstice

Luther Dickinson And Sisters Of The Strawberry Moon – Solstice