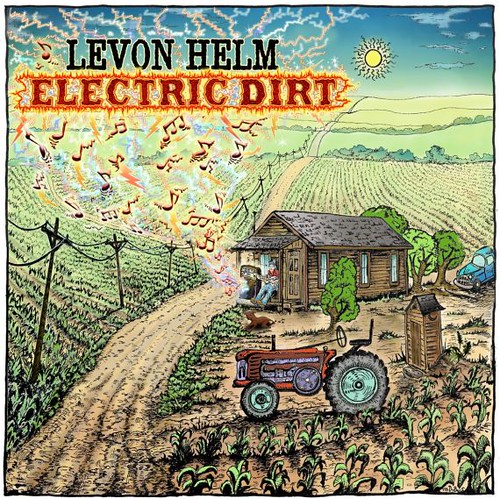 “Electric Dirt” again finds Levon steeped in tradition, in his connection to the land and those who live by it. At the same time, he paints a broader musical canvas by incorporating gospel, blues and soul into a wide range of original compositions and eclectic cover songs. “Our objective here was to take the honesty, innocence and purity of the “Dirt Farmer” record, which represents a true element of what Levon is all about, but also expand on that and explore deeper the gold mine of Levon’s musical artistry,” said Campbell.

“Electric Dirt” starts with a rousing rendition of The Grateful Dead’s “Tennessee Jed,” moving on to a beautiful, stripped-down version of Happy Traum’s “Golden Bird.” “Growing Trade,” written by Levon Helm and Larry Campbell, tells a heartfelt story of a farmer’s struggle to preserve his livelihood. The rousing horn arrangements by Allen Toussaint and the Levon Helm Band on “Kingfish,” written by Randy Newman, brings the swagger of New Orleans to the forefront.

In 2007, after overcoming seemingly insurmountable odds, Levon released “Dirt Farmer”, his first solo recording in twenty five years, which went on to win a Grammy for “Best Traditional Folk Album.” The San Francisco Chronicle said, “This album is nothing less than a return to form by one of the most soulful vocalists in rock history.” Rolling Stone went on further to hail Levon Helm’s Midnight Ramble as “2008’s Best Jam Session” and the same year, Levon received the “Artist of the Year” award from the Americana Music Association.