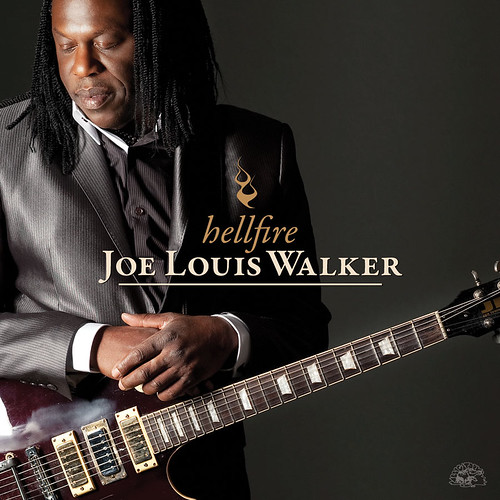 Alligator Records has set a January 31, 2012 release date for Hellfire, the label debut from Joe Louis Walker. The award-winning guitar slinger, passionate vocalist and gifted songwriter has been releasing groundbreaking music since 1986 and has toured — and continues to tour — worldwide. The New York Times raves, “Walker is a singer with a Cadillac of a voice. He delivers no-nonsense, gutsy blues. His guitar solos are fast, wiry and incisive, moaning with bluesy despair.” Rolling Stone simply calls him “ferocious.”

Walker’s discography includes 23 albums and two DVDs. He has won four Blues Music Awards, including the 2010 Album Of The Year Award for Between A Rock And A Hard Place (Stony Plain Records), and has been nominated for 43 more. Walker’s also recorded as a guest with some of the blues world’s best-known artists, including appearances on Grammy-winning records by B.B. King and James Cotton.

Hellfire was produced by songwriter/drummer Tom Hambridge (producer of Buddy Guy’s two most recent Grammy-winning CDs, Skin Deep and Living Proof, as well as albums for Susan Tedeschi, George Thorogood and others). Walker, who wrote or co-wrote seven of the CD’s eleven tracks, says it’s the hardest rocking and most deeply soulful album of his career. His blistering blues guitar playing and gospel-tinged vocals effortlessly blend throughout the album. The psychedelic overtones of the title track (a harrowing and personal tale of the struggle of good versus evil) give way to the slow, simmering and pleading What’s It Worth? and full-force rock of the Stones-y Ride All Night. Walker’s original showstopper Soldier For Jesus (featuring vocal harmonies from The Jordanaires, who also appear on Don’t Cry) fits seamlessly alongside the other selections, making perfect thematic sense in the tra! dition of Al Green, Marvin Gaye or Prince, who all successfully combined carnal desires and gospel devotion.