Beth Hart joins Bonamassa for the soulful duets I’ll Take Care of You and Sinner’s Prayer, taken from the recently released Don’t Explain album – a collection of soul covers the pair recorded together. John Hiatt, a Nashville Music Lifetime Achievement Award recipient and American Music Award (AMA) winner, joins Bonamassa for renditions of Down Around My Place and I Know A Place. Legendary rock singer Paul Rodgers (Bad Company, Free) joins Bonamassa to perform Fire And Water and Walk In My Shadows. 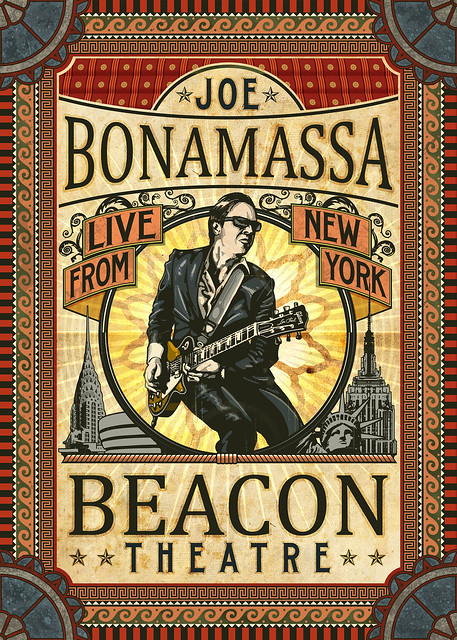 Alongside the great chemistry he shares with his formidable band-mates Carmine Rojas(bass), Tal Bergman (drums) and Rick Melick (keyboards), the Beacon Theatre concert DVD is mesmerizing to watch from start to finish.

Bonamassa kicks the festivities off with Slow Train, from 2011’s solo album Dust Bowl, followed by fan-favourites including Cradle Song, Dust Bowl, When The Fire Hits The Sea, Bird On A Wire, Blue & Evil, Mountain Time, and many more.

Beth Hart joins Bonamassa on stage for soulful duets on I’ll Take Care of You and Sinner’s Prayer, which is featured on the recently released Don’t Explain – an album of soul covers Hart recorded with Bonamassa.

John Hiatt, a Nashville Music Lifetime Achievement Award recipient and American Music Award (AMA) winner, joins Bonamassa for a rendition of Down Around My Place and I Know A Place.

As legendary classic rock singer Paul Rodgers (Bad Company, Free) hit the stage, the audience jumped to its feet as Bonamassa performed Fire And Water and Walk In My Shadows.

“This show is a testament to an artist at the top of his game, and still growing,” says Bonamassa’s producer Kevin Shirley. “Soulful songstress Beth Hart digs deep on a couple of songs with Joe from their duet album, and music legends John Hiatt and Paul Rodgers get up alongside Joe. The interactions are a joy to behold.”

The Beacon Theatre concert capped a year of achievements for Bonamassa the blues rock titan. His 12th solo album Dust Bowl debuted at #1 on Billboard’s Blues Chart and #37 on Billboard’s Top 200, making it his highest-selling and chart-ranking U.S. debut to date. Likewise in the UK it charted at # 12, achieving his highest chart position here. The album has just been nominated for a 2012 Blues Music Award (Best Blues Rock Album), while Bonamassa was honoured as 2011’s Guitarist of the Year by Guitar International. This January Joe was on the cover of Classic Rock magazine for the first time, creating a big impact outside of the blues genre.

Bonamassa is driving sales for the guitar industry and keeping the guitar alive, helping great companies like Guitar Center, Gibson, Epiphone, Ernie Ball, Dunlop, Seymour Duncan, Clear Sonic and Klotz Cables, all of whom have signature products with the Guitar phenomenon. Bonamassa’s style of guitar playing has breathed new life and excitement back into the instrument as legions of new fans are becoming familiar again with the great sound of guitar-based rock music.