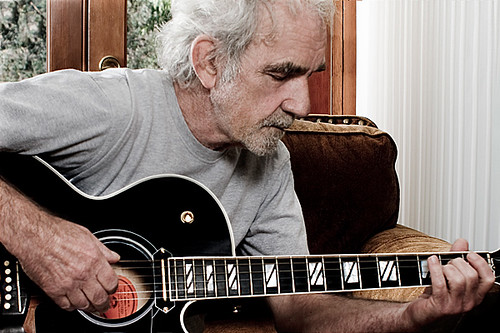 J.J. Cale – “One Of The Masters” – Readies ‘Roll On,’ His Rounder Records Debut And First Solo Album In Nearly Five Years, For Feb 24 Release

On February 24, Rounder Records will release JJ Cale’s ‘Roll On,’ the legendary songwriter and guitarist’s first solo album in nearly five years, and his debut for the label. ‘Roll On’ follows Cale’s Grammy-winning, gold-certified 2006 album with Eric Clapton ‘The Road to Escondido.’

Cale wrote and produced all twelve songs on ‘Roll On,’ and plays all the instruments on most of the tunes as well, including guitars, pedal steel, bass, drums, piano and synthesizers. He tracked most of the album at his home studio in California. Among the few exceptions is the title track to ‘Roll On,’ a previously unreleased collaboration with Eric Clapton, and the latest evidence of the pair’s incredibly fruitful, simpatico creative partnership.

Elsewhere, Cale adds a few curveballs – like the scat-sung opener “Who Knew” and the jazz chords of “Former Me.” – to his mesmerizing mix of blues, country, rock and other quintessentially American styles. The album is such a treat to the ears it’s easy to overlook the amount of work that goes into creating Cale’s signature “laid back” sound. He played most of the instruments on his landmark first album ‘Naturally’ out of financial necessity. He does so on ‘Roll On’ out of a passionate, meticulous love of the craft.

Eric Clapton recognized that passion a long time ago. Two of his biggest hits as a solo artist – “After Midnight” and “Cocaine” – are Cale-penned songs. Other artists who’ve covered Cale include Johnny Cash, The Band, Chet Atkins, Captain Beefheart, Santana, The Allman Brothers, and Lynyrd Skynyrd; while Mark Knopfler, Neil Young, and Bryan Ferry have all cited his influence. “He’s a superior musician,” says Clapton. “One of the masters.”

J.J. Cale – Breezin At The Cafe