The blues will be celebrated along historic Beale Street this January as part of The Blues Foundation’s 2020 International Blues Challenge Week, which takes place in Memphis, Tenn. from Tuesday, January 28 through Saturday, February 1. The Blues Foundation kicks off the festivities on January 28 with performances happening in 21 different venues along historic Beale Street straight through to the Finals on February 1 at Memphis’ Orpheum Theatre (203 S. Main St.) at 12 noon. The International Blues Challenge, the world’s largest and most renowned blues music competition, attracts more than 800 musicians to Memphis from all across the globe to battle for glory, bookings, and prizes. Besides the challenger performances which are the heart of the IBC, Beale Street will be packed with themed showcases, youth workshops, jams, parties, and master classes occurring day and night.

During IBC Week, notable events happen every day. The Blues Hall of Fame (421 S. Main St.)hosts a trio of special events on Wednesday, January 29. Multiple Blues Music Award winner and GRAMMY® nominee Janiva Magness will conduct a reading, Q & A, and book signing of her new autobiography Weeds Like Us at 12 noon. At 2 p.m., the “Music Across Borders” panel discussion will explore why the blues has garnered such a large international following and how artists and their music can expand their reach outside of their home countries. Presented by the Consulate General of Canada, the panel will be moderated by Leigh Shockey and will include Canadian blues music artist Shakura S’Aida, founder and president of Intrepid Artists Rick Booth, president of Music Marketing International Bruce Morel, and producer of the Cahors Blues Festival Robert Mauries. The Blues Hall of Fame celebrates the opening of its new “Women of the Blues” exhibit at 3:15 pm. Curated by photographer/journalist Lynn Orman Weiss, the captivating display spotlights works from a wide range of blues photographers and features images of blues women from all ages and backgrounds who represent styles ranging from Southern soul blues to Chicago blues and blues rock.

Complementing “Women of the Blues” is IBC’s keynote panel, “Blues Women – Creators, Conductors, and Catalysts,” which takes place Friday, January 31 at 2:30 pm at Alfred’s on Beale (197 Beale Street). Moderated by author Dr. Marie Trout (The Blues: Why It Still Hurts So Good), a panel composed of Multiple Blues Music Award winning and GRAMMY® nominated Shemekia Copeland, BMA-winning blues musician/educator/activist Gaye Adegbalola, award-winning media consultant and founder of the African American Public Relations Collective Gwendolyn Quinn, and BMA and GRAMMY® winning producer and co-founder of Omnivore Recordings Cheryl Pawelski will discuss the tremendous influence women have had on the blues genre, both as performers and as behind the scenes industry leaders. 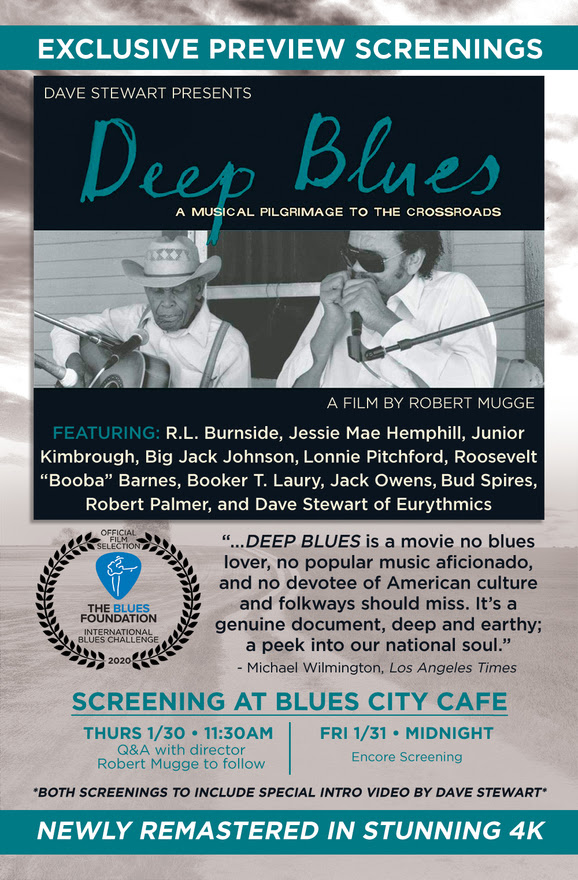 Thursday, January 30 features the premiere of a newly remastered, 4K edition of the landmark documentary Deep Blues: A Musical Pilgrimage to the Crossroads. Made by music critic and author Robert Palmer and documentary film maker Robert Mugge, in collaboration with David A. Stewart and his brother John J. Stewart, this 1991 movie chronicles the world of Delta blues and North Mississippi hill-country blues, with filming in Memphis as well. The Los Angeles Times hailed Deep Blues as a “movie no blues lover, no popular music aficionado, and no devotee of American culture and folkways should miss. It’s a genuine document, deep and earthy; a peek into our national soul.” At the 11:30 a.m. screening, at Blues City Café (138 Beale Street), Stewart will give a video intro and Mugge will participate in a post-screening Q&A. (Blues City Café also hosts a midnight showing on Friday night, January 31.)

A unique musicians’ workshop, “Leading Your Own Career with Bobby Rush,” also is happening January 30. The Blues Hall of Famer, multiple Blues Music Award winner, and GRAMMY® winner will share distinctive insights on how to protect one’s brand as a performing blues musician, as well as tell stories from his own illustrious career. The workshop, which also includes an audience Q&A, will be held at King’s Palace (162 Beale Street) starting at 12:30 pm.

The nine Keeping the Blues Alive Award recipients will be recognized for their life-long achievements at the KBA brunch on Friday, January 31 at 10:30 a.m. in the Holiday Inn Memphis-Downtown Ballroom (160 Union Avenue). Chosen by a select panel of blues professionals, the honorees not only hail from across America, but also Canada, Denmark, Poland, and Colombia.

During IBC Week, The Blues Foundation will again host health screenings for diabetes, cholesterol, elevated PSA, Hepatitis C and more, all offered free of charge to IBC musicians and attendees. This year, for the first time, private and confidential onsite behavioral health consultations with psychiatrist Rebecca Dulit, MD will be available to attendees. Sponsored by The Blues Foundation’s HART (Handy Artist Relief Trust) Fund, these screenings will be provided on Wednesday, January 29 and Thursday, January 30 from noon-2:30 p.m. on the second floor of Club 152 (152 Beale Street).

For more information about the International Blues Challenge, including the full schedule of events, IBC merchandise, and links to reserve discounted hotel rooms in Downtown Memphis, please visit: https://blues.org/international-blues-challenge/

Blues Hall of Fame events are free and open to the public. All activities on Beale Street require an International Blues Challenge pass for entry. To purchase an IBC Pass and final seating upgrades, along with tickets to the Keeping the Blues Alive Awards Brunch and Ceremony, please visit this link: IBC and KBA TICKETS AND UPGRADES LINK

Blues Foundation announces Int’l. Blues Challenge winners, plus other highlights of the week in Memphis