“Head, Hands and Feet”, a book of one-man bands by Dave Harris 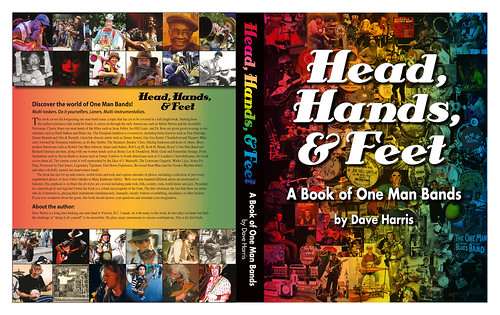 Dave Harris
Up in Victoria on Vancouver Island in British Columbia, Canada, there is a wily busker keeping the old traditional folk blues flames burning. Busking, as you should know, is a noble, ancient profession dating back to the formation of the first cities. In the Middle Ages more musicians played on the streets than in the pubs or castles, and folk musicians have played the market squares since the beginning of time. Tip your hat to the music man and tip his hat, while you are at it. Dave Harris is a one fiery band – not just that, but you can call him the supreme musicologist of one-man bands. He may be the first to have written the book on the subject as he is just about to release “Head, Hands and Feet” a book of one-man bands. Follow the bard for news on this because global lovers of blues & roots music will find an unusual goldmine in that soon to be published book.


When he was just twenty years old, and had left his Toronto home, Dave Harris must have read and heeded Poor Richard’s Almanack’s wisdom “Doors and walls are fools’ paper.” He opted for the freedom of the great outdoors to bring the music to the people where the people are. Harris is an interesting guy, a professional busker who has emancipated himself from the bad part of the music business. No booking agent, no manager, no club owners to hassle with. He has a regular spot and has been there for 35 years, so he is a musical fixture on the inner harbor of the island, a regular tourist attraction in his own right. He admitted, “I am not so good at selling myself. Busking is a good way for to get to the people.” Plus, he has no commute, which is a good thing because he does not drive (never has) but he has a record collection of 10,000 albums. So there! In the permissible weather season from Easter to Mid-October, you can catch Dave Harris playing 6 and 12 string guitar, National and Regal metal bodied resonators, rack harmonica, fiddle, a Pete Farmer foot drum and the fotdella. OK, a fotdella now what is that, you wonder. It’s basically a foot-pedal operated bass. Look at a piano hammer and enlarge it for your foot against what looks like a bass drum. It was invented by Jesse Fuller, who was one of the all-time most important one-man bands.

In the winter when it is too cold to play outside, Harris does indoor gigs with local bands playing whatever. “To be a good busker you have to be able to read the audience, to find out what they like. It always changes,” says the bard. Dave Harris has learned a thing or two about gigging on the street. He brings music to the people that they otherwise may not have heard– Leadbelly, Jesse Fuller, Henry Thomas, Jimmy Reed, Robert Johnson, all that old folk blues and one-man band blues music. He plays slide and fingerpicks, fiddles in the middle and switches over to harp on the fly at a great penny’s worth. A virtual musical treasure, Dave Harris is a sheer musical delight, putting a powerfully big show and the people can pay what they owe or keep on walking – that, of course, would really be the busker’s true Walking Blues.

Thankfully, the authorities in Victoria are not only supportive, but they realize that street music is culture for the people which enhances a community, is good for tourism and a wonderful way to lively up a waterfront. Many US communities should learn from that example because often they chase away buskers as if they were panhandlers, which belittles an honorable profession and cheats the people who cannot afford expensive club music out of a chance o get turned on to a delightful live music.

Not to over-romanticize his gig. He works hard at it, it’s a job busking 5 to 6 hours a day when the weather allows. That’s a tough regimen on the fingers! This ain’t no nine-to-five life, baby. This is the life Muddy Water sang about when he went “I live the life I love and I love the life I live.” There is a whole lot to this guy. Deep musical substance, serious musicological knowledge and more personal freedom than most anyone– and he managed to make a living at it for 35 years. Did I forget to say, “Fun!”

To get CDs or the new book, contact the artist directly:
http://www.facebook.com/pages/Dave-Harris-One-Man-Band/240265520867

One Way Out: The Inside History of the Allman Brothers Band (Book)