The best musicians are masters of reinvention. Bob Dylan’s electric revolution at Newport Folk Festival. Radiohead’s bold rebirth with Kid A. Robert Plant’s fearless escape from the shadow of Led Zeppelin. To that list of trailblazers and rulebreakers, add Erja Lyytinen. For seventeen years, we’ve known her as the award-winning slide goddess whose heart-and-guts songs have shaken the blues-rock scene. But as the Finnish bandleader confirms with latest album Another World, we’ve only scratched the surface. “The album title is the idea of stepping into a new territory, musically and spiritually,” she explains. “Walking towards a new land of musical ideas, not being afraid to express myself. This album is open-minded, curious and empowering.”

In a cynical world where manufactured bands stick to the formula, Lyytinen has always broken through the boundaries of genre. This is an artist capable of flowing from the primal blues of international debut “Pilgrimage” (2005), to the orchestration of “Voracious Love” (2010) and the soulful Elmore James tributes of “The Sky Is Crying” (2014). But following the shattering breakup that fuelled “Stolen Hearts” (2017), Lyytinen found herself tearing out the page and writing a new chapter. “While Stolen Hearts was made during tough times,” she reflects, “Another World is like spring, bringing in new fresh life and hope. The whole album is rockier and funkier, with elements of blues, pop, hard-rock, prog-rock – one song even has an Irish vibe.”

Written, recorded, mixed and mastered across the planet by the greatest sonic architects on the modern scene, “Another World” feels like an album in motion. The songs passed through iconic locations including Gavin Lurssen’s Grammy-winning Lurssen Mastering in LA, while the thrilling mix was crafted by Austin, Texas legend Chris Bell, who recognised Lyytinen as a talent to match up to A-list clients like The Eagles, Erykah Badu and Eric Johnson. But Lyytinen’s soaring vocals and fire-in-fingers slide work mean these songs always feel like one vision, even with the track listing running the gamut of genres and moods. “Snake In The Grass” lays biting riffs on a stop-start groove, Lyytinen cutting heads with Michael Jackson’s favourite shredder, Jennifer Batten, on a harmony solo that “becomes a guitar battle”. 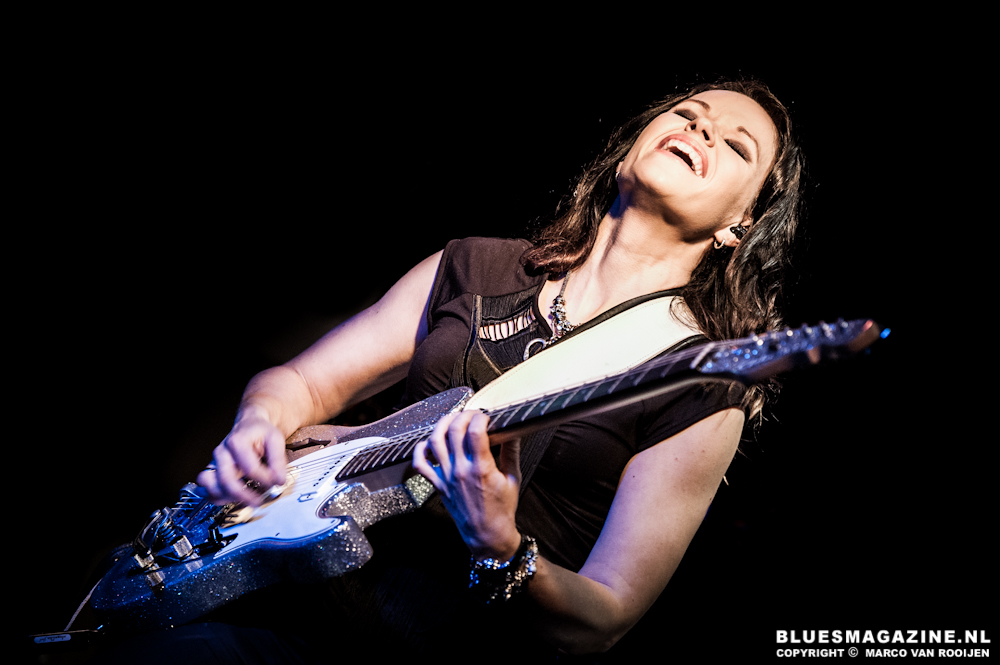 The title track weaves lyrical themes of survival, space exploration and divided lovers, its dreamy soundscape decorated with swooping harmonies and a virtuoso solo that races by like a comet. “Hard As Stone” is inspired by Lyytinen’s recent onstage cameo with the mighty Carlos Santana, tipping a hat to the Latin legend with its pulsing double-time percussion. “The song itself,” she explains, “tells about an oversensitive person having a hard time living in an otherwise loud society.”

“Wedding Day” takes a wry look at a romance-gone-wrong, Lyytinen and star guest Sonny Landreth stoking the song’s engine with shots of slide guitar. “Miracle” is a slow-burn beauty, the bandleader’s solo first played long and languid, then building to dizzy velocity. “My biggest achievement has definitely been the birth of my twins,” Lyytinen explains. “So, I tried to emulate the sound of babies crying with the guitar by using swelling with the tremolo bar, something Jeff Beck does a lot.”

There’s more to the glistening “Torn” than meets the eye: this album standout takes an influence from Sting with its tempo-shifting chorus, offers a Celtic vibe with Lyytinen’s first recorded foray on violin and offers a hand up to anyone left bloodied but unbowed by a bad relationship. “I see the story’s character standing on a battlefield,” she explains, “having survived the battle, wounded here and there, but picking up her shield, dusting it off and lifting her face towards the rising sun.”

Yet there are always more battles to come. Lyytinen sings with disarming honesty on “Break My Heart Gently”: a bruised ballad that will chime with anyone who’s endured the wrench of a breakup. And for anyone who missed recent single “Without You”, the digital album includes this bitter-sweet song as a bonus track, its choppy urban-soul groove setting up a stark guitar break that releases the tension. “It’s about a person,” she says, “who’s searching for a feeling she had with someone who’s no longer available. It’s dealing with the phenomenon of how the human mind obsesses about something or someone that is out of a person’s reach.”

But “Another World” isn’t an album that dwells on the past. This record is the freshest of starts, drawing a line in the sand under Erja Lyytinen’s stellar career so far and announcing that the next chapter will be truly unmissable. “This album is about deep stories, emotions and feelings after a breakup,” she says. “Going towards something new, discovering the new, and being courageous and naturally interested in the future. So, take a step into Another World with me…”