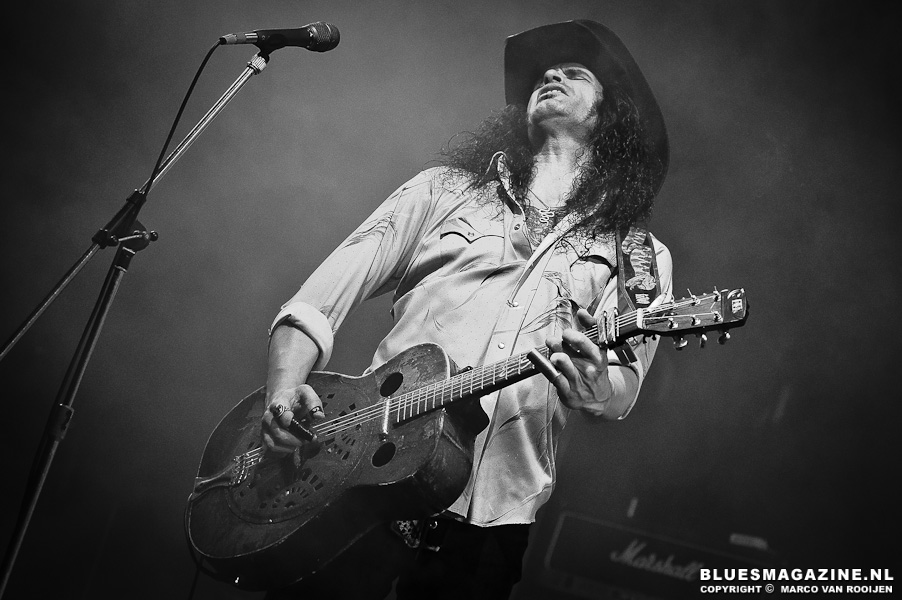 If you throw a boomerang the right way, it will come back. “And life is similar to this game with a boomerang – you sit there with a broken heart, and yet at the same time know it must go on, that you must move forward. You take a few steps forward and then a few back. That basically in some ways corresponds to the principle of a boomerang,” explains Eric Sardinas about the intention of the title of his Album, “Boomerang”. That’s what it’s about in the title song, but also in many of the other tracks that take on the topic in different facets and from different perspectives, and then come together and make a whole. Incidentally, the song was long under the working title “Comin’ and Goin’”, which very much expresses the intention of the new title.

“Boomerang” brought a whole new experience to the 1970’s born musician, who live in Los Angeles, when he is not somewhere in the world on tour. “We recorded the songs in between tours, not all at once, as we had always done before. There was no other way, we had no choice, because our schedule was so jam-packed in the past few years with performances all around the world. We couldn’t even clear a block of time in between for a few weeks, in order to retreat to the studio. On the other hand, it gave us the advantage to take our stage energy into the studio with us. It was all only possible though, because I wrote my songs on the road – when I come home, I have a pile of papers, napkins and other little snippets, on which I have kept my ideas and then at home I bring them all together. But that’s how I get plenty of inspiration, which expresses the reality of my fans, in which they can find themselves in. I don’t have to come up with grandiose lyrics, but rather can scoop them up from real life. And I am sure, that many song ideas came from Germany, where I have toured for many years.”

Releasing “Boomerang” 3 years after the release of their last album “Sticks & Stones”, Eric Sardinas and Big Motor are presenting their debut to the Freiburger Jazzhaus-Label. “That is one reason, why I have waited with my original release-idea. I had wanted to do four mini-releases with 5 songs each over the course of the year. But after discussing it with Jazzhaus, I decided to deliver a compact collection of 10 songs on one CD,” tells Sardinas as he lets us behind the scenes.

Nine of the tracks on “Boomerang” are his own creation, and he added one cover song. “Trouble” is taken from the vault of his great idol. “My first concert that I attended at a young age was one of Elvis Presley. He more than mesmerized me with his energy on stage – and his songs were simply awesome! And ‘Trouble’ was always one of my favorites,” he explains his decision. “In this way, I want to carry on his legacy!” However this song, like “Boomerang”, exemplifies Sardinas’ musical ambition. “I want to bring straight Rock n’ Roll and Blues together and mix them up into my own thing.” Although the manner of the work in the studio added to the composition: “We were all in a room playing together and then afterwards just added little bits and pieces to it. Matt ‘Groove’ Gruber is responsible for this creative type of recording, he also worked with us on the last album ‘Sticks & Stones’, he is just the right producer for us. He is a musician himself, and understands my concerns and just gets the best out of me, he pushes me to new limits.” Sardinas deliberately avoided renowned studio guests this time. Only Dave Shultz, who also played on “Sticks & Stones”, plays a piece on his Hammond organ. “I was lucky enough during my career both on the stage and in the studio, to have had the opportunity to play with some of Blues greatest musicians. Then those Titans of Blues are unfortunately gradually all dying and leaving us with their great legacy. But I wanted to really stay original and natural, somewhat similar to my first album, ‘Treat Me Right’. In a way, with ‘Boomerang’ I was going back to my roots. We once again recorded onto good old tape and not until later in the post production use the opportunity of today’s digital studio technology.”

Although it goes without saying, Sardinas has continued to play on his resonator and forgone the use of an electric guitar. “The Resonator, specifically my signature model that was built especially for me, offers so many possibilities of expression, that I pretty much have no need for special effects devices. I can just really have fun with this instrument and use it in so many ways and create such a power with it and get such sounds from it, that I can’t imagine playing on any other instrument.” Although he is also still flexible as he has shown on his recent European Tour. “At our departure from Los Angeles all of my guitars were gone – we couldn’t find them anywhere, they got lost somewhere between airlines and only two days after my return from Europe were they finally located. Luckily I have such loyal friends and fans, who brought me guitars to the shows for me to play on. That was quite the challenge, but also at the same time a great experience, that I wouldn’t want to have missed!”

A different experience, that he could have gone without was one that hindered the final work on “Boomerang”: “At one of the last European-Shows in Austria, I invited some people onto the stage for a jam session. It was pretty cramped onstage and as I was trying to make space my boot got hooked on the floor and I fell 2 meters off the stage and broke my leg. But it’s okay, I’ve just got to take it easy for a while so that I will be fit when it’s time to start touring again. And yes, I’m very lucky that my music is popular everywhere, that I have been able to break through with my music in Australia, Japan, Malaysia, Europe and North America – it isn’t always easy, to please all the fans with enough shows.”