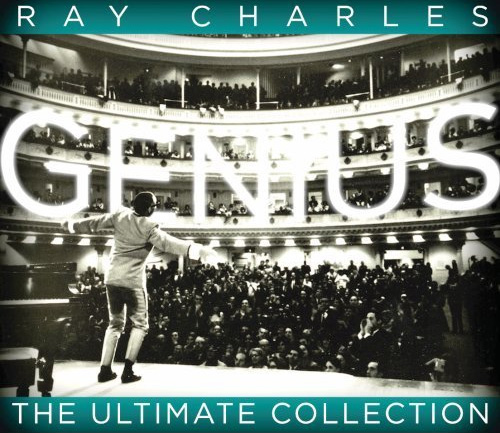 Commencing an extensive Ray Charles reissue program in 2009, Concord Records presents a 21-song anthology of hits titled Ray Charles — Genius: The Ultimate Ray Charles Collection. The volume compiles Charles’ most influential recordings for the Atlantic and ABC-Paramount labels including 1955’s “I Got a Woman” plus “Busted,” “Georgia on My Mind,” “Hit the Road Jack” and “I Can’t Stop Loving You,” concluding with his signature 1972 rendition of “America the Beautiful.” All are digitally remastered from the original tapes.

Ray Charles — Genius: The Ultimate Ray Charles Collection chronicles the high points in Charles’ catalog. As noted jazz writer Don Heckman writes in his liner notes, “The first feeling that comes to mind after even a short glance at the titles included here is a sense of wonder. The diversity of the material is impressive in its own right — blues, of course, transformed gospel songs, country tunes, an American Songbook standard, a Beatles classic and a climactic American anthem. But more than that, it’s what he does with all these variegated numbers. Good singers can do great interpretations. Great singers like Charles possess the material in a way that makes a song their own, while remaining true to the essence of each.”

The album contains 21 of Charles’ biggest hits, each within its own unique history and meaning. “Hit the Road Jack,” penned by Percy Mayfield, a #1 pop hit and a 1961 Grammy winner for Charles, opens the collection. Also included are “What I’d Say (Part 1),” ranked #10 in Rolling Stone’s 500 Greatest Songs of All Time; the classic “Busted”; “I Can’t Stop Loving You” from the album Modern Sounds in Country and Western Music, which reached #1 on R&B and pop charts; the Bobby Sharp composition “Unchain My Heart”; Charles’ signature rendition of Hoagy Carmichael’s “Georgia on My Mind, another #1 pop hit; “I Got a Woman” which was Charles’ first #1 R&B hit and was later sampled by Kanye West; “You Are My Sunshine,” the Jimmie Davis standard that Charles brought to #1 R&B a soulful edition of Hank Williams’ “Take These Chains From My Heart”; the offbeat “Hide Nor Hair”; Ashford & Simpson’s “Let’s Go Get Stoned,” a #1 R&B hit by Charles; “You Don’t Know Me,” earlier a hit for Jerry Vale, which charted #2 pop; “Hallelujah I Love Her So,” originally a gospel hymn; “Crying Time,” a Buck Owens song which Charles brought to #6 on the pop charts; the funky “I’m a Fool for You,” which charted #1 R&B “One Mint Julep,” Charles’ version of The Clovers’ hit with a big band arrangement by Quincy Jones; “Here We Go Again,” sung as a duet with Betty Carter; “Yesterday,” the Lennon/McCartney classic, in which Charles, according to Heckman, “embraces the song’s deep inner heart”; and finally his 1972 signature recording of “America the Beautiful,” the perfect ending and relevant once again.

Genius: The Ultimate Ray Charles Collection will be packaged in a handsome embossed digipack and presented with a 24-page collectors’ book of rare photos and Heckman’s notes.

Ray Charles will be “Forever” remembered in a postage stamp