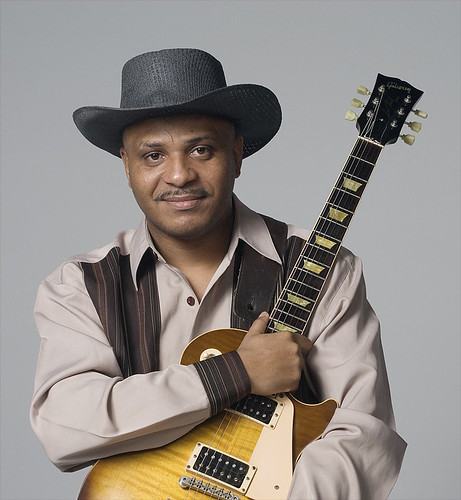 It is with immense regret that we inform you of the passing of Lil’ Dave Thompson at 7am this morning, February 14 2010, as the result of an automobile accident outside of Augusta, Georgia, while touring with his band. The other band members were not seriously injured. A dynamic artist, widely acknowledged as one of the very best of the current generation of Mississippi Blues Artists, Lil’ Dave will be sadly missed by his family, friends and blues music lovers world wide.

Blues guitarist David Thompson was killed on Interstate 20 after the van he was riding in overturned, Aiken County coroner Tim Carlton said Sunday.

A blues guitarist from Mississippi was killed on Interstate 20 after the van he was riding in overturned, Aiken County coroner Tim Carlton said Sunday.

David A. Thompson, 53, and his band were coming from Sullivan’s Island, S.C. after a performance there.

Thompson, who performed as Lil’ David Thompson, drew inspiration from the Mississippi Delta and recorded two CD’s, according to his website lildavethompson.com.

The driver of the group’s Ford van lost control on I-20 westbound near mile marker 26 around 6 a.m.. The vehicle went off the road into the shoulder, overturned and slid 500 feet and struck several trees.

Thompson was thrown from the front passenger seat of van and pronounced dead at the scene, Carlton said. No one in the van was wearing a seat belt, troopers told News 12.

The driver of the van and another passenger were not seriously hurt in the crash.

Highway patrol is still investigating the accident, but said they don’t believe weather or alcohol were factors in the crash. The death is Aiken County’s second fatal crash for 2010.