BILLY GIBSON – THE PRINCE OF BEALE STREET (US IMPORT)

Billy Gibson first picked up the harmonica at a very young age. “It was cheap and I could easily make sounds with it.” After high school, Gibson’s desire for learning and improving as a musician took him to Clarksdale, Mississippi, where he played with blues guitarist Johnnie Billington and drummer Bobby Little in Billington’s group The Midnighters. “Johnnie and Bobby taught me how to make it in this business,” Gibson recalls.

Like many before him, Gibson eventually left Mississippi for Memphis. “Beale Street was my university of blues,” recalls Gibson, referring to the lessons learned as a Beale Street performer. “For a young musician, all you have to do is look and listen and you can learn so much.” Gibson’s talent and commitment have not gone unrecognized. He received an endorsement from Hohner, his harmonica of choice in 1999. He has made guest appearances on national recording artists’ CDs including Deborah Coleman’s Soft Place To Fall (Blind Pig 2000) and Michael Burks’ I Smell Smoke (Alligator 2003). Around the same time, Gibson received a BA in music from the University of Memphis. Gibson’s career has been a constant progression and immersion into many genres of music, with blues being the foundation and primary inspiration of his artistic endeavours.

The DVD only contains six tracks, but Gibson seems to have the ability to turn every song into a blues marathon of sing-along, wicked harp solos, vocals, interaction with the audience. He’s constantly on the move on the stage, whether talking to fans in the front row, jumping ecstatically up and down to the music, or focusing intently on the harp with his back to the audience, Gibson is relentless.

Tracklist: Down Home, Keep Doin’ What Ya Doin’, Bad Boy, Funny How Time Slips Aways, Tell It Like It Is, Polk Salad Annie 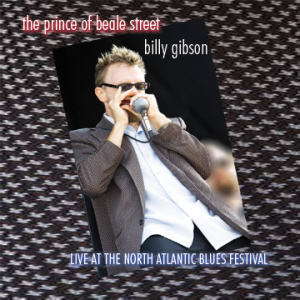 You can order this DVD in The Netherlands via www.bluesdvd.nl