Bill Wyman’s post-Rolling Stones work with The Rhythm Kings has been collected for a 5-disc box set that will be released on October 25.

This five-disc Collectors’ Edition Box Set, which gathers four studio albums Bill Wyman’s Rhythm Kings cranked out between their 1998 debut Struttin’ Our Stuff and 2001’s Double Bill, is a revelation, particularly for those who have yet to discover the rich body of work of Wyman’s low-profile/high-revving band. Given the expansive array of material the Rhythm Kings tackle in these recordings, one even might think of this collection as a pocket history of 20th century roots music, with original material written in the spirit of the old songs serving as the connective tissue.

A founding member of the Stones, and half of what may be rock’s best-ever rhythm section, Wyman remains a refreshingly humble and down-to-earth character. The notion of an egoless rock star may seem oxymoronic, but Wyman turns out to be the ultimate embodiment of just that. “I don’t need an ego,” he says. “I never did. Charlie Watts is the same. Charlie didn’t give a shit about any of that. We’d just do it, get on with it and go home, or back to the hotel. And I’m still like that.”

As he looks back on the last 20 years of his life and career, the affable, perennially youthful Wyman peppers his conversation with wry laughter as understated as his playing style, onstage demeanor and personality. “In ’91, the Stones had a big business meeting,” he begins. “They were about to sign the contract with Virgin, and I said, ‘I won’t be doing that, ’cause I’m leaving.’ ‘No you’re not,’ they said. ‘You can’t leave.’ ‘Well, I am.’ Bless them, they didn’t believe me for two years; they left the door open until they were ready to go out on the ’94 tour. And in late ’93, Charlie and Mick came ’round and said, ‘Is it definite? Have you left?’ I said, ‘I left two years ago.’” 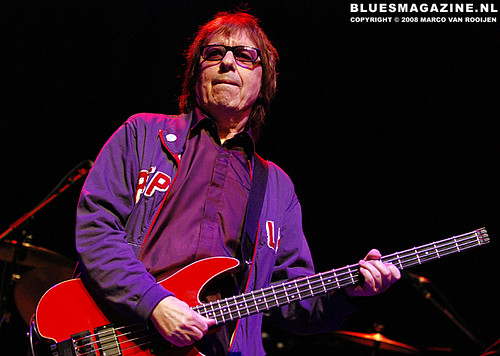 “So then I thought, maybe I should do some music on the side, but not heavy; I don’t want to have to worry about charts, image and all that crap. It’s not gonna be a career move — I’m just gonna do it for the fun. I got together with my mate and right-hand man Terry Taylor, and I said, ‘Let’s do something.’ We were gonna just do a blues duo and call ourselves the Dirt Boys, and we started to rough up ideas. And then, when we decided to go into the studio just for a couple of days, we thought it might be nice to have a drummer, and, of course, a piano player would be good. So I just phoned up a few mates.”

His first calls were to Fairweather-Low (who’d been part of Wyman’s ’80s group, Willie & the Poor Boys, the stylistic forerunner of Bill Wyman’s Rhythm Kings), Graham Broad and pianist Dave Hartley, who went on to work with Sting. “We went into the studio, and I said, ‘We’ll cut anything that meets my fancy,’” he continues. “I dug out a list of early music that I liked and thought might be good to do. It ranged from Louis Armstrong, Billie Holiday, Fats Waller, Ray Charles, into the early rock ’n’ roll, like Louie Jordan and Cab Calloway — all the way back to the ’30s and upwards. So we went in for three days and cut eight tracks.”

The numerous live-performance videos uploaded on YouTube by fans show various configurations of Bill Wyman’s Rhythm Kings but a palpable spirit permeates every clip. All the musicians appear to be totally blissed out, none more so than Wyman himself, reveling in the experience of simply being one of the guys, making music with friends. “We have a ball,” he says. “There’s nothing nicer than doing a two-hour show and seeing the entire audience standing and applauding through the last few numbers — and they keep doing it for another 10 minutes after we go back to the dressing room. And it’s night after night.”

“I discovered that I could write songs in the old styles, because I would analyze the way they did the arrangements, the way the instrumentation sounded, the way people sang and the slang they used for the lyrics. And in the end, the track, when we’d finish it, would sound like a song from the ’30s, ’40s or ’50s. It’s almost like an archeological dig into music. But there are very few bands that have the depth and versatility of my band in doing a total mixture of music. We play blues, reggae, soul music, gospel-y stuff, jump music, early rock ’n’ roll, we do ’70s stuff — it’s a whole mixture. We can do anything.”

As prodigiously talented as Wyman’s band is, it’s almost as if Bill Wyman’s Rhythm Kings have been hiding in plain sight all these years. Part of it has to do with Wyman’s aversion to globetrotting — one of the primary reasons he left the Stones after 31 years of it. He’s now happy to play anywhere — as long as the band can get there by bus, train or ferry, meaning no further from home than Eastern Europe. “We don’t seem to go to another level, because I just don’t travel anymore, which disappoints the band a bit,” he acknowledges. “But that is not what we do it for. We have a really nice time playing music that grabs us and we go home with smiles on our faces, just like the audience does. That’s really all it’s about.”

And in purely musical terms, that’s more than enough. Bill Wyman just can’t help keeping it down to the real nitty-gritty as he continues his single-minded career path. “Whether it’s been the right direction or not, I don’t know,” he reflects. “But I’ve enjoyed it.”