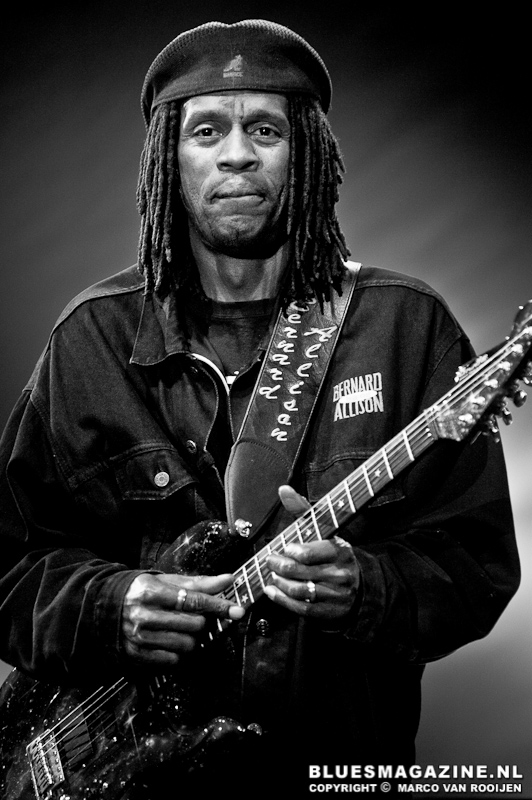 Bernard Allison is unstoppable. He’s the face on the magazines and the voice on the radio. He’s the showman roaming the open road on the 2018 Blues Caravan tour, bringing it to the people each night with compadrés Mike Zito and Vanja Sky. He’s the visionary songwriter whose latest studio release – Let It Go – is already tipped as an album of 2018. It’s a work ethic that would leave most musicians gasping, but for this creative dynamo – now entering his fifth decade at the head of the blues pack – it’s all in a day’s work.

Starting the blues calendar with a bang in January 2018, Let It Go feels like a homecoming. After all, this latest studio album sees Bernard return to Ruf Records: the iconic German label that was created in 1994 to serve as a home for his father, the much-missed Chicago heavyweight, Luther Allison. Just as significant, Let It Go also found Bernard recording in the birthplace of the blues – Tennessee – and returns his sound to its raw fundamentals, on 12 songs that hold up without embellishment. “Let It Gowas recorded at Bessie Blue Studio, Stantonville, Tennessee, with legendary music producer Jim Gaines,” recalls Bernard. “We made the decision to not flood the CD with keyboards or horns, to go back to the true basic rhythm section sound – and to show more mature songwriting.”

Since he opened his solo account in 1990 with The Next Generation, Bernard’s songwriting has been on a steep upward trajectory, and Let It Go represents a new peak. On a twelve-song tracklisting, Cruisin For A Bruisin opens proceedings in style, with a clipped funk-blues lick and a lyric that sums up Bernard’s existence since he first guested with his father in the late-’70s (“Gonna groove on down this highway, got my guitar in my hand”).

Same Ole Feeling pines for an absent lover over glassy wah chords, while the upbeat Backdoor Man finds Bernard with a .44 in his hand, investigating a disturbance and fretting that his girl is cheating. The powerful title track calls time on a worn-out relationship (“Our tears are falling, and our river’s run dry”), while Night Train tells of earning a crust in the blues joints of Chicago, set off by a snakey, soulful guitar solo. As for Leave Your Ego, this rough-edged Hendrix-worthy blues tips a hat to Allison Snr. “It’s all about my dad’s saying: ‘Leave your ego, play the music, love the people’. We honour that quote everyday…”

As a questing artist who once noted that “blues is about experimenting”, Bernard isn’t afraid to twist the blueprint on Let It Go, evidenced by moments like the jazzy scuttle of Kiddio, or the closing acoustic lament of his father’s Castle. Yet the bandleader still wears his love for the genre proudly, most notably on Blues Party, where he imagines a celestial jam session with a house band including fallen titans from John Lee Hooker to Robert Johnson (“They’ll be hangin’ out in heaven/A blues party that never ends”).

No doubt, Luther is also looking down – and he’d surely be proud of his youngest son’s achievements to date. Born in Chicago on November 26th, 1965, Bernard spent his formative years absorbing the blues greats – from T-Bone Walker to B.B. King – through his absent father’s vinyl collection. His own talent was announced at the age of 13, when he surprised Allison Snr by playing along with his first record, Love Me Mama, note-for-note. “He freaked out and said, ‘Tonight you’re gonna record with me’. That was my first recording. I played You Don’t Love Me No More and Sweet Home Chicago.”

Following that first live appearance in Peoria, Illinois, Bernard juggled his education with regular sets on the Allison stage, and his reputation was soon so established that he went direct from high school into the great Koko Taylor’s Blues Machine. As he once recalled: “Koko and Pops Taylor taught me the dos and don’ts of the road.”

By the ’80s, Bernard was moving in the orbit of fellow gunslingers like Stevie Ray Vaughan – a friendship that brought further colours to his dazzling guitar palette – and in 1989, he echoed his father’s decision to embrace Europe, taking up residence in Paris. The release of The Next Generation in 1990 proved the starting pistol for an astonishingly prolific solo career, and in 2018, Bernard can look back on an acclaimed early catalogue that takes in Hang On, Funkifino, No Mercy, Born With The Blues, Keepin’ The Blues Alive and Times Are Changing. Since the millennium, releases have included Across The Water, Storms Of Life, Kentucky Fried Blues and Higher Power, while in recent times, there’s been the Energized live release, the collaborative Allison Burnside Express alongside Cedric Burnside and 2015’s In The Mix. Like we say: he’s unstoppable.

It’s an auspicious catalogue by an acclaimed genre heavyweight – but Let It Go is a potent reminder that for Bernard Allison, there’s always another gear. “We all just came together as a group to create this album,” he considers, “to show our chemistry as friends and bandmates. My favourite memory was watching the faces of everyone involved in the session. Everyone came to lay it on down and gave 110%…”