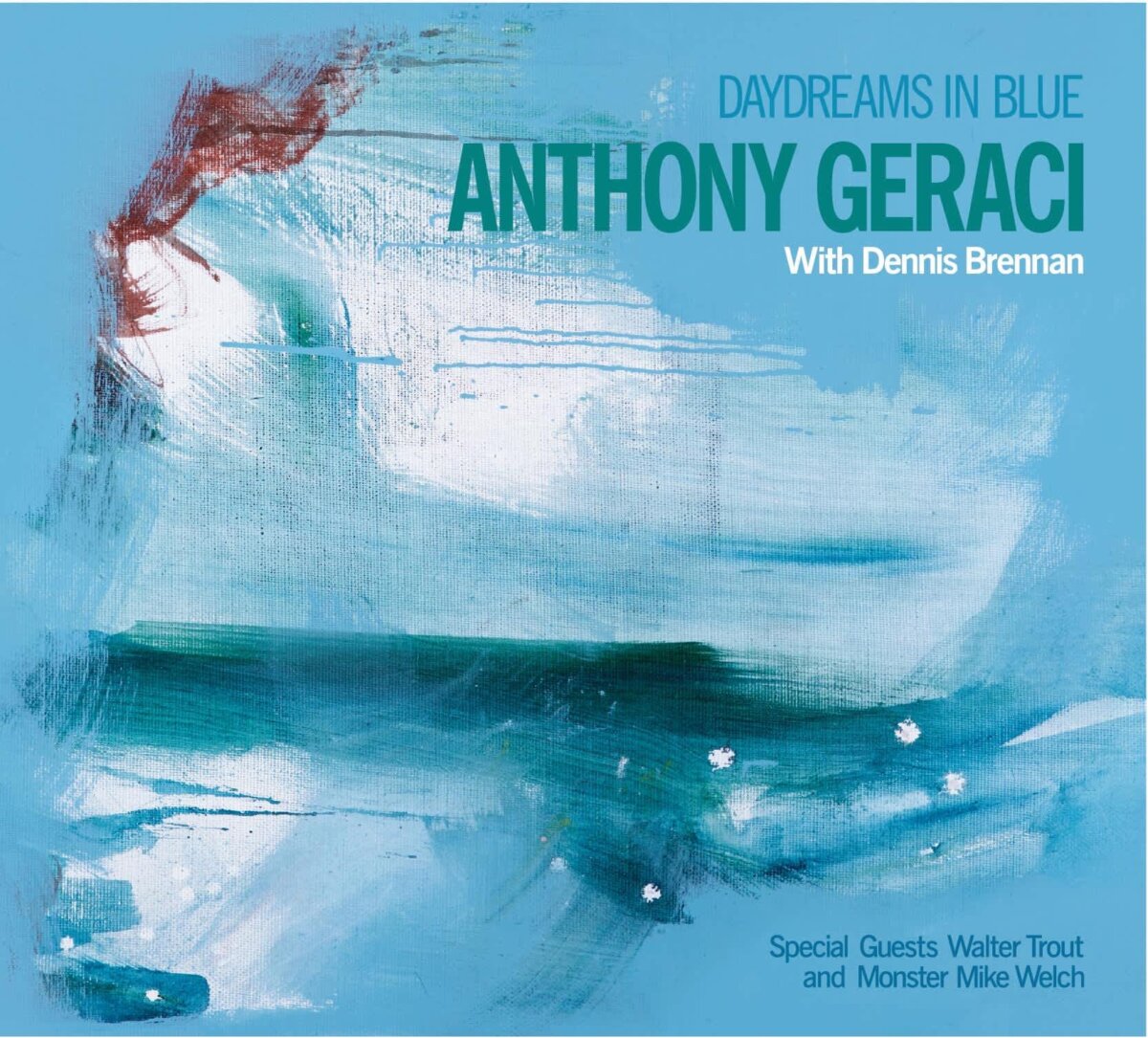 Boston-area-based pianist/songwriter Anthony Geraci follows up his multiple Blues Music Award nominated recording, Why Did You Have To Go, with Daydreams In Blue, on Shining Stone Records. Originally scheduled for release in April, because of the coronavirus pandemic the album will now be released on July 10. Boston roots/blues music hero Dennis Brennan is the featured vocalist and adds harmonica on two tracks. Daydreams In Blue also features special guest appearances from guitarists Walter Trout and Monster Mike Welch. This 12-song CD has Anthony writing 10 new originals, one tune penned by Dennis Brennan, Peter Wolf (J. Geils Band) and Troy Gonyea; and a classic blues composition by Earl Hines and Billy Eckstine (“Jelly, Jelly”). Anthony’s scintillating piano is the binding factor here, embellished by the rhythm section of Jeff Armstrong and Michael Mudcat Ward, two of Boston’s finest.

“This by far is the most exciting recording I’ve done under my own name,” Geraci says about the album sessions. “Having all these great musicians on the recording is a ‘Daydream’come true. And having Walter Trout on the song, ‘No One Hears My Prayers,’ is something that transcends beyond just a recorded track. Musicians supporting each other, willing to give themselves to others is something we should all aspire too.”

“Music- all kinds of music – defines my life; and many of my friends, whether they are musicians or fans,” he says. “Where do we retreat to when things just aren’t right? A song is where I go to. It could be a song by Muddy Waters, John Coltrane, ‘New World Symphony’ by Antonín Leopold Dvořák, or a Hank Williams tune – it’s all music. Or I go to my piano and just play. The compositions on Daydreams in Blue were written over about a year’s time, some only a few weeks before the recording session. I’m very sensitive as to who I may want to bring into the recording studio. I have a vision for each song and who I’d like to have play on it. Immediately after I wrote ‘No One Hears My Prayer,’ I thought of Walter Trout. We had done a few shows together recently and he graciously asked me to sit in with his great band a few times. But it was his sound, his spirit that made me want to ask him. Mike Welch has been my friend for a very long time, since the original House Of Blues was in Cambridge, Massachusetts, where
I was part of the Blue Monday Band. He was in his early teens and was already (almost!) as good as he is today. Dennis Brennan is truly a roots music hero here in Boston – his vocals and harmonica playing captures the soul of a bluesman – straight from the heart. Check out his ‘Dead Man’s Shoes’composition.”

Anthony Geraci has a long history in the American Blues Community. He is an original member of Sugar Ray and the Blue-Tones, and Ronnie Earl and the Broadcasters; he has recorded with both artists extensively. Anthony has been nominated for the prestigious Pinetop Perkins Piano Award for the last five years: 2016/2017/2018/2019/2020 by the Blues Foundation in Memphis. In 2019, Anthony received nominations from Living Blues Magazine: Outstanding Musician- Keyboard; Traditional Blues Album/Blues Band of the Year/Male Blues Artist from Blues Blast Magazine; and Best Traditional Blues Band from Making-a-Scene.

Anthony’s last recording, Why Did You Have to Go (Shining Stone), received world-wide accolades. It debuted at #4 on the Living Blues Radio Chart, and was in the top 50 most played recordings for 36 weeks on the Roots Music Report. 2019 Nominations from the Blues Foundation included: Album, Traditional Album, Song of the Year (“Angelina, Angelina”), Traditional Male Blues Artist, Band of the Year – Anthony Geraci and the Boston Blues All-Stars.

Anthony has been featured on over 50 recordings with some of the biggest names in blues music. He has recorded with blues pioneers: Big Walter Horton, Carey Bell, Odetta, Big Jack Johnson, Charlie Musselwhite, Lazy Lester, Snooky Pryor and John Brim; as well as contemporary artists: The Proven Ones, Kenny Neal, Sugaray Rayford, Debbie Davies, Otis Grand, Welch/Ledbetter, Zora Young, and Duke Robillard; and garnered a Grammy nomination for his playing on the Super Harps I album (Telarc).

The Proven Ones – You Ain’t Done

Anthony Geraci – Why Did You Have to Go

Recensie: Anthony Geraci – Why Did You Have To Go