Ana Popovic is widely regarded as one of world’s very best female guitar-players. Her new album, “Unconditional,” was recorded at the famous Piety Street recording studios in New Orleans and is Ana’s sixth studio release. It was produced by Ana Popovic and Grammy Award winning producer John Porter. “I recorded in eclectic cities like Memphis and Los Angeles, but always wanted to go to New Orleans to capture something of their rich musical history,” says Popovic who was born in Belgrade, Serbia. “I loved being in New Orleans for a period of three months. I love everything about that city – its vibe, spirit and optimism, and not to forget, hospitality and kindness of the people. I think it influenced the album in more ways than just musically.”

Popovic was recently honored to appear as a special guest at B.B. King’s German shows. Her previous studio release, “Still Making History” made its way to #3 on the U.S. Billboard blues chart for a total of 19 weeks. On 2011’s “Unconditional,” Ana truly is a guitar goddess – illustrating a daring slide on a powerful guitar record that presents a soulful fusion of contemporary and classic blues. The album features a representation of New Orleans’ finest musicians such as renowned slide guitarist Sonny Landreth, the amazing Jon Cleary and David Torkanowski on Hammond B3 and piano, Calvin Turner on bass and Doug Belote on drums. “I was fortunate to have the fabulous Sonny Landreth – my slide idol since my Belgrade years – to play on the album, a dream come true,” says Popovic. Also the incredible harp player Jason Ricci makes a guest appearance.

Of the album’s twelve songs, eight are originals by Popovic, from which two are co-written by writing partner Mark van Meurs. Also on the album are songs gleaned from the rich blues history done by some of Ana’s favorites, including Koko Taylor, Buddy Guy, Otis Spann, Nina Simone and Sugar Pie DeSanto. “The title ‘Unconditional’,” Ana explains, “describes what I feel on stage. That place is simply unconditional. It is magical. It’s just me and my guitar, notes, sounds and drum grooves. I let the band lift me up, and I feed off of their energy. I hate to think when playing. I only feel. Unconditional is how I stand towards my music – it’s mine, it’s sacred, and it’s with no boundaries – absolute, definite. I tend to put everything I have into it and don’t let anything or anyone get in between, except the people that truly inspire me.” 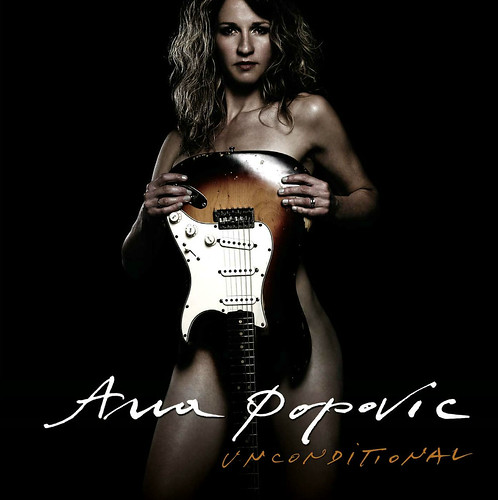