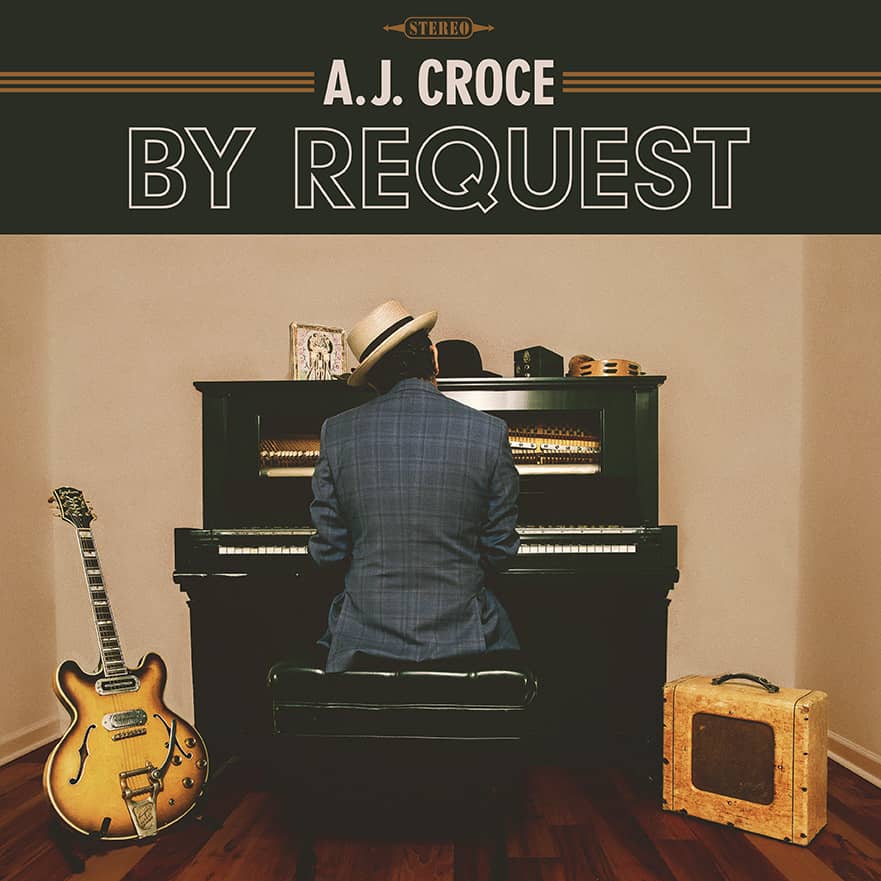 Over the past three decades, A.J. Croce has established his reputation as a piano player and serious vocal stylist who pulls from a host of musical traditions and anti-heroes — part New Orleans, part juke joint, part soul. While his last album, JUST LIKE MEDICINE, paired him with soul legend Dan Penn and an all-star cast of players, his new album was born of memories — of favorite artists and shows, but mostly, of late-night gatherings with groups of friends, many of them fellow musicians, with Croce at the piano taking requests. Croce revisits these musical evenings on BY REQUEST, 12 personally curated covers that traverse decades and genres, propelled by his spirited, loose-and-easy piano mastery and emotive vocals.
It’s a tribute to Croce the music fan as well as Croce the musician that both the variety and execution is inspired, aided by a full band and horns.
BY REQUEST is the first album Croce has released since losing his wife of 24 years, Marlo Croce, after a sudden heart ailment. It’s also the first album by Croce to feature his full touring band: Gary Mallaber on drums (Van Morrison, Steve Miller band), GRAMMY®-winning bassist David Barard (Allen Toussaint, Dr. John), and up-and-coming guitarist Garrett Stoner.

From sharing an obscure song by Motown artist Shorty Long, “Ain’t No Justice,” to his funky, dead-on version of Billy Preston’s “Nothing from Nothing,” Croce keeps the virtual party hopping. While he delivers faithful recreations of such nuggets as The Five Stairsteps’ “Ooh Child” and Allen Toussaint’s “Brickyard Blues,” he puts his own spin on piano-driven arrangements of songs by Neil Young, The Beach Boys, Sam Cooke, The Faces and more. Young’s “Only Love Can Break Your Heart is reinterpreted as a gospel song, and the Beach Boys’ “Sail On Sailor” becomes a trippy, rollicking ride. “I reimagined the arrangement, wondering how Willie Dixon would have recorded it if he were on psychedelics,” Croce explains.
Guitar legend (and Croce’s East Nashville neighbor) Robben Ford guests on a version of folk/blues greats Sonny Terry and Brownie McGee’s “Better Day” with stellar results. “I’ve loved Sonny and Brownie since I first heard them. This song was the first tune I learned on guitar. I added quite a few chords in my arrangement, but what’s new,” he quips.

Although he lost his famous father, music legend Jim Croce, when he was just two years old, he pays tribute by covering Randy Newman’s “Have You Seen My Baby” since the first show he attended was a bill featuring his dad and Newman. “I love so much of his music, and while this is by no means my favorite of his, it’s been a request at soirées. I sort of treated it as if Little Richard sat in with The Flaming Groovies and played it like I was 15, with reckless abandon.”
“BY REQUEST is my way of inviting you over for a private gathering at my place,” Croce says of the collection. “We listen to great music, laugh, make great food and after a few drinks and maybe a few more we end up in my music room and I start taking requests of every genre and era. The music is always fun and completely diverse. We’ll play and sing all kinds of music. Some of my friends are professional musicians, some do it for fun and many friends are just serious music fans. So you’ll fit right in.

“There’s no way that I could record the thousands of songs I’ve performed at home over the years, nevertheless every song on this album has been requested by close friends who have hung out at my place many times for many years. “Welcome to my home, by request, you’re hereby invited to join the party.”